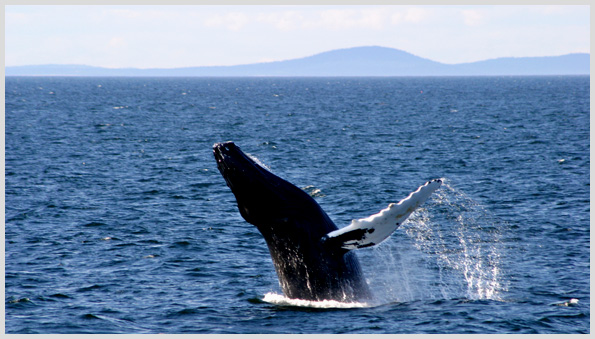 Photo courtesy Alied Whale, College of The Atlantic, Bar Harbor
I spent time recently looking into the eye of a chicken. Actually it was quite a chicken, a golden bird fat as a pillow that clucked and fluttered with great intensity as she pecked at grain in her yard. What struck me most was the absolute vacuity of her eye. It was indeed an eye, but if it was a window to the soul then the soul of a chicken is very, very dull. This got me thinking about the relative size of animal brains, particularly those of marine mammals. You may have gone to Harvard and Yale and graduated summa cum laude but nevertheless, your brain weighs about the same as mine, a little over three pounds, or 1,500 grams. Out in the Gulf of Maine, however, swim really big brains. Fin whales, huge sleek animals marked with a delicate chevron pattern on their skin, have brains that weigh about 7,000 grams (15.5 pounds). An orca whale brain might weigh about 5,600 grams (12 pounds). A bottlenose dolphin has a brain that weighs about the same as a human’s, about 1,600 grams (3.5 pounds). Yet all these creatures are dwarfed by the mighty brain of the sperm whale. Denizen of the deep, protagonist of Moby Dick, swimmer throughout the world’s oceans, the sperm whale has a brain that weighs about 9,000 grams (19 pounds). That, fellow brainiacs, is a big brain. Feeling somewhat awed by the relatively diminutive stature of my grey matter, I decided to look into the relationship between brain size and intelligence. Most scientists who specialize in evolution say that neither the weight of a brain nor the relationship between body size and brain weight have anything to do with the relative intelligence of a creature. Whew! thought I. What a relief. But if that is true, then what are those whales and dolphins doing with all that brain matter? The structure of our brain influences how we use it. Scientists studying the human brain discovered that certain activities come from certain parts of the brain. They know that the front part of the human brain, the forebrain, is used for thinking. In mammals, the forebrain is highly developed with an extremely crenellated, or folded, surface that enables it to contain millions of interconnected neurons. Some researchers believe that the amount of forebrain folding relates to the intelligence of a creature. If this is true, dolphins are smarter than humans, because they have twice as many folds than are found in a human brain. The forebrain is also the part of the brain that allows for complex behaviors, such as working together in a group or understanding social hierarchies. So it is very likely that whales and dolphins use part of their big brains to interact with others of their species. Through songs and other vocalizations, many whales convey what can only be termed information to each other at great distances. But is it intelligence? I doubt that my chicken companion would be able to learn many new things once she’s figured out where the grain is. But some marine mammals, such as dolphins and orcas, have a great facility for learning. Fans of aquariums are amazed by what these captive animals are capable of learning. Aquarium whales seem to learn by imitation, even going so far as to imitate the sounds made by their human trainers. Furthermore, when bored, captive dolphins and orcas will make up their own tricks and maneuvers which some say indicates their high degree of intelligence. I truly can’t say without years of study if whales and dolphins experience intelligence in the same way that we, with our puny three pounds of grey matter, do. Their bodies are much larger than ours, thus requiring more brain circuitry to operate properly. In fact, scientists believe that a whale’s brain never actually sleeps, as our human brains do at the drop of a hat. While it appears to be dozing, a whale’s brain may remain partially awake and aware of what is happening around it. Which makes sense when you consider that marine mammals, unlike us, do not breath automatically; they breathe consciously and must rise to the surface to do so. When I’m snoring in my bed, I breathe without effort; a completely unconscious whale could not do the same. Thus on the one hand I can look at that golden chicken with a self-satisfied gloat; my brain is considerably bigger than hers. On the other hand, there are creatures in the deep that have vastly larger and as complex brains than mine. Who knows what they are thinking?

From Classic Icon to Iconoclastic