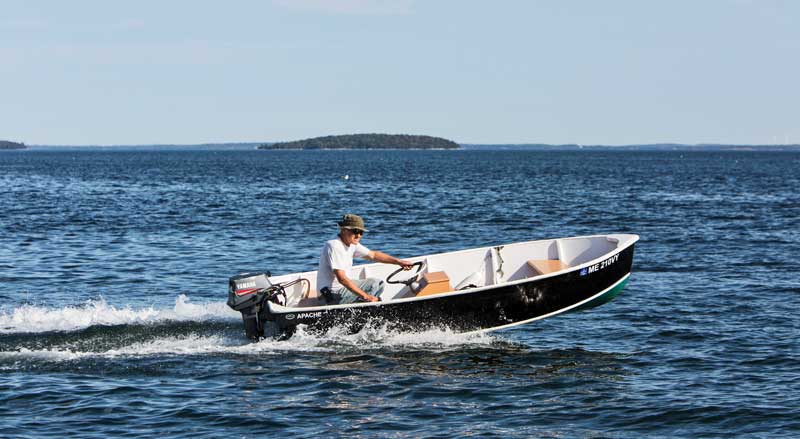 David Emery unwinds Apache on the outskirts of Camden Harbor. The zippy tender is a replica of one he enjoyed when he was a teenager.

In 1962, when David Emery was 12 and a deckhand on the Axel D, a 42' motoryacht based out of the tiny island port of Dark Harbor, Maine, he fell in love with the yacht’s utility boat. Emery was accustomed to the round-bottomed rowboat that he and his father used for herring seining. By contrast, this 12-foot tender was fast, stable, and worthy of ogling. With its 10-hp Evinrude, the boat planed off nicely, a delight that Emery had never experienced in a small boat.

“The boat lured me over,” he said recently.

Emery worked on the Axel D for three summers. When his chores were complete, he had permission to use the tender on his own. He once made the 9-mile trip to Camden in the utility boat, navigating West Penobscot Bay’s deep-water channel. The little boat was comfortable and seaworthy; it cut through the waves with grace. 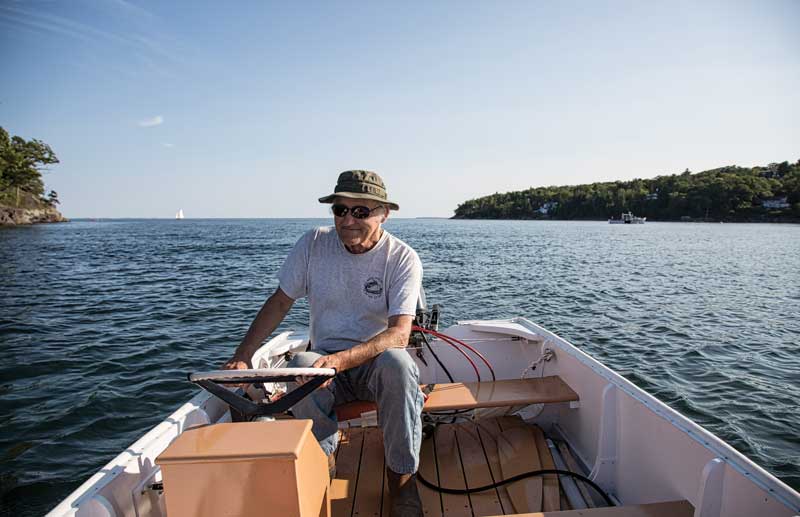 Emery chose to outfit Apache with a steering wheel for ease of handling.

By the mid-1960s, Emery was too busy seining to return to his deckhand job, yet he never forgot the tender.

Fast-forward to 2016 when Emery needed a new tender for his lobsterboat. Frustrated with a long line of tippy predecessors, he decided to realize his longstanding dream and commissioned Bill Buchholz of Apache Boatworks in Camden to construct the first Dark Harbor tender in more than 60 years. 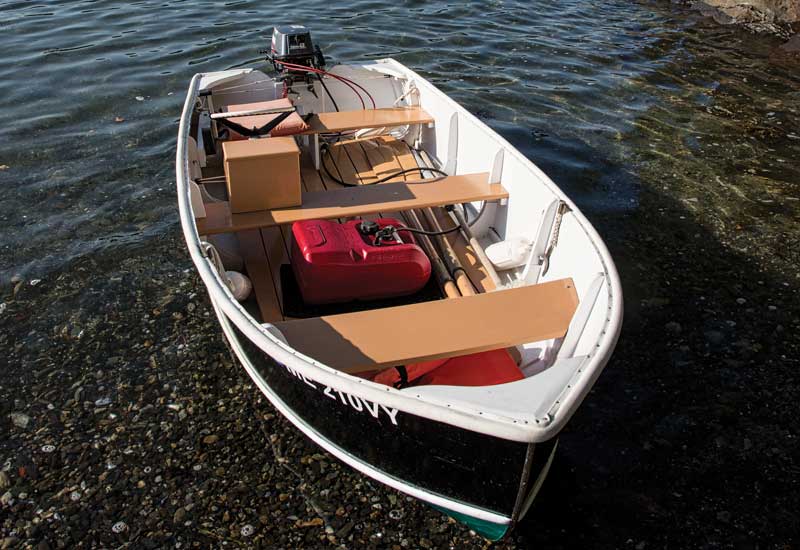 The paint scheme mimics the original tender, which in turn was painted to match its mothership, the Axel D.

Emery was not alone in his early adoration of the tender. The Axel D’s captain, Donald Rossiter—who has remained a lifelong friend of Emery’s—held a similar fondness toward the utility boat.

“I enjoyed it more than any other boat I’ve been in,” said Rossiter, who worked as a yacht captain for 50 years. Rossiter had chosen the tender for its stability; a person could walk around the boat balanced on its gunwales while polishing the morning dew off a yacht’s hull.

“It was the perfect utility boat,” he said. Then he grinned, “but the main thing: it was fast.” 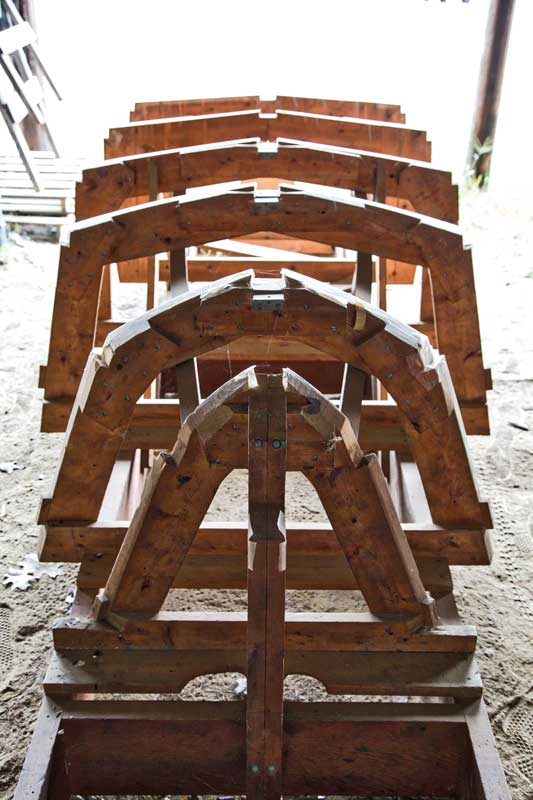 The original 1954 jig used to build Apache was built and designed by Al Norton who, at the time, owned Dark Harbor Boat Yard. The tender was designed and built in 1954 by Al Norton, then the owner of A. I. Norton & Son, a yard on 700-Acre Island, a stone’s toss from Islesboro’s Dark Harbor. Norton envisioned the design as the ideal tender for the summer yachting community.

In 1957, Rossiter recommended that the Axel D’s owner, Cortland Gross—then the president and CEO of Lockheed Martin—purchase the last of Norton’s boats. Gross agreed. It cost $600, and it remained the tender for Rossiter’s 25 years aboard the Axel D.

Over the years, as he cruised Maine waters and beyond, Rossiter regularly felt  he had the prettiest little dinghy on the coast. The boat’s tumblehome and shapely bow made it an eye-catching sight.

Despite its good looks and usefulness, the Dark Harbor tender’s regional glory was short-lived. After the original six, Norton ceased production. Rossiter has long assumed that the limited production run was related to the emergence of the Boston Whaler 13 on the small-craft market at around the time he purchased the Axel D’s Dark Harbor tender.

“You remember, all of a sudden, everything at Norton’s was Whalers,” Emery reflected when I met up with the two old friends in Emery’s Camden workshop.

After active service in the Vietnam War, followed by a stint in the construction industry, Emery returned full time to fishing. Nowadays, in addition to lobstering, he caretakes a small island east of Camden. Over the years, Emery revisited to what today is called Dark Harbor Boat Yard, always making sure to check the rafters where the jig for the tender hung, decade after decade, untouched.

“Like in Citizen Kane,” Emery said. “It was my Rosebud.”

About 10 years ago, at a local gas station, Emery watched a pickup pull in with a boat in its bed; he recognized the tender’s blunt bow immediately. During a conversation with the boat’s owner he learned it was the same tender he had piloted as a youth. Emery offered to buy the boat on the spot, but the man declined, saying he planned to rebuild it.

More years passed before Emery finally decided to spearhead the revival of the design himself. Over the course of his Dark Harbor Boat Yard visits, Emery had befriended the current yard manager who agreed to loan him the old jig. The manager also tracked down another one of the original tenders. While it was derelict, Emery believed it might prove useful as a guide for Buchholz.

Emery had hired Buchholz a number of years earlier to rebuild the cabin on his lobsterboat Late Nite, a 28' Blue Hill Marine, and the boatbuilder had impressed Emery with his aptitude and attention to detail.

Likewise, when the old tender first arrived at Buchholz’s shop he was surprised by its quality. And Al Norton’s craftsmanship didn’t end with the boat.

“The building jig was well thought out and well built, and very accurate,” said Buchholz. “It was already fair. I didn’t do anything to it really except for clean off all the dust.”

The project was unique in that Buchholz had no building plans. Instead, he had a decaying boat and the old jig it was built atop. Buchholz likened the process of building the tender to the peeling of an onion. In other words, the nuances of the design became evident over time.

“The more you need to see the more the boat reveals,” explained Buchholz.

When the jig proved vague—Should the insides of the frames be square or beveled? How high should the seats be off the bottom? What was the angle of the quarter knees?—he would stroll out his shop door and check the old tender resting in the grass.

Of course, Buchholz could have built a tender straight from the jig, but the reproduction would have been less exacting and he would have missed the interplay between old and new.

Buchholz noted that any person building wooden boats today carries some sense of continuity with their boatbuilding forebears.

“When you look at the 18th century photographs of the shipyards you see the same tools I have here,” he explained.

A supply of crooked locust that Buchholz had on hand was used for the framing. Locust is ideal for boatbuilding, he explained, on account of its durability, its rot-resistance, and its growth patterns that often mimic specific hull shapes. Thus, the bottom frames and the stem were fashioned from single pieces of wood. 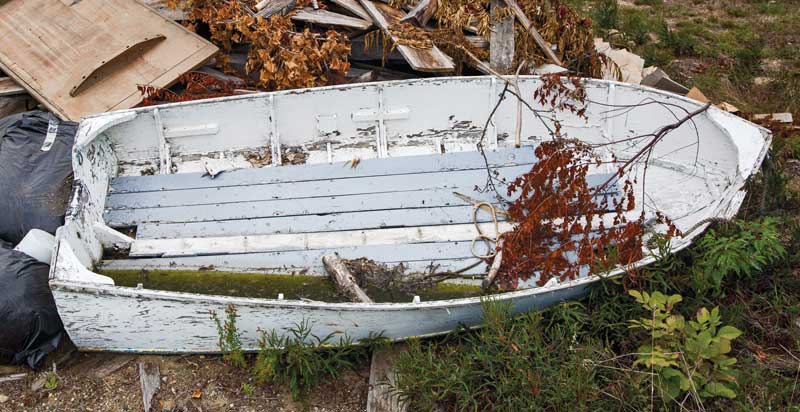 The original tender that Buchholz referred to during the building process now rests on the burn pile at Emery’s family farm.

Buchholz described the tender’s hull shape as a warped bottom, meaning it is fairly sharp up front and then it evolves into a shallow deadrise at the transom. The hull is planked with Okoume marine plywood; the sides are ¼" and the bottom is 3⁄8"—the bottom is covered with two layers of 10-ounce cloth set in epoxy. The transom is cut from ¾" Sapele plywood. The keelson is Douglas fir and the skeg is oak. The seats are pine, straight from the lumber pile of Emery’s late father. Finishing treatments include pine floorboards and canvas gunwale guards.

Emery chose to paint the hull black and to balance the interior between white and tan, a scheme that matched the tender of his youth.

A few years after the gas station sighting, that original tender finally did find its way back to Emery. But by then most of it had rotted.

“I kept the spray rail,” he said, motioning toward a slender length of patina-tinted wood that hung from his workshop ceiling. “That and the oars are all that’s left.” The Sitka spruce oars, feather light, were sanded and re-painted and now rest atop the floorboards of the new tender. Out of appreciation for Buchholz’s work, Emery christened the boat Apache. The name also appealed to his inner rebel.

“I wanted to relive my childhood,” said Emery, chuckling.

Emery has asked Buchholz to build a second tender, and once it is complete, the boat will be loaned to Dark Harbor Boat Yard as a token of thanks.

When I asked Buchholz what was remarkable about the Dark Harbor tender he said that it was a throwback to the 1950s era of hard-chine motorboats that blossomed as plywood and outboards became more reliable and affordable.

“The boats were fun,” Buchholz said, “plans were all over the place. Any guy with a garage could build one. This boat harkens back to that great optimistic time.”