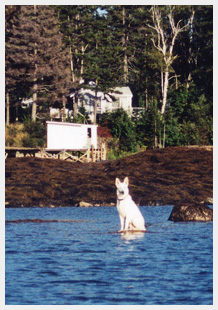 Glacier, photo by Ava Brown
Glacier waits for his pal, Ava Brown, daughter of the owner of West Bay Boats of Steuben. The shop just launched a new boat, and Ava is aboard at the mooring, cleaning up and taking photographs. Glacier—an appropriate name for an all-white shepherd, is it not?—was left behind on the beach to stand watch, which he did by staking out a position on a low-tide ledge. There he sat, unaware of the rising tide, his only concern being to be as close to Ava as possible while guarding the shore against—what?—footpads? out-of-town clam-diggers? marauding pirates? “Silly boy,” Ava said. “Silly?” Glacier thought. “So she wants to face Blackbeard all by herself?” Meanwhile, the tide kept on rising until Glacier was surrounded by water. Now Ava knows that she has a rarity: a boatyard dog who doesn’t like to swim. Glacier will have to be rescued by rowboat. Glacier may be a chicken when it comes to the water (he entered the internationally renowned World Championship Boatyard Dog Trials® in 2003 with his girlfriend Wynter, another shepherd, and refused to get his toes wet then, too), but he’s a tough old buzzard nevertheless. Last August he went into the hospital for major surgery and within just a few days he was back in the boatyard, keeping the piratical swine at bay. “Glacier has touched the hearts of many with his love and loyalty,” Ava Brown says. “Mine most of all.”