Our boat, the schooner Surprise, which has been listed on the National Register of Historic Places, turned 100 this spring, giving us the chance to celebrate both her historic past and our future as a young family making a living on the water in Maine.

Surprise has been a part of Camden’s passenger daysailing fleet for 32 years. She became part of our family—my husband Ramiro, daughter Delfina, and me—when we bought the schooner from Captains Jack and Barbara Moore in 2014.

Built by the Waddell Shipyard in Rockport, Massachusetts, for Martin Kattenhorn as a racing and cruising yacht, Surprise slid down the ways in 1918. Kattenhorn had commissioned well-known fishing schooner designer Thomas McManus to design a boat for racing and cruising that could be safely sailed by a crew of no more than three people. A two-masted schooner, Surprise is 57 feet overall, 44 feet on the water, with a 12-foot beam, a 7-foot draft, and displacement of 21 tons. Her topsail schooner rig allowed Kattenhorn to fly a mainsail, foresail, staysail, jib, main topsail, and a fisherman staysail. She proved to be quite speedy. In 1923, Surprise captured sixth place in a fleet of 22 vessels in the first race to Bermuda after World War I.

Kattenhorn was a founding member of the Cruising Club of America, and Surprise carried the club’s insignia from Bermuda to Nova Scotia and ports in between from 1918 until Kattenhorn’s death in 1959.

A series of owners continued to sail Surprise throughout the East Coast and the Caribbean until she was purchased by Ed and Cindy Benedict, who brought the boat to Falmouth on Cape Cod for restoration during the next three years and then for use as a passenger vessel. Captains Jack and Barbara Moore purchased her from the Benedicts in 1986 and brought her to Camden, Maine, where Surprise joined the schooner fleet. In 1991, Surprise was entered on the National Register of Historic Places, joining a handful of other midcoast-Maine-based passenger schooners on that list. Four major restoration projects in recent years have left the schooner in superb condition as it enters the next century.

I grew up in Camden and spent my youth sailing. After high school I sailed another schooner from Maine to Key West, Florida. There I met Ramiro, who is from Argentina, and we started sailing together. We worked for eight years on private yachts between Maine and the Caribbean before returning to Camden for the birth of our daughter, Delfina. We wanted to start our own business in Camden, while also staying on the water doing what we love. A friend suggested we ask the Moores if they would sell Surprise to us. We met with them and then waited more than eight years before they told us they were ready to retire and wanted us to take over. The Moores ran Surprise for 28 years.

We have been having an incredible adventure, taking guests sailing on Penobscot Bay out of Camden during the summer and fall. We spend the winter working on the boat and visiting family in Argentina. We also have expanded our fleet, with the purchase of another boat, the sloop Anjacaa, to be used for day sails and private charters. Next winter we will be sailing Anjacaa to the Bahamas for some adventures in new waters. 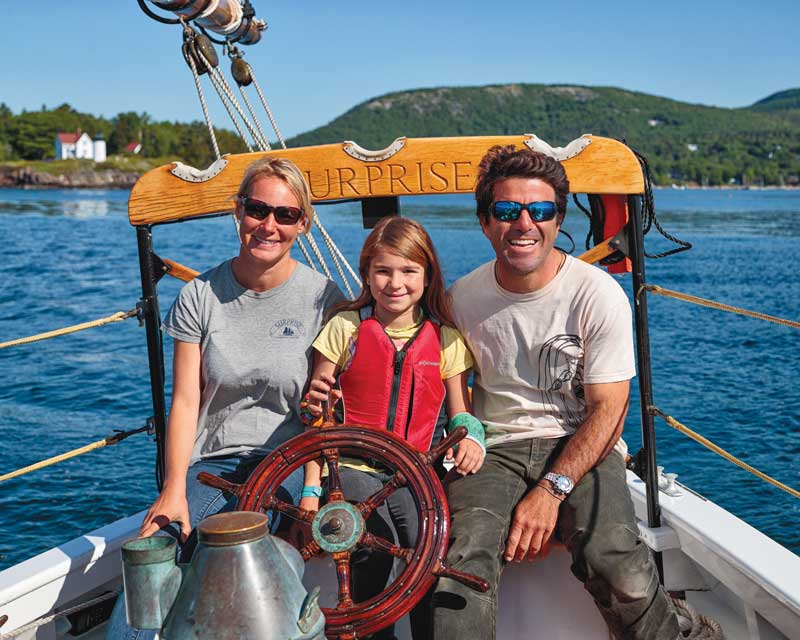 We bought Surprise because we wanted to raise Delfina in Maine. We were tired of having bosses and wanted to have our own business in Camden and to keep sailing. So here we are, celebrating the boat’s 100th birthday, and looking ahead to many more years of bringing people joy on the water.

Nicole de Acevedo Ramos grew up in Camden, Maine. She now lives in Camden with her husband Ramiro and daughter Delfina and sails the schooner Surprise daily from Camden Harbor from May to October.