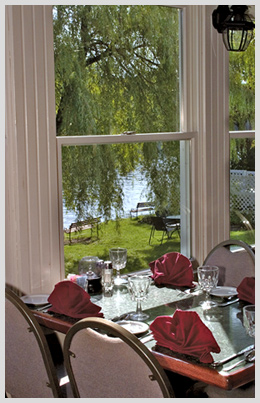 A dock-and-dine duck lover’s delight.
Photo courtesy the Village Inn.
As I am rather on the thin side, most people assume I don’t know anything about food. At least that’s what my wife is fond of saying, but what does she know? I’m 467 days older than she is, which means I’ve eaten 1,401 more meals than she has. In fact, according to my calculations, during my lifetime I’ve eaten 72,270 meals. Okay, okay, we have to deduct for a few skipped meals, and for a few that went down and came back up again. Call it 70,000. I’m still an expert. They also say I don’t know anything about duck, and they’re wrong about that, too. I’ve eaten everything from uncivilized duck to duck fit for kings, and I can tell the difference between the two. The former was a wild one on the wing from Newfoundland to Tierra del Fuego without stopping and was shot halfway down the line over Chesapeake Bay and was tougher than a boiled boot and tasted just like one. The latter was an elegant little number, the centerpiece of a multi-course dinner in an ancient inn not far from Windsor Castle on the River Thames in England. Eileen and I were on an extended trip by rowboat down the river and stopped at the inn for the night. “I’m sorry,” the innkeeper said, “we don’t serve breakfast in the dining room, only in bed.” (“Aw, shucks,” I whispered to Eileen.) “Our dinner specialty is duck,” she continued, “roasted on a spit in the living-room fireplace.” (“Kowabunga!”) So much for my credentials. I don’t remember when I first heard that the Village Inn in Belgrade Lakes specialized in duck—indeed, was famous far and wide for it—but for reasons that are not particularly clear, it took us a couple of decades to get around to see for ourselves. We found the inn in the heart of Belgrade Lakes, a tiny village on a short waterway connecting Great Pond with Long Pond. It’s a true dock-and-dine restaurant, with several finger piers on each pond to accommodate water-side cottagers who arrive by boat. The inn itself was once a Maine summer classic, but during an era when “old” meant ersatz-rustic—probably the 1970s, or perhaps the late 1960s—it was rehabbed with vinyl on the outside and barnboard on the inside, and with tables and chairs you won’t find in the old Parker House in Boston, if you know what I mean. But nobody comes to the Village Inn for the decor. They come for the duck. (Actually, the duck can come to you: The inn will ship two roast ducklings with stuffing and sauce for $85 plus s&h; see address below.) Eileen snapped open the menu and said, “Omigosh, we’ll have to come back.” That’s because the duck was prepared in a variety of ways, and who had the staying power to try them all? As an appetizer: Duck Tenders, duck breast baked in an almond crust ($8.95). Grilled Duck Sausage, with dried cranberry salsa ($7.95 for one; $12.95 for two). We shared one; it was excellent, reminding me of a fowl-based version of the custom frankfurters made at Curtis Meats in Warren, another story for another day. As a main course: 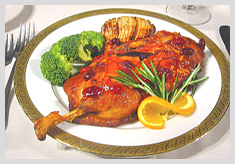 As duck should be—crisp outside, moist
inside. Photo courtesy the Village Inn.
One Half ($21.95) or One Quarter Roast Duckling ($16.95), served with a choice of these sauces: orange sherry, apricot, orange cranberry, wild Maine blueberry, raspberry, brandied black cherry, Thai lemongrass, sweet & sour, or Madagascar with green peppercorns. I had the last named; it had power without overwhelming the duck, which was roasted as duck should be—crisp on the outside, moist on the inside. Medallions of Duck Breast, with black cherry sauce ($23.95). Kicked-Up Duck, a pasta dish with fresh tomato sauce “kicked up a notch” with Creole seasonings ($22.95). Bourbon Street Duck, grilled boneless duck breast marinated in Cajun spices and served over jambalaya rice ($22.95). But duck is not all, though in the full dining room—with a lovely view of the water and the boats coming and going, I might add—only a few diners were having anything else. Deep down inside, the Village Inn is a Maine restaurant with everything that implies: i.e., lots of surf, lots of turf. Surf includes grilled salmon, Frutta di Mare (shrimp, scallops, mussels, lobster over pasta), crabmeat-stuffed haddock, broiled scallops, grilled trout, lobster, and more. Turf includes sirloin steak, grilled beef tenderloin, pork tenderloin, and a host of other choices depending on the specials of the day. Congratulations if you can handle dessert after any of the above. If you can, there are lots to choose from, but who could turn away from this description of their Creme Brulée ($6.95)?: “Our creme brulée is made with three quarts of heavy cream and 24 eggs. It is smooth, rich, and custardy.” Pluses: * The owner stopped by our table and seemed genuinely interested in whether we were enjoying our meal, even though he had no idea that I would be reviewing the restaurant for a Famous Magazine. * Our waitress, a school teacher on summer sabbatical, has worked at the Village Inn for 20 years, which says a lot for her skills and the management’s discrimination. * The above waitress took my order for a martini without asking whether that would be with gin or vodka. She didn’t have to ask, because she knew. A message to wait staffs of the modern era: a “martini” with vodka isn’t a martini; it’s something else. Minuses: * There are none, unless you’re expecting a gilt-edged dining room with haute cuisine served by waiters in striped trousers and starched shirts (“Monsieur et madame, le canard”), and prices to match. The Village Inn Belgrade Lakes, ME 04918 207-495-3553 www.villageinnducks.com Open 7 days a week, 5 p.m.-9 p.m.; closed early December through Easter.