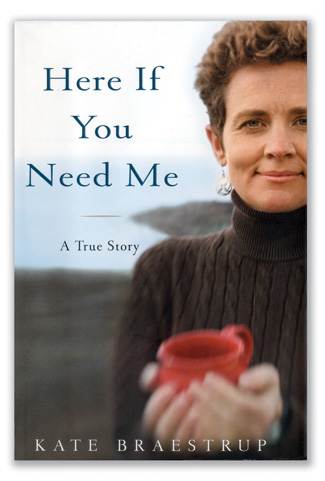 Here If You Need Me: A True Story
by Kate Braestrup Little, Brown and Company (2007); 211 pages, hard cover, $23.95 Along with their duties protecting fish and wildlife, Maine game wardens search for people who get lost in the woods, are perhaps injured, or meet a worse fate. They traverse steep terrain, scour back roads, enter rock crevices, and dive under water or ice while the missing person’s anxious friends and family members wait for news. Their chaplain is Kate Braestrup, and her true story, Here If You Need Me, is nothing like the woe-is-me or celebrity-driven memoirs that have lined bookstore shelves in recent years. “It’s so cool that the warden service has a chaplain to keep us from freaking out,” a frightened mother told Braestrup as searchers combed the woods for her six-year-old daughter who had wandered off while camping. “Ah,” the chaplain replied, “I’m not really here to keep you from freaking out. I’m here to be with you while you freak out,” later adding for readers, “or grieve or laugh or suffer or sing. It is a ministry of presence. It is showing up with a loving heart. And it is really, really cool.” Braestrup did not grow up religious or even attending church, but she loved and married Drew Griffith, a Maine state trooper whose career plan was to retire eventually and become a Unitarian Universalist minister. In 1996, an oncoming driver lost control of his truck and crashed into the trooper’s cruiser, killing Griffith instantly. Braestrup, a writer and suddenly single parent of four children, ages 8 to 14, channeled her shock and grief by pursuing her late husband’s goal. She enrolled at Bangor Theological Seminary, intent on serving as a chaplain to her late husband’s law enforcement comrades. Instead, after ordination she was assigned to the Maine Warden Service’s search-and-rescue missions. The post frequently takes her into the midst of danger and mystery, surrounded by the state’s natural splendor. The wardens are men and women from whom she learns about wildlife, hunting, fishing, and trapping. For 120 of its 125 years, the Maine Warden Service managed well without a chaplain; they don’t need her, she observes. “I don’t make the difference between finding and not finding a body, between order and chaos, life and death. They do.” But the wardens seem grateful that she is there. Her greatest contribution, she said, is to be with them, to listen when others need to talk. Beyond freeing the wardens to search rather than stay with a missing person’s family or friends, and unlike a social worker or other professional, she believes that as a minister, “My uniformed presence signifies a human and humane understanding on the part of the wardens and the wider community that the body in the woods or in the water is not just a practical problem, but a matter of tremendous spiritual significance for those most intimately involved. As a reverend, I can express our reverence.” Braestrup’s book is more than well-told stories of her journey from sorrow to scripture to service. There is plenty of drama, and humor, in her vivid accounts. She has an excellent ear for dialogue and can nail a description in just a few sentences to give readers a 3-D picture of the people in her life. Startlingly honest and never maudlin—she quips that folks can’t resist “The Tale of the Plucky Widow”—she overcame immense grief and achieved new happiness, including an openness to fall in love again. As in only the best memoirs, she finds common ground in joining herself with her subjects and her readers. Sometimes Braestrup exhibits uncommon inner strength. When her husband died, she chose to bathe and dress his body herself, preparing him for cremation so he would not be “processed” by strangers at the funeral home. Hers was an act of love. When her children, who she notes were raised by two Unitarian Universalists, were skeptical about what she studied at the seminary, their questions nailed some of her own doubts. They helped her find meaning in the teachings and relevance in modern life. One time an ice fisherman died when his snowmobile fell through a thin patch. Warden Service divers brought him to the surface, where Braestrup knelt beside the body to make the sign of the cross, as the man’s worried wife had taught her along with the Catholic prayers he would have wanted. She was mystified by the sense of communion she felt in those actions. When wardens found the body of a young woman viciously murdered by a sexual predator, Braestrup saw a miracle in “the cops with their soft hearts breaking.” As searchers pursued a lost child, she waited with the girl’s parents who told her they are atheists. That makes no difference, she replied. As a mother, and despite her own fears, to give them hope she told that them that children who get lost in the woods are smart; they find a snug place to hide safely and sleep. She wanted to be right. This time she was. There is no blueprint for widowhood, said Kate Braestrup, it changes everything. She became a chaplain because her husband couldn’t. A loving heart pointed her in the right direction.
——Janet Mendelsohn