Illustration by Caroline Magerl.
At this writing, the physical symbols of summer have been tucked into winter cocoons: rockers off the Porch, kayaks under the buildings, water pipes drained, and this year’s array of ultrasonic rodent repellers activated. We did badly in the latter department last winter: the wrong breaker was switched off and some dog food was left in the pantry. Spring revealed evidence of long-running rodent orgies. Sleeping accommodations included bunkrooms with en suite baths in the stove insulation, which required replacement of a nearly new appliance. As you read this, please send evil thoughts toward the rodents of Boothbay in hopes that they might throw themselves into the sea. I am envisioning a new device in our ongoing war against these unwanted off-season guests. If there are high-frequency aural repellents, could there not be an aural attractant, a sort of electronic Pied Piper? I envision a moving sidewalk, such as the type that connects airport terminals, with rodent lullabies playing in the brightly lit corridor, itself festooned with posters for midwinter rodent vacation spots. Of course, the end of the moving sidewalk would be the end of the pier, not baggage claim. Enough of my winter obsession with rodents; on to the important news of our state. 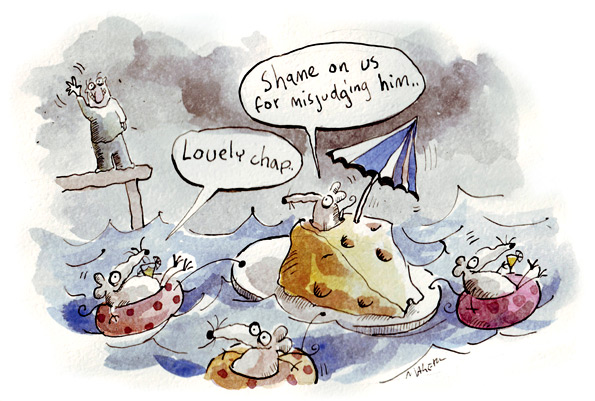 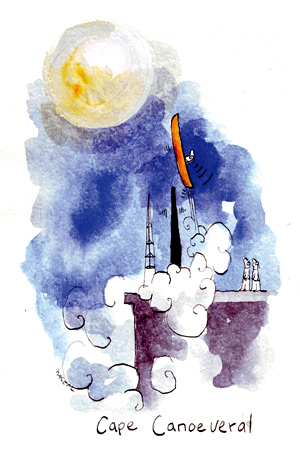 Illustration by Caroline Magerl.
Hamilton Marine’s Big Score Once upon a time, all you needed to build a boat, besides ability and a plan, was a pile of wood and the Wilcox-Crittenden catalog. W-C, a venerable institution, was at one time the country’s largest manufacturer of marine hardware. It continued as a subsidiary of Gulf+Western in recent years but has now ceased to exist, except in the form of its extensive remaining inventory. That has all been purchased by Hamilton Marine, a nationally known marine supplier founded in Searsport, Maine, by Wayne Hamilton. Hamilton is now offering many classic W-C products in its catalog, on line, and in its several stores. I am planning to get a supply of oarlocks to leave to my offspring; you should do the same. Go to hamiltonmarine.com. But Can You Throw a Canoe Off the Roof? It was nice to see that Wisconsin-based Johnson Outdoors, parent company of Old Town Canoe, decided to invest in an expanded plant in Old Town and consolidate their other plastic boat manufacturing in Maine, which includes a couple of kayak lines now manufactured in the northwest. The consolidation will add jobs to Old Town and ensure the long presence of this company in Maine. The Bangor Daily News covered the obligatory ribbon cutting with the Governor in mid-November. When the Gray family sold Old Town Canoe to the Johnson family in 1974, the company was experimenting with molded plastic boats, in addition to wood/canvas and fiberglass reinforced plastic (FRP). Up to that point the latter was the new material. Old Town was an early adopter of the plastic boat and a real pioneer in the industry. The closest thing to an indestructible canoe at the time was aluminum, but it was such a noisy ride that it seemed to be at odds with the charm of canoeing. Old Town’s new Royalex canoes combined maintenance-free durability without the disadvantages of aluminum. To convince a tradition-bound canoeing world that the new material was up to the task, an early advertisement showed employees throwing a canoe from the roof of the downtown factory. It worked. So, I am sending my brother over to eyeball the new plant to see if they incorporated a launch point on the roof to test new models and materials. Or maybe they will keep the old plant for the occasional canoe toss. No Man Is Without an Island Recently an old friend of mine realized a long-time dream and purchased a small island off the eastern Maine coast. It is a remote, treeless spot with a small cabin and views in all directions. Owning an island must be an odd and wondrous feeling. For those of us without the ability to do the same, a press release has fallen into my lap that promises the next best thing: a small floating island that you can tether to your inner tube; it comes complete with cup holders, a recess for a cooler, a snack tray, and an umbrella or plastic palm tree. I am referring of course to the soon- to-be-famous Bev Barge, from Weekend Products. It comes with two tubes with tethers that allow them to be attached to Bev Barge. (The Barge has anchor points for up to 8 tubes.) The recess accommodates a 36-quart Igloo cooler, which the release states will hold 48 cans. The way I figure it, the math works as follows: Assume 6 tethered revelers drinking 8 beers apiece. Each beer will take 20 minutes to drink, for a total of 160 minutes of drinking. Assume a drift of 1 mph. This results in a 2.7 mile radius or about 22 square miles of search area for the Coast Guard. Take Heart As you read this in the dark depths of winter, remember that the annual Maine Boatbuilder’s Show in Portland is but a few weeks away (March 19-21, 2010; www.portland company.com). I hope we all will have recovered some solvency by then, will have abandoned our states of temporary impecuniousness, and will become yachtsmen again, or at least people of the paddle. See you at the show. Also, I will be looking for you come spring, so keep those fenders and dock lines aboard if you frequent the waters that I patrol from the Porch. Feet up, binoculars at the ready.