Women and the art of tying flies 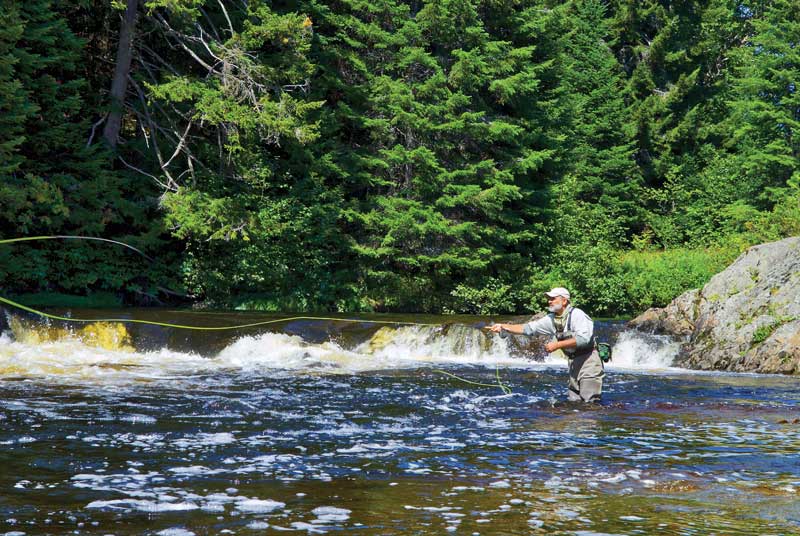 The author casting a Black Ghost tied by his friend and fly tyer, Peggy Brenner. Photo by Trisha Romano

In a sport dominated by men, it is interesting to note that the first English-language essay published about fly fishing is reputed to have been written by a woman. Whether truth or legend, most fly fishers acknowledge that in 1496, Juliana Berners, prioress of the nunnery of Sopwell wrote The Treatyse of Fysshynge wyth an Angle, a chapter in The Boke of Saint Albans. It is here that we first read descriptions of fly patterns. “The XII,” as they are described in the Treatyse, include among others, recipes for the Black Leaper, the Manure Fly, and the Drake, flies with bodies of different colored wool that even today would bring a brook trout to hand.

Four centuries later, across the pond in Manchester, Vermont, Mary Orvis Marbury took over commercial fly tying production at her father’s retail and mail order business. Described by author and steelhead angler, Lyla Foggia, as “mysterious” and a woman of “complex personality,” Marbury’s compilation Favorite Flies and Their Histories, published in 1893, provided the reader with directions for 428 flies. It included 157 photographs, representing patterns from all over North America. 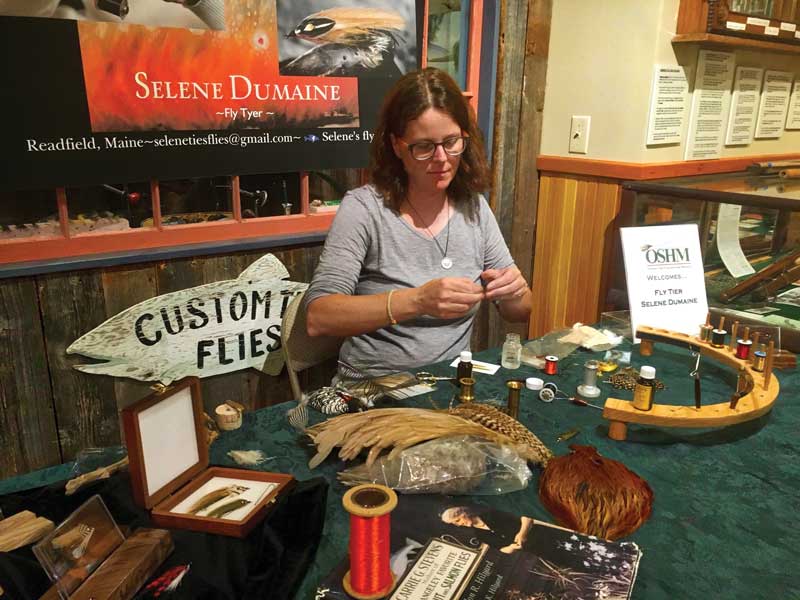 Selene Dumaine has mastered the art of tying streamers perfected by Carrie Stevens and she often does demonstrations, tying without the use of a vise. Photo courtesy Selene Dumaine

But of all the women who have wrapped feathers and fur around a hook and of those still to do so, Carrie Stevens will always hold a special place in the hearts of those of us who cast our flies in the tannin-stained ponds and across the sparkling lakes of western Maine. Find an angler tramping along the carry road beside one of the region’s boulder-strewn rivers or wading into a stream, and he (or she) will know the name of Carrie Stevens.

By 1920, Carrie’s husband, Wallace Stevens, had established himself as one of the preeminent guides of the Rangeley Lakes Region. His wife accompanied him to western Maine, where the couple spent the fishing season at Camp Midway, their cottage alongside Upper Dam. 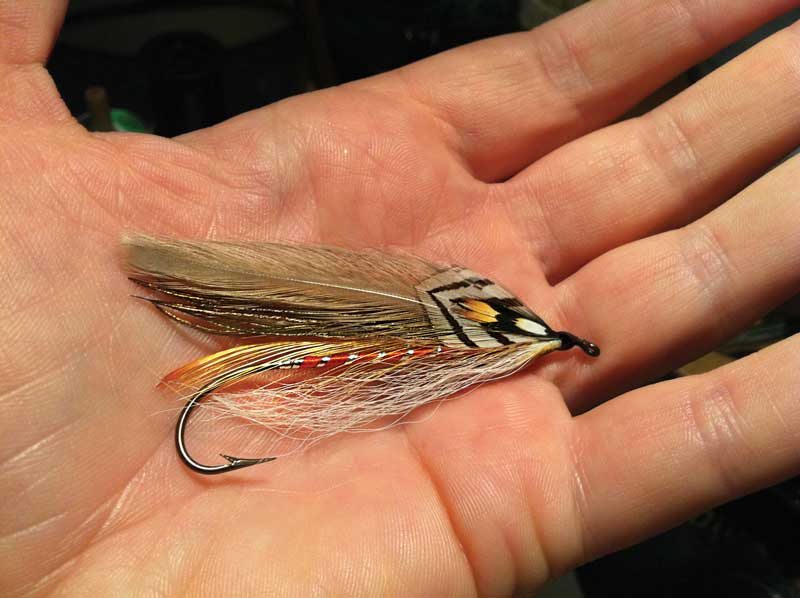 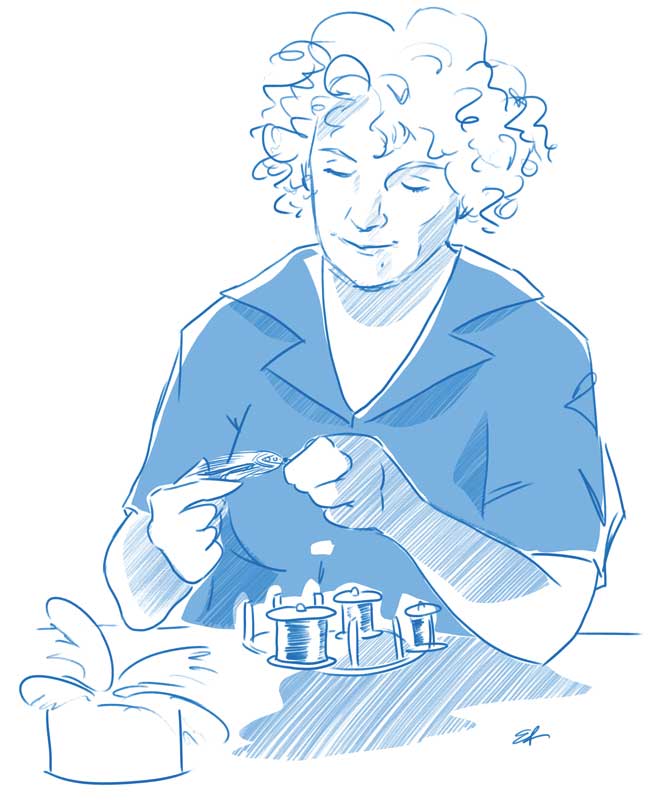 Carrie Stevens Urged by good friend, Charles Edward Wheeler, Carrie Stevens tied her first streamer, The Rangeley Favorite. Wheeler was an expert angler who tied his own flies and built bamboo rods. He was also famous for his wooden duck carvings. With Wheeler as her champion, Carrie tied flies, but continued to fish with live bait until a sun-streaked afternoon on the first day of July in 1924.

Acting on a hunch, as she would later write, Carrie abandoned her bait, casting instead a streamer of her own creation into the heavy current at the bottom of Upper Dam. As is often the case, after taking two fish, the water went quiet, but Carrie persevered, continuing to cast the streamer for another hour and a half. Then, at last, a brook trout rose through the froth to engage her in the type of battle that dreams are made of, or at least the dreams of an angler!

After netting the fish, she rushed into the nearby hotel, where the trout weighed in at a massive 6 pounds 13 ounces.

In August 1970, 12 days after her death, a plaque was erected in Carrie Stevens’s honor across the Carry Way from Camp Midway. The plaque identifies the streamer Carrie cast on that summer afternoon as her now-famous Gray Ghost, although in several interviews, Carrie stated it was a Rangeley Favorite that took the large fish. To further confuse matters, another of Carrie’s streamers was hooked in the trout’s jaw when the extraordinary fish was mounted.

Whatever pattern she used, it helped her win second prize in that year’s Field & Stream fishing contest. After the magazine published her story, she became an instant fly-fishing celebrity. By the 1940s, she was selling her patterns throughout the country.

Carrie was self-taught. She cemented each wing together before affixing it to the body of a streamer without the benefit of a vise. To better imitate the silhouette of a baitfish, Maine’s first lady of streamers broke with tradition by setting the shoulders of her patterns on the side of the hook rather than on top. She preferred heavier, long shanked hooks, with the tails of her patterns rarely extending much beyond the hook’s bend thereby reducing false strikes. Until she sold her business in 1953, the woman who has been described as being “as sweet as she looked” aspired to perfection. Perfection is what can be found in the many patterns she created while establishing the streamer as every Maine angler’s go-to fly to take brook trout and landlocked salmon. 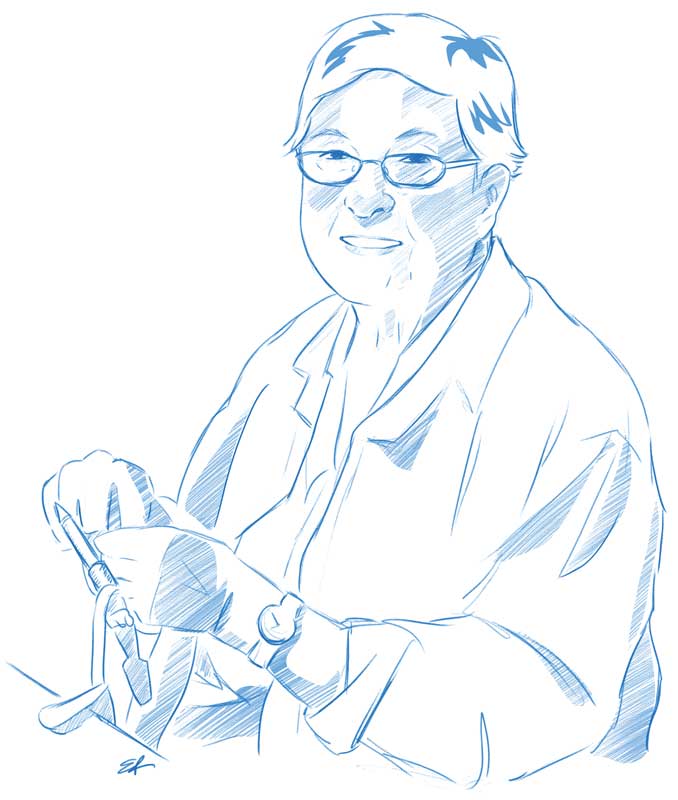 Glenna Allen Not as well-known as her predecessor, Glenna Allen was born a few years before Carrie and Wallace moved into their cottage beside Upper Dam. Allen learned to tie flies from her husband, Fred. The couple cast their flies throughout the Rangeley Lakes Region, especially in and about the Parmachenee tract, where they and their extended family have maintained a camp until this day.

Allen began with a three-drawer fly-tying box, but soon set up a fly tying bench in her kitchen. She eventually worked from a long plywood table in her living room until forced to add an addition to her home to keep up with the demand for her flies. At first, she tied for local stores like the Rangeley Region Sports Shop, where a limited amount of her streamers can still be purchased. By the 1960s, Allen was receiving orders from the Orvis Company, and soon extended her business to include L.L. Bean and Abercrombie and Fitch. While providing classes on fly tying, she recruited a dozen men and women to tie streamer patterns under her supervision.

Allen sold many patterns favored by anglers throughout New England while creating many of her own design. Two of her favorites were a little dry fly known as The Gotcha and a wet fly she called the Jolly Jared, named after her grandson, both reputed to possess magical qualities irresistible to brook trout.

At age 85, accompanied by her husband, Allen tramped down to one of their favorite pools and boated a five-pound brook trout, after which the couple set aside their fly rods and Allen retired from the fly tying business. Now age 89, Glenna is remembered fondly by anglers who continue to cast her streamers throughout the Rangeley Lakes Region. 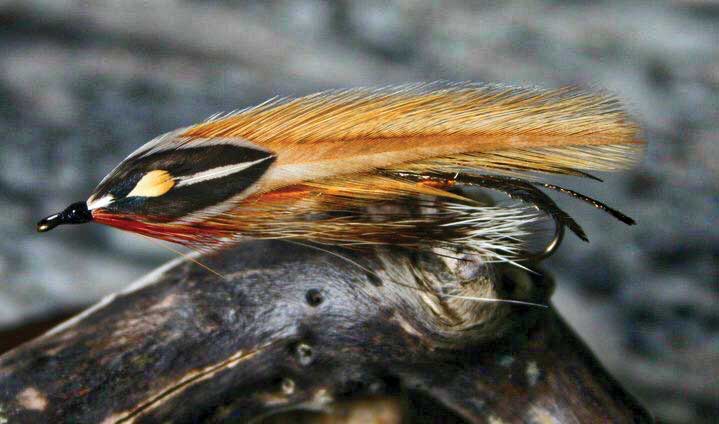 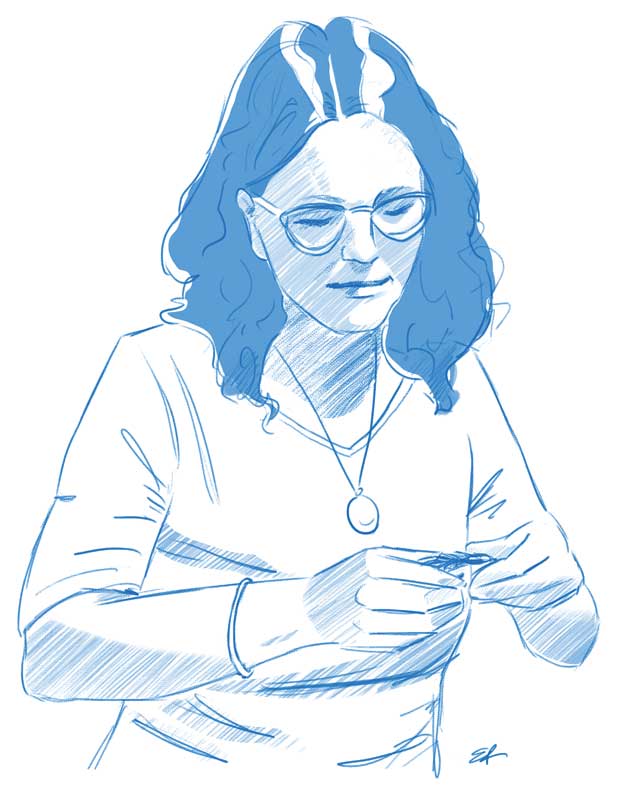 Selene Dumaine Born in the same year Carrie Stevens died, Selene Dumaine learned to tie flies using a Universal Vise Kit called The Professional that she received as a Christmas present. Four years later, she won first place in the Northeast Fly Tying Competition held in Wilmington, Massachusetts. Like Stephens and Allen, she became proficient with a fly rod, and at one time supplemented her income as a fly tier by guiding sports along the lakes and streams of western Maine.

Dumaine has originated many of her own patterns, the most recent of which is Don’s Legacy, tied in honor of the late Donald Palmer, the driving force behind the Rangeley Region Outdoor Sporting Heritage Museum. She has mastered the style of tying streamers perfected by Carrie Stevens, often providing demonstrations, tying without a vise as Carrie once did. At present, the majority of Dumaine’s flies are tied on commission to commemorate an occasion or some life-changing event. Those lucky enough to own one of her original streamers may someday find them as valuable as those tied by Carrie Stevens. 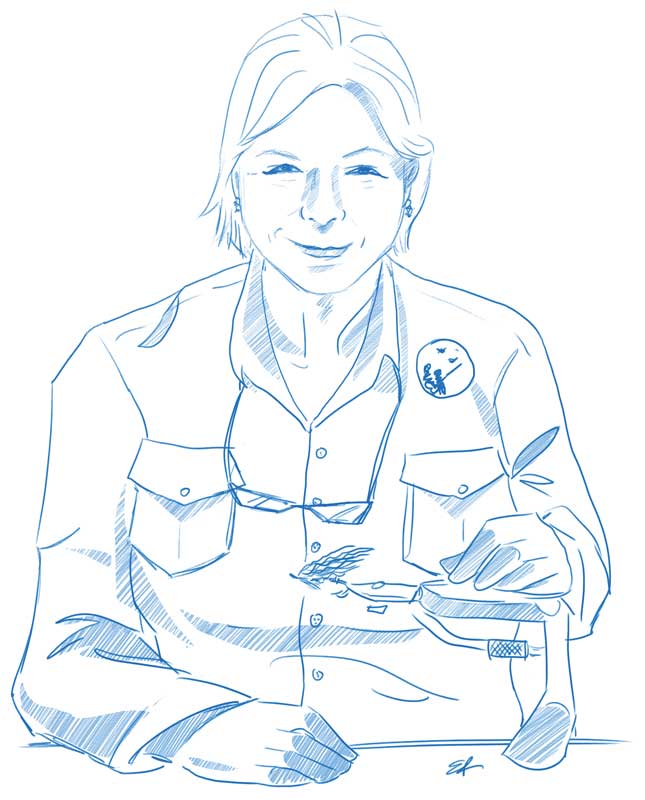 Peggy Brenner Another woman renowned for her streamers is Peggy Brenner. Peggy apprenticed under the watchful eye of Mike Martinek, Jr., a world-renowned tyer of classic Maine streamers, who in his early years was tutored by angling historian, Austin Hogan.

She is a past president of United Fly Tyers, the oldest tying club in the country, and current president of International Women’s Fly Fishing. Lately, she has concentrated her efforts on classic salmon flies, working under a grant sponsored by the New Hampshire Council for the Arts. She continues to tie special orders of Maine streamers for a small group of customers.

A few years back, I drove the short distance from my camp on Aziscohos Lake to the upper portion of the Magalloway River. It was late in the afternoon after a day-and-a-half of heavy rain. I entered the river as rain continued to spill down and cast a Black Ghost streamer created by Herb Welch in the 1920s and tied by Peggy Brenner, one of a dozen I had purchased from her. Although the original recipe for this traditional streamer calls for a white shoulder made of saddle hackle, she chose marabou, explaining that the undulating action of the feather would prove more effective. Two hours later I lost count of the number of landlocked salmon that came to my net.

Anyone who has cast a fly upon the water owes a debt of thanks to Dame Juliana, Mary Orvis, Carrie Stevens, Glenna Allen, Selene Dumaine, and Peggy Brenner, as well as all the women who have influenced our sport with their intellect and creative skill.

To learn more about women and the art of fly tying, visit the Rangeley Outdoor Sporting Heritage Museum in Oquossoc, Maine. www.rangeleyhistoricalsociety.org/outdoor-sporting-heritage-museum.html