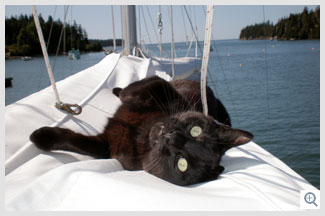 The Boatyard Dog this time is a cat!
Click on image to expand.
Yes, we know. It pains some of us, too, as it no doubt does all those noble beasts—the Labs, the goldens, the Chesapeakes, the spaniels, even that cute little Shih-Tzu with the twisted marline in her hair—who have graced this page over the years. But we had to do it after Tom Hanson of Orrington, Maine, who with his wife Ann sails their Pearson ketch out of Northeast Harbor, sent us the following: “My declaration of No More Cats was sabotaged when a tiny black fuzz-ball of a kitten attached himself to our back screen door. I blinked first with an offering of food. I blinked second after a little Internet research revealed that an all-black cat is considered good luck on a ship. The kitten, now cursed with the moniker of Darth (he is totally black after all), had to pass a test, however, before being accepted into our family: he had to prove his sea legs. He did that when, during his first encounter with mal de mer, he returned to his litter box to “call Ralph,” rather than make a mess of the deck. How could I refuse him after such a noble gesture? The deal was sealed. “Darth now regularly performs feats of derring-do: he leaps from boat to dinghy and back, or, perched with all four paws on a narrow dinghy gunwale, bounces across the waves without ever falling into our cold waters. We do have to keep a safe distance from other boats to prevent him from leaping aboard to explore. One time we didn’t, and an innocent boat had to be partially disassembled to retrieve the curious Darth.”

We’d like to see your Boatyard Dog® (OK, OK, or cat). Send a clear photo and pertinent details to BYD, P.O. Box 566, Rockland, ME 04841 or editor@maineboats.com. Also, it is now the time for you and your dog to enter the wild and crazy Eighth Annual World Championship Boatyard Dog Trials to be held on August 15, 2010.