By Rob McCall
“It’s spring fever. That is what the name of it is. And when you’ve got it, you want—oh, you don’t quite know what it is you want, but it fairly makes your heart ache, you want it so!”
—Mark Twain
Dear Friends: With the showers of April the grass begins to turn green, and the apple trees start to show green tip. With luck we won’t be seeing frost for months ahead. Last year at this time I was raking and hauling brush when I noticed a swarm of insects circling close to the ground. They were furry black with yellow and orange on their backs. They hovered over several small holes in the ground, each surrounded by tiny grains of clay like an anthill. I’d never seen anything like this before. They looked like bees with homes in the ground. I went back to my work resolving to do some research at the end of the day. 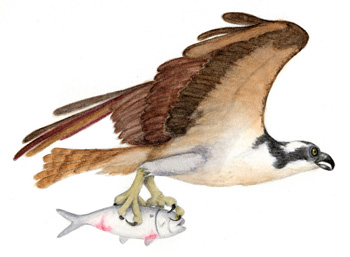 Illustration by Candace Hutchinson
Mountain Report, Early May The blueberry barrens are bronze under an empty blue sky as I hike up to the west shoulder of Awanadjo—Blue Hill, or “Small Misty Mountain” in the Algonkian language. White buds and a few tiny, bell-shaped flowers dot the low glossy bushes; bumblebees nuzzle and bumble around near the ground. A hermit thrush flutes from the woods nearby, while the sparkling bay stretches off to the islands and the open ocean. Suddenly a great dark shadow runs along the ground, and I raise my eyes to see a silent osprey soaring from east to west on still wings. Memory turns to ospreys diving at me as I paddled too near their huge, stick-built nest in Conary Cove, or perching silent and ghostly on gray snags at Red Cove on Cobscook Bay. Like their slightly larger cousins, the bald eagles, ospreys were once few in number, due to the ravages of DDT. Now they inhabit every continent but Antarctica, circling and chirping over the waters, then folding their wings and dropping like a stone into the waves to rise with quivering fish in their talons. Natural Events, Mid May One apple tree looks pretty much like another; for most people it’s hard to tell them apart. It was so for me, too, until I had a natural born-again experience in an orchard 37 years ago last month, the day a crow showed me the dance of life and death. After that day, apple trees became the cherubim and seraphim of my earthly pilgrimage, and I began to recognize each distinct breed of tree by its shape and size, its flowers, its fruit, its twigs and bark. So it is with the dozen or so elderly apple trees in our little orchard, which I have tended over the past quarter century. The Wolf River varietal is large and spreading, as are its apples, yellow and red and abundant every other year, but poor keepers. Its blossoms are touched with pink, and its twigs are smooth with large nodes. Its spirit is one of generosity and sweetness. The yellow transparent is small and twisted, having lost several limbs. Its flowers are pure white, and its apples are early and yellow and also poor keepers. Its spirit is shy, but cordial. The crab apple is thin and bent, with much tiny, bright-red fruit good for jellies. Its spirit is sour and grudging, but faithful. And so it goes with all the trees, each with its own distinctive arboreality, alike yet distinct. Also alike are apple trees’ seasonal cycles. In spring as they emerge from their winter sleep, they show first what is called “green tip,” then quarter- or half-inch green, as the buds emerge. Then they show “mouse’s ear,” when tiny leaves pull away to show tightly bunched flower buds. Then it’s “tight cluster,” “early pink,” “late pink,” “popcorn,” “bloom,” and at last “petal-fall.” Last year at this time my apple angels were at pink to bloom, a little ahead of most years, but not alarmingly so; when I walked through the orchard I could feel their excitement. I could almost hear the rushing of sap, the creaking of swelling bark, the bursting of buds into blossom like ten thousand tiny umbrellas opening. I could sense the subtle impulses moving among their mingling roots like synapses while they chattered soundlessly with each other about how exquisitely good it all felt, don’t the bees tickle, and wasn’t that last rain shower just utter bliss? After being nearly dead for months, these ancient oracles were as awake and alive as they had ever been, shouting silent songs of praise and thanksgiving to the sky, wanting nothing more from life than that very moment. Field and Forest Report, Late May

Illustration by Candace Hutchinson
The lupine, with its deep purple to lavender to blue to pink to ivory flowers, is in lush bloom along roadsides as it is each year from Asia to the Americas. The trademark Texas bluebonnet is a type of lupine; other types are enjoyed as a vegetable in Egypt and Lebanon. In Maine, the lupine generates distinctly mixed opinions. For some it is the quintessential symbol of spring: it welcomes rusticators back to their seasonal homes and spawns local lupine festivals up and down the coast. For others it is a noxious, invasive weed that threatens native plants, spurring eradication campaigns in Acadia National Park and other public lands. One man’s weed is another’s wildflower. Let’s look at both opinions. On the up side, the lupine shows strikingly elegant displays on its long flower stalks, spicing the air with its peppery aroma, feeding the bees with pollen, and delighting children of all ages with memories of Miss Rumphius. Being a legume, lupine improves the poor soils it prefers by fixing nitrogen in its deep roots. This tends to put the lupine out of business over time as other plants move in to take advantage of the improved fertility. Over the past 25 years I have watched abandoned blueberry fields go to lupine and then to grasses and other wildflowers in a natural progression. Many gardeners can testify to the difficulty of getting lupine started in an already healthy ecosystem. It prefers soil disturbed by such human activities as clearing, erosion, and construction. Further, the term “invasive species” ignores the fact that nearly all species now in Maine are non-indigenous, since the glaciers receded 10,000 years ago leaving only bare rock and till behind. Any list of so-called non-indigenous species in Maine must therefore include not just milfoil, Russian olive, purple loosestrife, and lupine, but also apples, lilacs, forsythia, dandelions, daisies, hawkweed or “Indian paintbrush,” corn, wheat, potatoes, tomatoes, broccoli, and just about everything in our gardens… not to forget dogs, cats, horses, and, of course, white people of European descent, some of whom are now trying to stomp out the lupine. In fact, it would be practically impossible to compile a list of species that did not come to Maine from somewhere else. We are all immigrants and sojourners. Now, to the down side of the lupine: Come to think of it, try as I may, I can find nothing about the lupine that justifies its destruction. Rank opinion Today’s invasive species will likely be tomorrow’s honored member of the living community. More Seedpods to Carry Around With You From E.J. Salisbury: “We can in fact only define a weed…in terms of the well-known definition of dirt—as matter out of place. What we call a weed is in fact merely a plant growing where we do not want it.” And from Ralph Waldo Emerson: “What is a weed? A plant whose virtues have not yet been discovered.” That’s the almanack for this time. But don’t take it from us—we’re no experts. Go out and see for yourself.
Yr. mst. hmble & obd’nt servant,
Rob McCall

Rob McCall is a journalist, naturalist, fiddler, and long-time pastor of the First Congregational Church of Blue Hill, Maine, UCC. Readers can contact him directly via e-mail: awanadjoalmanack@gmail.com or post a comment using the form below.