Illustration by Caroline Magerl.
I suspect for all of us there is a personal moment of transition, sometime in the spring, which we note each year, at least to ourselves. The moment this happens can range from March 1, which is the day I declare in my office that we have “broken the back of winter,” to June 1, when my wife receives an annual e-mail from a friend stating that “June is busting out all over.” The latter, you might remember, is a song from the musical “Carousel,” the only Maine-centered Broadway musical to seamlessly combine clambakes and marital discord. If you are reading this as soon your copy arrives, welcome to the promise of spring. Don’t pull the cover off the boat quite yet, however, as we have a lot of news to cover from the frozen months: Maine gets a big pile of money from the Feds to extend our slow speed rail service up to Brunswick, those same Feds turn off the Loran navigation system, and the oldest elm in New England finally succumbs to Dutch elm disease. So pull up a rocker but leave your coat on. Forward to the Past Maine got great news in January. The Federal government decided to send to Maine $35 million to bring state-of-the-art, 1950’s-era infrastructure to our passenger rail system, which to this point has been limited to a Portland-Boston run that goes neither to Logan Airport nor connects with any real trains, and gets to its destination a half hour later than a bus leaving at the same time. Plus the bus leaves more frequently and is about 40% less expensive than the train. In 2012 we can expect the same disadvantages all the way to Brunswick. And it is only costing $35 million to get going. Press releases regarding the new service to Brunswick indicate a 50-minute train trip for what takes 30 minutes in a car or bus. So why do our elected officials fall all over themselves supporting large expenditures for low-speed rail? It isn’t to provide speedy, affordable inter-city transportation; buses are faster and cheaper. We are confused. On the Porch we support fast, efficient, and comfortable public transportation. Our regular reader will recall our interest in New Urbanism: clustered housing and services that can make personal car use a rare need. Good public transportation is essential for this to work. But to change habits, the public option needs to be a better alternative: fast, convenient, and inexpensive. I have ridden the Shinkansen (Japanese bullet train). The Downeaster is not the Shinkansen, and doesn’t need to be, but for $35 million it should at least be as fast as a bus. 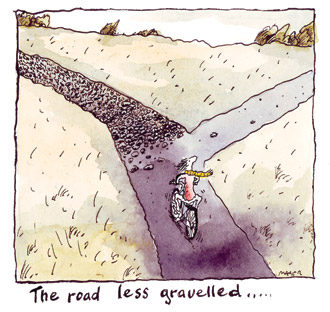 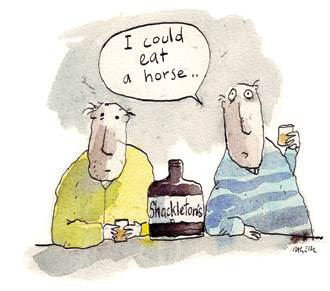 Illustration by Caroline Magerl.
I Taste a Liquor No Longer Brewed In a BBC news posting from early February, we learned that additional cases of liquor from the Ernest Shackleton expedition to the South Pole (1907-1909) have been unearthed, or more accurately, un-iced from his hut of 1908. The great excitement in the drinkers’ world is that a heretofore lost blend of whiskey may be replicated after analysis. Fortunately, the hut was in an area of Antarctica supervised by New Zealanders, so the alcoholic beverages were handled with the proper reverence. The whiskey was originally consigned to Shackleton’s expedition by the Glasgow firm of Whyte & Mackay, whose current master blender, Richard Paterson, hopes to get a crack at recreating the blend. See Mr. Paterson’s blog, themasterblender.com, to get in on the excitement. You might have to enter a search for “Shackleton” or “South Pole.” Also on the liquor front, to no one’s surprise, Allen’s Coffee Flavored Brandy easily outdistanced all competition as the most purchased spirit in Maine for the umpteenth year. Maybe in 100 years, someone will unearth a case of ACFB under a remote shack in Hancock County. In that event, however, the drinking world will not be all a-twitter, because the special blend, that is ACFB, will still be the #1 spirit in Maine. So let us close out winter with the taste of Shackleton’s whiskey on our mental tastebuds and with the expectation that the rockers will soon be lined up on the Porch again. Feet up, binoculars at the ready.