All illustrations by Ted Walsh
This issue of our magazine is my favorite. As I write this I am sitting in my brother’s living room in Portland watching golf being played in Dubai and appreciating the higher arc of the sun. In spite of the deep snow and icy sidewalks, there is a glimmer of hope that the roof rake may soon be taken apart and stored for another year. A string of storms in coastal Maine has left mountains of snow that are reminiscent of the Franklin County of my youth, although the mental images of a half-century ago have a few gaps. When I was a boy we lived on a hilltop that faced northwest. The cold northwest wind that inevitably followed a big snow dump would sweep in unhindered for miles from the mountaintops around Weld. My dad put up a slat snow fence on the west end of our front lawn so the blowing snow would drop before it got to the driveway itself. The net result was a huge drift that grew through the winter. My favorite snow-fort project was to hollow out that drift for a hideout and hope it didn’t collapse while I was playing Famous Arctic Explorer. There have been similar adventures aplenty for Maine’s kids this winter. But enough reminiscences. Let’s discuss what we have all spent the winter dreaming about: summer and boats. The cottage is a little cold and hard to get to through the snow, but thanks to the Internet the virtual porch has been in session, sort of a Porch in the Cloud. It’s Supah Here is a trend that almost seems like government doublespeak: the rate of decline in the production of new large yachts has declined, so says ShowBoats International, according to an article in the online trade version of Soundings. While we don’t often clutter our commentary here on the porch with lengthy quotations, preferring to be our own spin doctors, this one has too many clichés and metaphors to pass up: “‘Since we began collecting…information, the high-water mark occurred with the 2009 list, where 1,016 projects reflected the uptick in yacht buying that began in 2006 and lasted until exuberant excesses flung the economy off the cliff,’ the magazine’s acting editor Marilyn Mower said in a statement.”

Ms. Mower went on to note that the new yachts on order, while fewer in number than before, are larger in size than ever. Size evidently does matter; large-yacht ownership may be a chemical-free substitute for those little blue pills or the bathtubs we are supposed to carry around for post-coital bliss. Back to metaphors like “flung the economy off the cliff.” Can we ask our talking head types to please lose the expression, “thrown under the bus?” Let’s switch to something more nautical, such as “hung from the yardarm,” or “pumped into the holding tank.” At any rate, we guess that the declining rate of decline in the declining number of large yachts is a pretty good thing there, eh?

Superyachting in the Cloud From CNN.com we learn that the yacht Soulmates, available for charter from the Luxury Yacht Group, is the first such vessel to offer control of climate and entertainment to its guests via an iPad application. The shades go up and down and the music goes round and round at the touch of an icon. There are, of course, the more mundane accessories we all expect in a proper yacht: giant TVs, multiple hot tubs, and aromatherapy showers. Ah, yachting! P. Diddy reportedly had Soulmates tied up for a spell early this year, but there are probably a few slots open, at a mere $690,000 per week plus gratuity. So if you have to keep your annual week’s vacation under a million again this year, you probably still have enough money left over for chartering a jet to the Soulmates pick-up spot. In the interests of full disclosure, I should note that there is an iPad on our Dyer 29. It’s a cushion on top of the engine box on which I like to lie. Actually, Gail uses it more often than I do, so it is more of a herPad. Our aromatherapy choice is eau á la mold. Solo Sailing Slurs 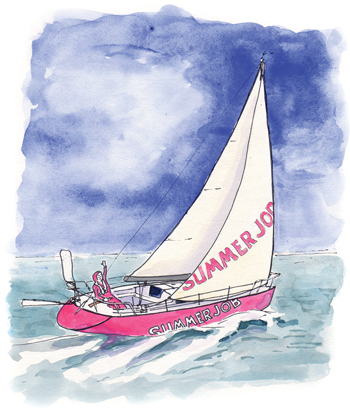 Much as we profess to admire the feats of long-distance solo sailors, on the porch we take a dim view of the basic violations of safety-at-sea watch-keeping practices that solo sailing requires. That increasing numbers of teenagers since Tania Aebi completed her solo circumnavigation have selected passagemaking as a rite of, well, passage challenges our concepts of good parenting. We encourage independent action and decision making, but to encourage a child to sleep when a watch should be kept hardly seems to be passing on good critical-thinking skills. American teen Abby Sunderland’s recent abandonment of her boat in her attempt to be the youngest circumnavigator, and the great expense undertaken by several nations to rescue her, is a case in point. For my favorite take on the subject, please refer to America’s Finest News Source, The Onion, which covered Sunderland’s quest in a story entitled, “Abby Sunderland—Concocted History’s Most Extreme Plan To Get Out Of A Summer Job.” It doesn’t touch on our watch-keeping debate above, but it does prove that there are lots of ways to have fun with the news. If you don’t know The Onion, it’s time you did (www.theonion.com). See you in the Cloud. Hinckley’s New Harbor One news item we recently followed carefully for a variety of reasons was the sale of the Hinckley Company, arguably the best known of Maine’s boatbuilders and one of the largest employers in Hancock County. The sale was widely covered in all the state’s press; we gleaned these details from the Ellsworth American. Hinckley has long been held by a variety of private equity firms, and the new owner, Scout Partners, is in the same category. The principals include David Howe, a sailor and longtime friend of Hinckley Company CEO James McManus, and Peter G. Petersen, a well-known philanthropist, former Commerce Secretary, and founder of the Blackstone Group, another private equity firm. The investment is thought to be good news for Hinckley, its employees, and customers. From the information available in the press, the new owners, in addition to having deep financial resources, are knowledgeable and have a passion for the brand and its prospects for the future. This recession has been particularly troublesome for the boat business. Shrinking portfolios at all levels have considerably dampened the appetite for new boats, from the canoe to the colossal. While there are those of us who put boat ownership in the “necessities of life” category, there are many misguided souls out there who cling to the notion that boats are a discretionary purchase. While there may not be a Hinckley in my future, there is always one in my imagination.

There are many misguided souls out there who cling to the notion that boats are a discretionary purchase.

Plures Naves News of even more investment in Maine boatbuilding was rife this winter. In the last issue we reported on David Marlow’s play to build his elegant voyaging motoryachts in Eastport at the Boat School site, which would include an expanded curriculum as well as facilities for new construction. In late January, the Bangor Daily News reported that negotiations are continuing with Eastport, which owns the Boat School property, and Husson College, which operates the school. The prestigious Westlawn Institute of Marine Technology, a distance-learning school that teaches yacht design, also announced in late January that it was moving to Eastport. Good news all around. Meanwhile, several of the best-known names in the business—Steve White of Brooklin Boat Yard, Taylor Allen of Rockport Marine, and J.B. Turner, formerly of Lyman-Morse—are part of a group that plans to build a state-of-the-art facility in Belfast on the waterfront site formerly slated to become a big condo development prior to the financial meltdown of 2008. Also involved is Ken Priest of Kenway Corp, the Augusta-based composite design and engineering company we have mentioned in previous columns, and several others; Mr. Turner will be the managing partner. A marina is planned for the project, but the big news is the inclusion of a large yacht-building facility. So you big-yacht customers, come on down (east). It’s easier to get to (I think) than the Far East and we speak English, kind of. Plures Homarus Americanus What is this column if not a shill for the lobster and its gatherers? Readers will perhaps remember in the fall issue our report on the changes to Maine’s “lobster mutilation” laws, which heretofore did not allow the sale of claws in the shell because of the difficulty in imputing the original size of the lobster. Like our trees that go to Canada to be sawn, our lobsters were sent across the border to be dismembered, only to reappear on our shelves as a processed Canadian product. Now Governor LePage’s choice for Commissioner of the Department of Marine Resources, Norman Olsen, aims to have more lobsters shed their final carapaces in-state and boost value-added processing. Most recently Mr. Olsen was a State Department official coordinating counter-terrorism activities, but he has a deep background in the fishing industry, including having lobstered his way through college. An article in the Ellsworth American has pointed out that initiating lobster-processing operations here is not as easy as it seems; food processing in today’s world requires lots of capital, lots of labor, and experienced management. You don’t get to sell your lobster meat to the European Union using Granny’s pickling technology. No cigarette ashes allowed in the jars. Homer J. Crew Seafarers are known yarn spinners, so this news should come as no surprise: yarn spinner (get it?) J. Crew’s designers spent some time in Portland recently to absorb the bold yet delicate hues of Winslow Homer’s paintings; the result will inspire the men’s spring collection. There is a promotional video on the company’s website that discusses the inspiration provided by Mr. Homer’s work: jcrew.com/mens_feature/presentation.jspif you are interested. Good marketing consists of good story-telling, something that J. Crew has done well for years; a good story that resonates with a consumer’s sense of self is often the only distinction among the offerings of different apparel brands. The exposure to a wider public of the Portland Museum of Art’s collection of Winslow Homer’s work can only be a boost to Portland and the museum, although thinking of Homer in the fashion world seems something of a non-sequitur. Oh, but wait, we are hip here on the porch! Why, just last summer we visited that trendy Euro-boutique in downtown Damariscotta, a.k.a. Reny’s. As a result you’ll be able to pick out our sage mentor Capt. Pete as he boulevardiers down Townsend Avenue in Boothbay Harbor this coming season. 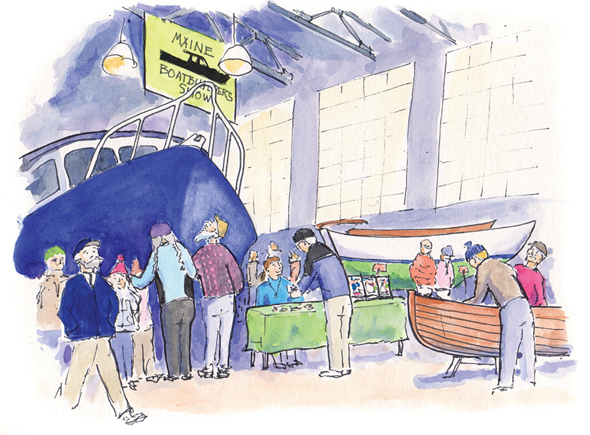 In Closing This issue’s column would be incomplete without a call to arms for the upcoming season: The Boatbuilders Show is under way The equinox a month away Rouse you up from winter’s sleep And brown liquor no longer keep. Clear liquor is the thing To usher in the coming spring To the rockers with hands steady Feet up, binoculars at the ready.