However defined, this is a stellar dining establishment.

As one would expect, Mâche’s menu is built around local and organic ingredients. all photographs by Anna Sawin, courtesy Mâche Bistro
“Bistro” is a term that is applied very loosely these days, almost to the point of abuse. Any place can call itself a bistro—even if it’s a far cry from the little neighborhood joints that enterprising Parisians began opening in their basement kitchens more than a century ago to serve classic home cooking, such as boeuf bourguignon and coq au vin. 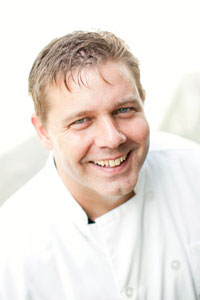 Chef Kyle Yarborough.
Sticking too tightly to tradition can get boring, however, and this is the twenty-first century. Which brings me to Mâche Bistro in Bar Harbor, where chef Kyle Yarborough strikes a brilliant balance between tradition and innovation. Tom and I felt as if we had entered another world the minute we ducked into Mâche’s simple, low-lit interior from the tourist-clogged sidewalks of Cottage Street. Calm and uncluttered, decorated in shades of taupe, black, and cream, the intimate dining room was a soothing contrast to the busy street outside. The wood tables were bare, set with simple flatware and napkins, and adorned only with white LED votives. Minimalist décor aside, we could see from the menu that this would be an intriguing world—French-inspired, but with Spanish, Mediterranean, and Latin accents, plus a trace of Yarborough’s native South Carolina for good measure. “I prepare traditional French dishes,” Yarborough said, “but put my own favorite flavors, twists, and tastes from different places into them. For instance, my duck confit is infused with ancho chilis to give it a rich, earthy flavor without the heat.”
French-inspired, but with Spanish, Mediterranean, and Latin accents, plus a trace of South Carolina for good measure.
That confit turned up in a number of dishes, including an appetizer of rillettes. Yarborough’s version of this paté-like spread combined the confit with smoked duck breast and chicken livers, and was served with grilled bread, cornichons, and grained mustard. 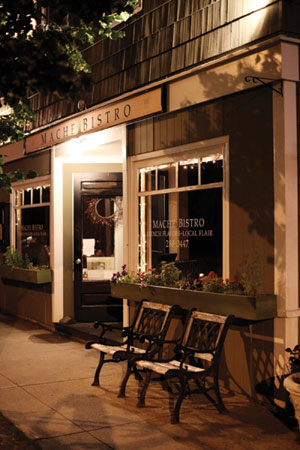 While the rillettes sounded tempting, I craved something a bit lighter and opted instead to begin with the roasted piquillo peppers stuffed with Maine peeky-toe crabmeat and goat cheese. These red “little beak” peppers from northern Spain, traditionally roasted over an open fire, were the perfect foils for the creamy filling. They made for a beautiful presentation, surrounded by baby arugula, saffron aioli, and tiny triangles of grilled bread, and graced with a single blue cornflower. Crabmeat also starred in Yarborough’s South Carolina she-crab soup and in a refreshing and summery salad. Tom ordered the latter, which was dense with crab combined with avocado, crisp cucumber, and a tangy lime and cilantro dressing. Mâche’s menu is built around whichever local and organic ingredients Yarborough can get his hands on, which keeps things exciting. The seven selections the evening we visited included Basque-style chicken, a hanger steak, and bouillabaisse, the classic Provencal seafood stew with haddock, scallops, shrimp, and calamari cooked in a saffron, fennel, and tomato broth.
From start to finish, every course at Mâche was beautiful on the plate and on the palate; deceptively simple presentations belied complex flavors.
Tom chose the chicken, which came from Mandala Farm in Gouldsboro. The presentation was at once rustic and beautiful: a chicken leg braised with tomatoes, olives, and slivers of spicy-smoky-sweet chorizo sausage and plump shrimp atop creamy polenta. Tom shared a forkful, and I found it to be the most luscious chicken dish I’ve had in a long time. The chicken was so tender that Tom, a white-meat guy, didn’t even realize that he was eating dark meat. 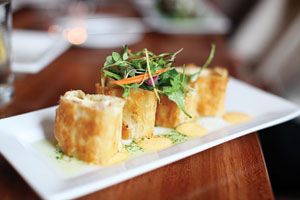 The menu changes often, sometimes right up until meal time.
Spanish flavors inspired the pumpkin-seed-dusted Arctic char, which turned out to be as irresistible as it sounded. The fish was moist and coated with Spanish pumpkin seeds and Yarborough’s own spice rub, a combination of ground ancho chilis, cumin, and other seasonings. Topped with fennel and onion confit and drizzled with lemon caper oil, the dish was at once subtly sweet, savory, and bright with warm, earthy undertones of spice. When I later asked Yarborough how he achieved the simultaneously mellow and piquant flavors in the confit, he revealed his secret. “The fennel and onion are slow-cooked like a traditional confit,” he said, “but with olive oil, not duck fat. The other difference is that I use Meyer lemon olive oil and white Meyer lemon balsamic vinegar from Fiore Olive Oils in Bar Harbor.” Yarborough used the same olive oil to brilliant effect to make lemon pound cake, the “pain” in his pain perdu, or “lost bread.” Soaked in sweet cream, studded with fresh and dried Maine blueberries, and topped with blueberry and buttermilk ice cream, it reminded me of a decadent bread pudding. 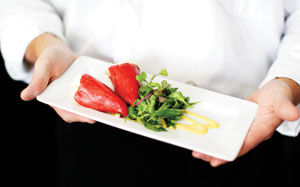 Deceptively simple presentations bely the complex flavors within.
From start to finish, every course at Mâche was beautiful on the plate and on the palate; deceptively simple presentations belied complex flavors. No wonder it has drawn a loyal following ever since Yarborough and his wife Marie bought the restaurant in 2009 and immediately set about reinventing it. Yarborough’s passion for food began during a summer stint at a seafood bar on Myrtle Beach, South Carolina, and prompted him to sign up for the Johnson & Wales summer course in classic French cooking in Charleston. “I didn’t finish it,” he said. “I didn’t like it because it was too restrictive.” It takes a master to bend the rules, which Yarborough does with exuberance and creativity. Tom and I have an anniversary coming up soon, and we plan to celebrate it at Mâche. We can’t wait to see what Yarborough cooks up next.