By Rob McCall
The first fall of snow is not only an event, it is a magical event. You go to bed in one kind of a world and wake up in another quite different, and if this is not enchantment, then where is enchantment to be found? —J.B. Priestley, 1894-1984 Dear Friends: With the arrival of November, frost steals in after dark, silently freezing the birdbath, speckling the green grass with sparkling white, pushing up crystal tusks from the wet ground, and putting a crunch in every step. Then, around mid-morning as the weak sun ever so slowly rises above the tree tops a cool mist curls up from fence rail and shed roof, the faint sound of dripping water is heard, the grass turns green again and the ground becomes soft and yielding underfoot. Freeze, thaw, freeze, thaw, freeze, thaw: this is the ancient and powerful hydraulic hammering that splits old boulders and older mountains ever smaller and smaller through ages upon ages until they can be picked up by any man with a good pair of hands and a strong back, then set on top of that old stone wall again, only to be thrown down by the frost once more as soon as he turns and walks away. Mountain report, late November As I was heading up the trail on a mild morning, it seemed that the mountain suddenly began talking to me. A sudden rush of words came pouring into my head, full of new ideas and new perspectives on things. It was like listening to someone far wiser than myself gently but firmly teaching me what I needed to know. At the risk of making you think your commentator has really gone around the bend this time, I will say that this has happened to me before. Maybe it has happened to you, too. This time, the mountain was expounding on the theory of evolution whereby the organisms which survive and thrive are those that best adapt to their environment. “But what is the environment?” said the mountain. “It is not a thing. It is every thing above and below, near and far, active and inactive, living and non-living, seen and unseen. It is made up of all weather, every stone, every grain of sand, every cloud or drop of water, every living thing. Any change in one calls for change in all. The scene is not of a bloody battle for survival with only a few winners, so much as it is an age-old worldwide creature chorus swelling in song with every member constantly tuning its pitch and shading its volume to every other, to create the most pleasing and beneficent harmony, embracing and enhancing all, ever richer, ever more beautiful. Some voices sing high so others sing low, some are silenced while others are added; some rise while others fall, some sing the descant while some hum the bass, some die so that others can live. It is the music of the spheres, and the Director is also the Composer who hears from within and swoons with delight.” So the mountain seemed to say that day. Mountain report, December A frosty climb up the Osgood trail under a smoke-gray sky spitting snow showed that the cold is slowly getting a grip on the mountain. The ground is frozen solid in most places and thumps like a drum when struck with a walking stick. The small brooks are still trickling, but the pools are varnished with ice and sharp frost crystals push up along the banks. The trails, too, are now icy in some places. Near the summit I thought I heard the sound of children’s happy voices coming through the woods to the north and wondered what youngsters could be doing on the chilly heights so early. At the peak I scanned the dark woods to see who might be chattering so gaily. To my surprise and delight, it was a flock of ravens surfing the north wind above the tree-tops, diving, darting, rolling, playing tag, and all the while gurgling and cooing at each other in wild musical abandon. It’s been a long time since I’ve seen such a rousing raven show on Awanadjo, and I came down feeling amply rewarded for my climbing efforts. 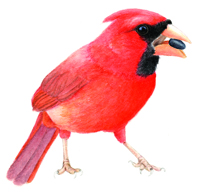 Illustrations by Candice Hutchison
Field and forest report, January If you ever get to feeling like a lonely human in the world, it’s understandable. There are other creatures all around us but they don’t speak the same language we do. We have made a big deal of being the only animal that uses language, or tools, or numbers greater than three, but that leaves every other animal and plant out of our circle of friends. So, it’s no wonder they don’t want to talk to us. We believed the hype about humans being superior to or different from all other living things as an excuse to ease our consciences when we cut down forests and decimated animals. So now we are like strangers in a foreign land, unable to talk to the natives, and it can be lonely. No, the other creatures don’t speak our language, but they communicate through sound and rhythm and motion, song and dance and ritual, and we can understand if we want to. “Those who speak do not know, and those who know do not speak,” reads the Tao Teh Ching. Think of this: we may not speak the same language, but we dance to the same divine music, change with the same seasons, walk the same earth, and live and die beneath the same heaven. And we’ve all been ritually getting ready for winter together, watching the lowering of the sun and the shortening of the days together, paying homage to the autumn together, worshiping the One Who Turns the Seasons together. We are all in this together, all blood kin, all one faith, never alone. Natural Events, January One of the beauties of soft snow is reading the signatures creatures leave behind in their daily travels. In my short walk to the church and back I see deer tracks going and coming from the orchard. I see bird tracks every which way. I also see trails of unknown, tiny, wild mammals. Pine mice? Meadow mice? Shrews? Voles? Some tracks show only the mark of a little round body plopping into the snow with the thin line of a naked tail behind, like so: -o -o -o -o. Others show the small front feet followed by the longer back feet, like this: <: class="floatimgRight"> 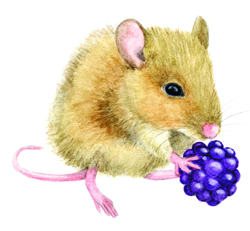 Illustrations by Candice Hutchison
“A mouse is miracle enough,” wrote Whitman, “to stagger sextillions of infidels.”
Due to their tiny body mass, these mini-mammals need mega-food to survive in the bitter cold; and we may see desperation in their meandering trails punctuating the pallid page of winter. What food do they find to eat during these dreadful days? Meanwhile, we gladly return to a warm house and a hot meal remembering our tiny, struggling, but stronger cousins. “A mouse is miracle enough,” wrote Whitman, “to stagger sextillions of infidels.” Question to ponder Is it the warmth that causes all this running around, or is it the running around that causes all this warmth? Rank opinion II The National Oceanographic and Atmospheric Administration declared 2012 to be the warmest year on record. Putting aside the hubristic folly of NOAA’s title it would take the density of granite for anyone to doubt the reality of global warming by this time. Even though hard statistics only go back a century and a half, core samples from deep Arctic ice and old trees show that Earth’s climate today is warmer than it has been in a very long time, and getting warmer. True, a warming climate can sometimes be a good thing. A warming period in Europe during the eleventh and twelfth centuries led to increased production of grain which led to larger and healthier populations and stronger economies which led to the building of magnificent cathedrals, which were the technological equivalent of our putting a man on the moon, only far more elegant, reverent, and awe-inspiring: the end of the Dark Ages. These marvels of human engineering still astound us and call us to better things. 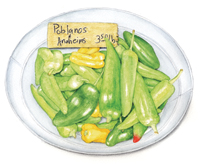 Illustrations by Candice Hutchison
Wild speculation Suppose we were to use the present warming to accomplish things equally beautiful and awe-inspiring. What might they be? A great cathedral was a true castle in the air and served as the spiritual and material heart of the surrounding region, calling artists, musicians, merchants, craftsmen, and farmers into its sheltering shadow to do what each did best. Goods and food were sold, music and drama were performed, and thanks were given to the Creator of it all. Many of our towns and cities traditionally played a similar role.
We need to be bringing it all back home; producing food and goods where they are needed.
Missing from the picture today are enough good local food and good local jobs, with the result that moving people and goods from where they are to where they are needed has become the root of so many modern evils, including global warming. We need to be bringing it all back home; producing food and goods where they are needed, and thus bidding farewell to poor food, joblessness, and the toxic reek of burning hydrocarbons while creating zones of beauty and elegance like the cathedrals of old. Castles in the air? Maybe so, but hey, it is January. Seed pods to carry around with you From the late American humorist Phyllis Diller: “My cooking is so bad my kids thought Thanksgiving was to com- memorate Pearl Harbor.” From Wm. Butler Yeats, for Ray Shea: “Come Fairies, take me out of this dull world, for I would ride with you upon the wind and dance upon the mountains like a flame!” From Thoreau’s journal, winter 1856: “The thin snow now driving from the north lodges on my coat. How full of the creative genius is the air in which these flakes are generated. I could hardly more admire if real stars fell and lodged on my coat.” And from Ben Franklin: “A good con- science is a continual Christmas.” That’s the almanack for this time. But don’t take it from us—we’re no experts. Go out and see for yourself.
Yr. mst. hmble & obd’nt servant,
Rob McCall

Rob McCall is the minister of the First Congregational Church, Blue Hill, Maine. This almanack is excerpted from his weekly radio show, which can be heard on WERU FM (89.9 in Blue Hill, 99.9 in Bangor) and streamed live via www.weru.org. Readers can contact him directly via e-mail: awanadjoalmanack@gmail.com or post a comment using the form below.

An Odd Fellows Hall is Reborn