The limelight only shines on those it can find 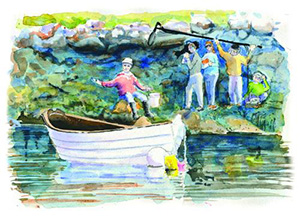 Illustration by Ted Walsh
By Eva Murray At the ferry terminal in Rockland recently, as I was getting ready to put a truck aboard the Everett Libby bound for Matinicus, I noticed some strange vehicles in line. The two dark-windowed, black Cadillac SUVs looked so out of place in front of the big flatbed from Viking Lumber, the usual overloaded pickups, and the rented U-Haul Matinicus uses for a garbage truck, that I initially wondered if someone with an official title like Secretary of War or Director of the President's Select Subcommittee on Externals could be in line for the Matinicus boat. Instead, as I write this, a roving gang of filmmakers is running around Matinicus, producing some sort of "reality TV" program about us rabid, lobster-catching pirates out here on this wild and woolly island. They've talked a few fishermen into participating, and there are rumors of significant remuneration, although the fear of being set up to look like some sort of salt-spattered Honey Boo Boo is eliciting a degree of skepticism. A lot of us are more or less lurking in the bushes in an effort to duck these fellows and their cameras. Because the television folks drive around in those large, shiny SUVs with Virginia license plates, the code word for them is "Dick Cheney"-as in, "I saw Dick Cheney parked at Mark's place a few minutes ago," to which the response might be, "Thanks, I'll go the other way." Somebody said they'd seen Cookie James being interviewed down on the rocks beside the wharf. The TV guys had hauled their studio lighting, little umbrellas, dust-mop boom microphones, and cameras out there on the ledges as ol' Cook, who is a native islander and one hell of a talented storyteller, sat among the barnacles and held forth on the ways of lobstermen. While I wish I'd been there to eavesdrop, I do not think they would have allowed it. They're trying to keep this all very hush-hush. Right. The filmmakers have made people sign agreements promising to keep quiet and respect the sanctity of this work of art. Not much chance of that here. They are asking lobstermen-guys who brag that they won't be given orders by the Marine Safety Patrol, the Department of Protecting the Environment, or their own mothers-to comply with production company boilerplate, including confidentiality and non-competition clauses and various other rules and directives. Think about it. The television guys came out here because our fishermen are supposedly outlaws. Then they handed these allegedly scary, knife-in-the-teeth types forms to sign affirming that they'll be submissive and cooperative and take these citified filmmakers, in their tight hipster jeans and overpriced haircuts seriously. You can't make this stuff up. I've always figured that if some fool wants to trek out here to Matinicus, and get pneumonia and hypothermia and all kinds of seasick on the ferry, or spend four days waiting for the fog to clear so they can fly out, and then writes about me or this community or any significant portion of us, that I get to write about them in return. This is our form of resistance-the defiance of the remote tribesman to the ethnocentricity of anthropologists. This is our non-violent protest, our civil disobedience. It is our just revenge against blatant stereotyping and a tedious overuse of the "pirate" meme. Writers, reporters, and filmmakers can contrive and invent all sorts of mush about Hearty Souls and Rugged Islanders, but they cannot make us take them seriously. That, and if I hear the expression "hearty souls" one more time I will surely throw up. For the moment, we're just having fun dealing with the nice television people. The passenger boat captain tried at length to explain the concept of a tide calendar to their logistics specialist. The EMT made it clear that if they filmed anybody's illness or injury, there might be another small injury added to the day's run report, namely a kick in the pants. When the electrician who runs the island power station stopped into the Post Office, the postmaster's first words were, "Have you been on television yet?" Considering his escape options, said electrician thought about the three Detroit Diesel engines in the generating plant, a noisy, crowded little building plastered with "Danger-High Voltage" signs and symbols of people being knocked on their backsides by terrifying bolts of jagged lightning. Perhaps the powerhouse would provide a safe refuge from the film crew. "I," the electrician declared, "expect to be deep in the heart of Detroit." Eva Murray lives year-round on Matinicus Island. Her latest book, Island Schoolhouse: One Room for All (Tilbury House), was published in September 2012.