By Peter Bass
Codforsaken gulf, kelp beer, and an eye on the tides and wind As I write this in early September, it’s fair season, and there’s a full month of these wonderful annual expositions ahead. I hope you managed a visit to one or two. I have a particular affection for the Farmington Fair in mid-September, an event so epic and important in Franklin County that we used to get a day off from school to attend. In the 1950s, announcements would pop up in store windows and on telephone poles. Now fairs have web sites as well. This fall was the 174th Farmington Fair, organized by the Franklin County Agricultural Society. For the town kids, this was often our closest look at livestock, although in a small town surrounded by family farms, it was a rare kid in Wilton who hadn’t spent time with a classmate on a nearby farm. My uncle operated a dairy farm not far from Wilton, and we often spent time with our cousins there, so the smell of manure around the fair was not unfamiliar. There were rides, a midway with shooting galleries and games of chance, and horse racing, which as a kid I didn’t find particularly compelling. My favorite tent was the one where the local car dealers would show off the next year’s models and the area where you could climb around on the tractors. Kelp! Kelp! I’m drinking Marshall Wharf Brewing Company of Belfast is a small brewery that is not afraid to try new ingredients, such as oysters and hot peppers. When word got out that they were brewing a Scotch Ale with some Maine sugar kelp added, the news went viral, attracting among others, National Public Radio, from which I gleaned the details. 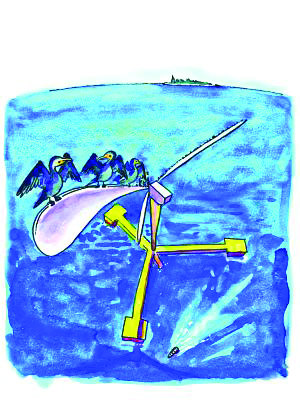 Illustration by Ted Walsh
In one last plug for the University of Maine and its various technology centers, early September marked the first anniversary of the scaled wind turbine project developed by the University’s Advanced Structures and Composites Center. This project demonstrated the feasibility of a floating turbine attached directly to the power grid. The center’s chief, Habib Dagher, called the year-long test a complete success and will now turn his attention to a full-scale version with 450' blades. Maine Maritime Academy provided a vessel to ferry an assemblage of politicians, U.S. Department of Energy, and university representatives to the test site to applaud the project and garner some press for it, which you may remember from a previous column was partially funded at the junior varsity level by the DOE. The pace and success of this project might move it up the roster. Let’s hope so. My only question is how many cormorants can perch on it when the blades aren’t moving? There is nothing like fall for a hike in Maine, whether up Morse Mountain in Phippsburg, the peaks of Acadia, or the mountains of Franklin County. It’s a great time of year. Time to put the chairs away And last Summer’s libations. Those of you with yachts afloat May proceed with your migrations. As you read I’m setting up My perch in Crawford Bay. Monitoring your anchoring skills As you stop along your way. We’ll be watching for all boats With downeast ports of hail, With binoculars at the ready And feet upon the rail.

Illustrations by Ted Walsh Contributing Editor Peter Bass hopes some sailing snowbirds will drop off a case of Sea Belt on their way south this fall. To submit your comments... newsy tidbits, photos, illustrations, clippings, rants, and raves for possible use in this column, use the form below. Or mail to “View From the Porch,” P.O. Box 566, Rockland, ME 04841 or fax to 207-593-0026. Items may be edited for length and clarity; materials become the property of Maine Boats, Homes & Harbors, Inc.