A selection of books about food, houses, and a maritime designer.

No Ordinary Being, W. Starling Burgess, Inventor, Naval Architect, Poet, Aviation Pioneer and Master of American Design by Llewellyn Howland II; published by David R. Godine in association with New Bedford Whaling Museum and Mystic Seaport Museum; 2014; $65. We’ve been waiting a long time for Howland’s definitive look at one of the 20th century’s most intriguing designers. It’s beautifully written and illustrated and a must read for anyone who loves history. 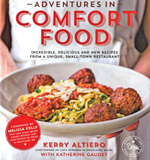 Adventures in Comfort Food, Incredible, Delicious and New Recipes from a Unique, Small-Town Restaurant by Kerry Altiero; Page Street Publishing; 2014; $21.99. Chef and owner of Café Miranda in Rockland, Maine, Altiero specializes in creative, locally-sourced dishes. For years I have tried to figure out how to make his Steak Croce (shredded steak and greens) for my husband. Finally, here are the directions, along with dozens of other favorites, such as new age chowder, lobster mac ’n cheese, and fish tacos.

The Hand of the Small Town Builder, Vernacular Architecture in New England 1870-1935 by W. Tad Pfeffer; published by David R. Godine; 2014; $40. Pfeffer writes about a less explored side of architecture: intimate oceanfront houses and lakeside camps and, most interestingly, their builders, many of them obscure. His chapters focus on specific communities, including some in Maine: the Belgrade Lakes, East Boothbay and Ocean Point, Squirrel Island, and Southwest Harbor. His photographs are hauntingly lovely.

Homes Down East, Classic Maine Coastal Cottages by Earle G. Shuttleworth Jr., Christopher Glass and Scott Hanson; published by Tilbury House Publishers; 2014; $39.95. The book visits 52 houses along the Maine coast that were featured at the time of their construction in the pages of Scientific American Building Monthly in the late 1880s and early 1900. It is an interesting way to explore architecture then and now.