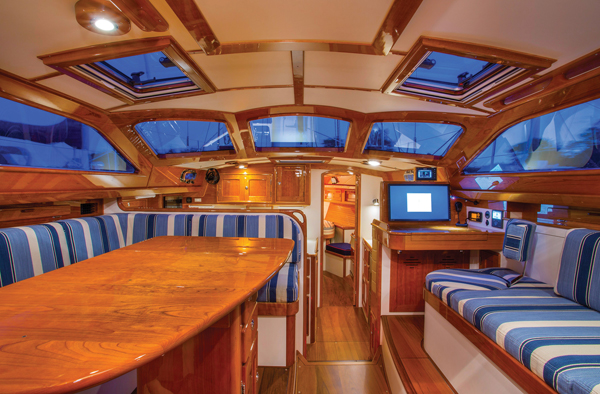 Photos courtesy Morris Yachts. The new Ocean Series GT won SAIL Magazine’s 2014 “Best Boat Innovation/Systems Award.” Its newly designed electrical system features lithium batteries, and an extremely efficient electrical system. The redesigned interior has a raised salon.
By Art Paine So maybe you own a Morris 48 and you’re wondering why you should even look at the new Ocean Series 48 GT. I’ve sailed a couple of thousand sea miles on one of the original 48s and can attest that it’s an amazing boat. Yet there are lots of reasons to look at the new model, including that it’s lighter, faster, and well appointed. In addition, Morris Yachts has taken note of many small features that customers appreciate and worked them into this distinctive Chuck Paine design. 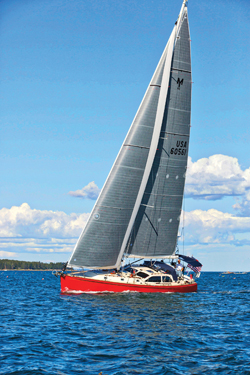 Overseas, at boat shows and in the Med, yachts are docked stern-to, with entry via either a stern platform or a gangplank called a passerelle. The new Ocean Series 48 GT (the initials stand for Grand Touring) accommodates that with changes to the transom and stern rails. An added benefit is that passage to and from the transom is unencumbered, which makes swimming, accessing the dinghy, or hauling aboard an unlucky fish easier. Morris is building these boats using resin-infusion technology and a different mix of high-modulus woven fibers from that which was used in the original Morris 48. Taken together, these and other engineering factors result in a somewhat lighter (by about 800 pounds) hull. This allows an owner to add more systems and features without paying too much of a weight penalty in terms of lessened performance. I know from my time as a systems installer at Morris that many of the company’s customers opt for a generator, bow-thruster, air conditioning, sometimes a washer-dryer, and other systems. I can assure you that particularly for boats that migrate from Maine to the tropics, every one of these assets becomes so welcome as to deserve a more positive term than “conveniences.” Several big changes involve the accommodations, including a larger crossbeam galley with work stations on both sides of the boat, a forward island berth, and a round shower stall in the forward head. This snazzy interior plan was the result of moving the mast farther forward. The purpose of that was to allow a self-tacking “blade” jib rather than a genoa, which makes sail-handling on the GT so much easier (in-boom mainsail furling is also available). Also, the mast is six feet higher, which increases drive, and thus speed. 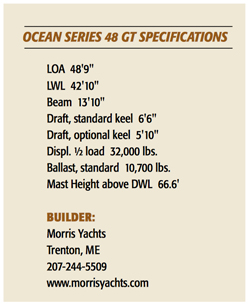 The 48 that I occasionally help deliver spends a lot of time somewhere within the eight-knot range. The new supercharged 48 GT increases that by nearly a full knot, even in moderate coastal breezes. On its maiden cruise to the Annapolis boat show last fall, the first 48 GT, the bright-red Scarlet Bee, sailed for more than 12 hours without dropping below nine knots. I love the original Morris 48, with its modest mast height and good performance in rough seas. It’s hard, though, to argue against the increased speed, effortless tacking, and stylish interior appointments of the GT. Contributing Editor Art Paine (Chuck Paine’s twin brother) worked at Morris Yachts from 1996-2001. He lives in Bernard, Maine.