By Rob McCall
In smiling days and sunny hours, the busy Bee from vernal flowers Sips nectar sweet and well supplies, his feet with pollen, a fragrant prize… Hence learn, my youthful friends, to weigh, and fix the worth of every day; In life’s fair prime your stores increase, that hoary age may pass in peace. —Jonathan Fisher, 1834 Dear Friends: 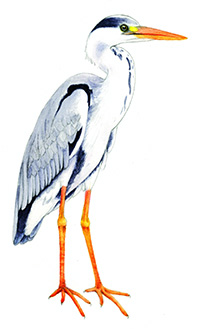 Illustration by Candice Hutchinson
The second wave of late-spring and early-summer wildflowers are coming into bloom, most notably buttercup, yellow hawkweed, soapwort, and the familiar oxeye daisy. These rise above the grass, now grown tall, and give the impression of floating in air. Meanwhile the lupine is passing its fullest bloom, and fuzzy pea-like pods are forming near the bottom of its flower stalks. Lupine is a legume, like peas and beans. These pods will ripen and dry until August when, on a hot and sunny day, they will burst open and fling their seeds far and wide. In meadows and pastures the field grasses, such as orchard grass and timothy, are also coming into flower. New growth of soft, light green needles appears on spruces and firs; these will lengthen and turn dark green as the summer progresses. Winged report and speculation, early June Northward migrating birds have either settled in or moved on and the summer birds, such as the herons and ospreys, have settled in next to the solid and steady year-rounders we know so well—such as the loons and eagles. Birds enchant us. From the old guy with a fifty-cent bag of popcorn who feeds pigeons in the park to the extreme birder with thousands of dollars’ worth of equipment who hopes to add one more sighting to his life-list in the jungles of New Caledonia, birds captivate us. They grip our souls in their tiny talons and enthrall us with their songs until we would walk to the ends of the earth to hear them. They fascinate us in childhood with their power of flight, and, from then on, roost in our imaginations until we, too, fly away. The great albatross has a wingspan of up to 12 feet and can stay aloft for weeks. The tiny hummingbird at the feeder has recently arrived from Panama. They fly, they fly, they fly! At night, we dream of soaring over rooftops, we see visions of beautiful winged women, and hallucinations of terrifying winged demons. Even our gods have wings. In the daytime, we hang feathers from our clothes and wear them in our hair or on our hats. We paint our faces with bird-like colors. They do what we can only dream of doing. They are like flying flowers. Their lilting songs give us chills; we long to understand their mystical lyrics. Please talk to me, little feathered one! Please land lightly on my hand or my shoulder and whisper in my ear. Please tell me what you are saying. Tell me what it is like to lift off from earth, to leave every threat behind, to live in the trees, to ride on the wind, to see everything from above, to be so holy! Enchant me again and again, little winged one! Natural and un-natural events, June If insects can feel happiness, it is safe to guess that there are several million happy bees darting and dancing from flower to flower through the orchards and blueberry barrens these days. Watching a honeybee or bumblebee nuzzle up to a fertile blossom and do its ecstatic dance among the petals is sure evidence that they are seriously partying down. In a dance that has been performed for eons, the flower beguiles the bee with its intoxicating perfume and the bee rewards the flower by gathering its pollen and spreading it far and wide. What reason is there to think that this does not feel exquisitely pleasurable to both? Some 60,000 hives of honeybees, Apis mellifera, are trucked into Maine to pollinate fruits and berries in the spring—truckloads and truckloads of joy. 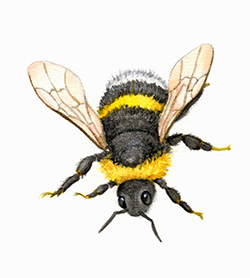 Illustration by Candice Hutchinson
One orchard I worked in ages ago got its hives each spring from an old man named Louie. He said his last name rhymed with “unconscious,” so we just called him Louie Unconscious. The dilapidated beehives were held together with tin, tarpaper, and wire, and so was the old truck he brought them in on. Every now and then one of the hives would disintegrate as we lifted it off the truck and we would run like the blue blazes through the blooming apple trees with clouds of angry bees behind. Unfortunately, honeybees today are endangered by colony collapse disorder. Evidence points to neonicotinoid pesticides, whose use increases yearly, as the root of the problem. In self-defense, pesticide manufacturers blame the varroa mite, which attacks bees in the hive. More likely, the pesticides weaken the hive and the mites finish the job. The European Union has taken the matter seriously enough to pass legislation that limits the use of these pesticides. Maine also has at least 270 species of wild bees that help with pollination, according to the University of Maine. At least 40 of these species work the blueberries. Did you know this? There are 15 native Maine species of the well-known bumblebee Apis bombus. One of these is even managed commercially for blueberry pollination. Bumblebees are particularly well suited for the Maine climate as they can raise their body temperature above that of their surroundings, enabling them to reproduce in colder conditions than other bees. Just like any Mainer, really. Natural events, July “Heliotrope,” as it is called around here, is going by along the midcoast but is still in bloom way downeast. It sports six-foot-tall fluted stems tinted red at the nodes, pinnate leaves, and clusters of aromatic white flowers with a tinge of purple. We say goodbye to another of the sweet, sweet presentations of summer. Botanists agree that this plant is not a heliotrope at all, but rather valerian (Valeriana officianalis), from which the highly effective herbal concoction valerian root is drawn. Its pharmaceutical approximation is Valium, a widely used muscle-relaxant and anti-depressant. With no knowledge of either the herbal or the pharmaceutical applications of this stately plant, it seems to your commentator that the sinfully rich aroma alone confers an intoxicating sense of joy and well-being, to the point that I begin to feel guilty walking near a stand of the plant. I find myself stooping down surreptitiously and inhaling forcefully, then looking around to see if anyone has noticed. Soon I am losing my train of thought, staring at the bright sky, and feeling the day’s plans slipping away while I am hypnotized by the voluptuous odor, the healing balm of summer. Seasonal events In summer it’s easy for us to forget that the crawling traffic, the bright plastic kayaks, pop-up tents, flip-flops, funny T-shirts, and fried clams are all about people trying to get closer to nature. This is good. If you can get past the awkwardness, it’s heart-warming, really. This hunger and thirst for the wild draws the multitudes from their hectic hives in sweltering cities to perch on a dirty picnic bench by the water and enthusiastically enjoy a steaming fresh lobster, or to struggle up a rugged mountain and see the soothing view from the summit. It’s enough to restore a little hope in humanity, seeing the swooning tourists thirstily soaking up the beauties of this fragile planet. Their hunger is so great, and their love. 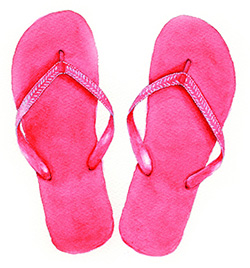 Illustration by Candice Hutchinson
Likewise, we spend some time at our camp each summer, taking council with cormorants, laughing with loons, and fantasizing in the fog. We watch the bats and the fireflies, and enjoy a sweet birch fire in the woodstove on days when the rest of the Northeast is sweating. We come back revived. So, too, our elected leaders leave their work behind and take a summer recess—probably good news for the rest of us. The thirst for the wild reaches all the way to the top of our rickety human pyramid. I hope that we all can see that this nature we seek is not just out there; it is in here, too. As without, so within. Seedpods to carry around with you From Edward Abbey: “This flower is irresistibly attractive… I have yet to look into one and not find a honeybee or bumblebee wallowing drunkenly inside, powdered with pollen, glutting itself on what must be a marvelous nectar. You can’t get them out of there, they won’t go home… until closing time.” From Konrad Lorenz, ethologist: “Only that kind of love for animals is beautiful and edifying which arises from the broader and more general love of the whole world of living creatures, a love whose most important and central feature must always be the love of mankind.” That’s the almanack for this time. But don’t take it from us—we’re no experts. Go out and see for yourself.
Yr. mst. hmble & obd’nt servant,
Rob McCall 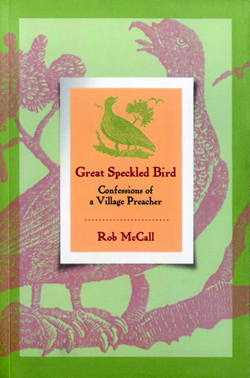 Rob McCall is a journalist, naturalist, and fiddler, and pastor of the First Congregational Church of Blue Hill, Maine UCC. This column derives from his weekly radio show on WERU, 89.9 FM, Blue Hill and 99.9 Bangor. The author’s latest book, Great Speckled Bird: Confessions of a Village Preacher (Pushcart Press), is available through your local bookstore. Readers can contact him directly via e-mail: awanadjoalmanack@gmail.com.