The August Maine Boats, Homes & Harbors Show on the Rockland waterfront is always interesting. There is plenty of eye candy on display, most of it the work of Maine’s established boatbuilding shops. Occasionally, though, a new boat from an unfamiliar boatbuilder captures the eye. 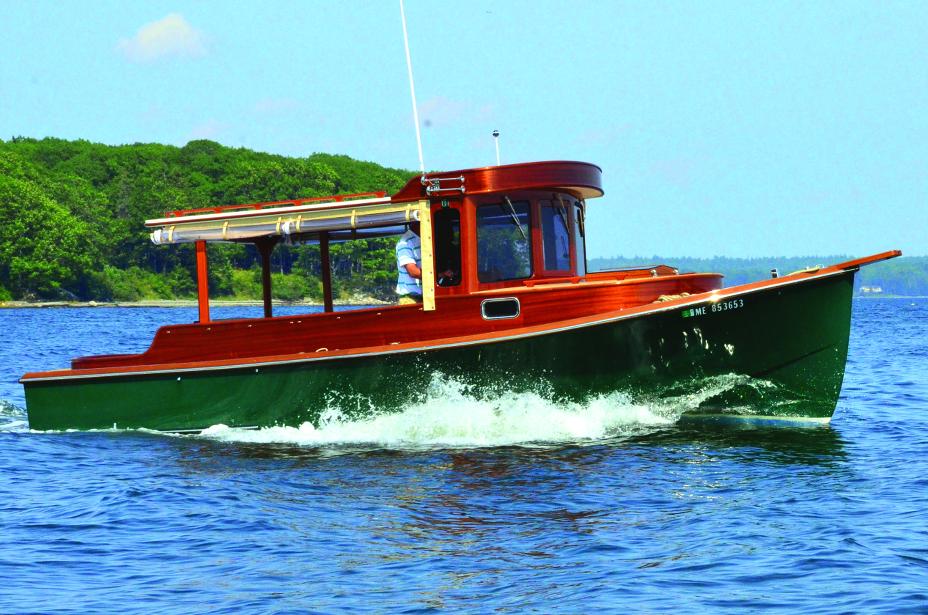 The Edgerly 26 combines a modern hull form with a classic cabin. Photo by Stephen Rappaport This year, a standout among the fleet of handsome sail and powerboats was the elegant 26-foot pocket motoryacht built by Edgerly Boat, a one-man shop located on a back road in the Hancock County town of Surry, a couple of miles from salt water.

Edgerly Boat is, essentially, Scott Edgerly, a graduate of the Eastport Boat School who worked at the Hinckley Company for several years before opening his own business, building teak parts for Hinckley and doing cabinetry and finish woodwork for other custom boatbuilders. His wife, Naomi—they met at Hinckley—wields an artist’s varnish brush.

After nearly a decade spent working for other shops, Scott decided it was time to design and build his own boat. The result, the Edgerly 26, a distinguished combination of modern hull form and classic topsides, made its 2015 debut in Rockland.

The Edgerly’s solid fiberglass hull has hard chines, a shallow V, and full keel and measures 26 feet overall, 25 feet on the waterline, with a 10-foot beam and 3-foot draft.  Powered by a 350-hp Mercruiser with a conventional shaft drive, the boat’s “knife edge” bow cuts through the water with little fuss, cruising comfortably between 9 and 13 knots. Top speed is 23 knots at 3,600 RPM, but, with a different wheel, Edgerly says the boat should make 26 knots at 4,200 RPM. With the Mercruiser, fuel consumption is about 6.2 gallons per hour at 13 knots. The boat can also be fitted with a 360-horsepower Yanmar diesel.

What really distinguishes the Edgerly 26 are the design and finish of the topsides, which wouldn’t look out of place on a small Elco or Consolidated from yachting’s golden era between the two world wars.

The tall, handsome pilothouse has three large forward windows and shapely side windows, and the trunk cabin is elegantly curved at the forward end. Both are built from a foam-cored structure clad inside and out with impeccably varnished sapele mahogany. Decks, cabin sole, and cockpit sole are teak. The helm, all of the cabin furniture, and the entire interior—including an engine box that incorporates a two-burner stove and deep stainless-steel sink—glow with the warmth of varnished mahogany. Cockpit and cabin ceilings are brightly varnished, too. A forward cabin with V-berths is just as elegant. Overheads feature white painted tongue-and-groove paneling.

The Edgerly 26 hull can be finished off in several configurations and “would be a nice, stable platform for fishing,” according to its builder.

The boat displayed at the Rockland show was “not for the average boater, but for someone who likes the art of boatbuilding,” Edgerly said. “I thought I’d build the boat I like and see how everybody else likes it.”

Stephen Rappaport is the Waterfront Editor at The Ellsworth American, has lived in Maine for nearly 30 years, and is a lifelong sailor.