The color of our dreams seems to depend on our age. In a study published not too long ago, researchers found that baby boomers described their nocturnal visions in black and white, while younger subjects said they dreamed mostly in color—whether in high-def or not wasn’t pursued, for some odd reason. 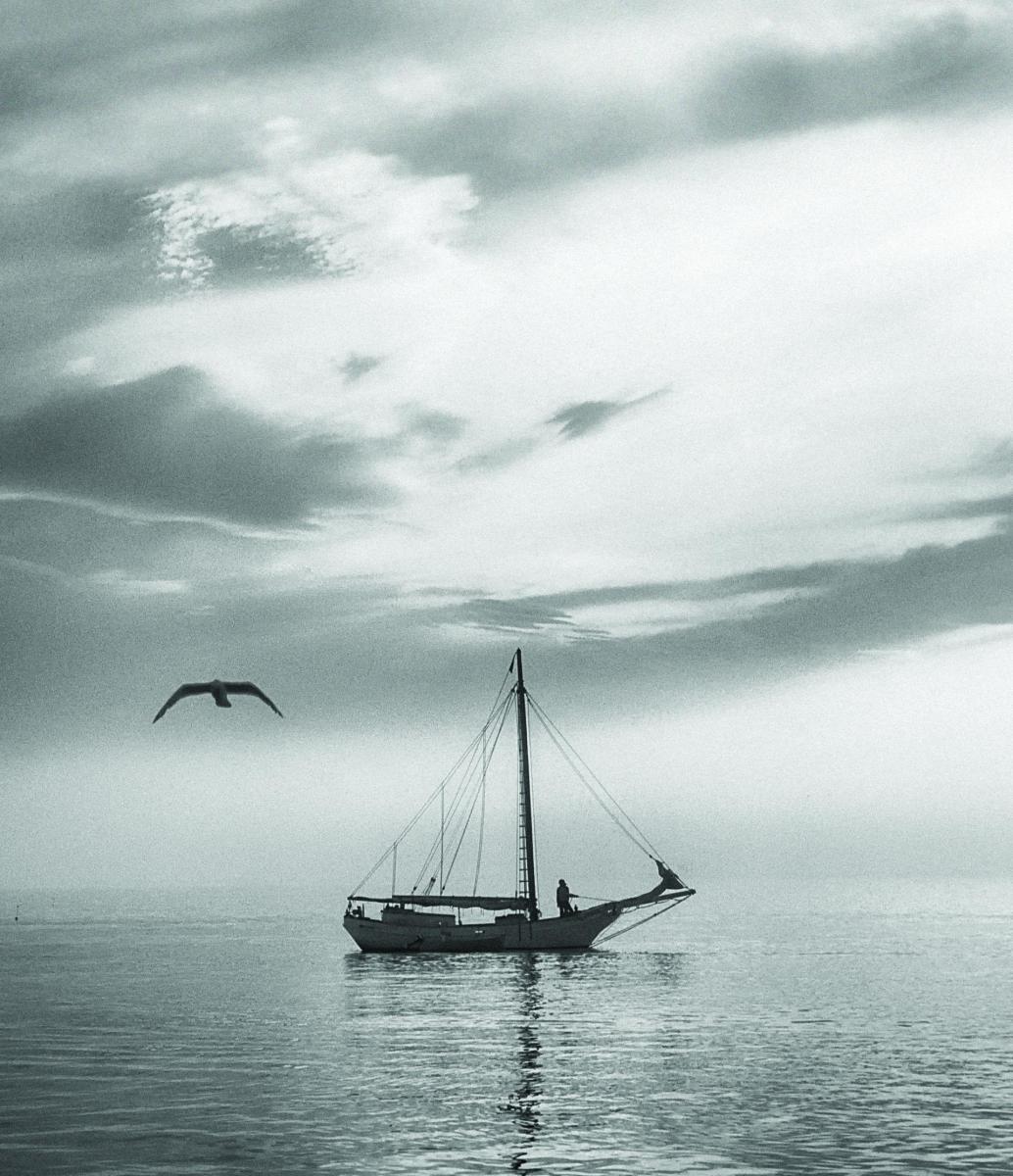 Photograph by Joe Devenney In any case, the researchers speculated that growing up in the early post-World War II years contributed mightily to the black-and-white predisposition. Back then, televisions, newspapers, and even some of the most popular magazines appeared mostly in black and white. Perhaps boomers still have a soft spot for the beauties of a fine, colorless presentation, the oneirologists concluded.

Taken a bit further, could denizens of the Maine coast be similarly predisposed to dream, and perhaps even consciously contemplate, in black and white? After all, we are no strangers to days and days of fog turning our world into a pleasant play of grays, half-tones, and faded sunlight. We already know there is great beauty and even mystery in a world devoid of the splashiness we see in the commercial world every day.

My preference for a gaff-rigged sailboat, like the one pictured in the scene so artfully captured here by Maine photographer Joe Devenney, is somewhat akin to dreaming in black and white. This picture reminds me of Triolet—my first boat and, like a first love, an unforgettable gaffer that still haunts my dreams.

It was 1975 when fate showed me Triolet’s handsome gaff rig. By that time, gaffers had been pretty thoroughly displaced by the traditional Bermuda rig’s signature triangular sail.

Instantly out of step with my trapezoidal mainsail, I found blind prejudice at nearly every point of the conversational compass.

Sailing Triolet down the Intracoastal Waterway to Florida, I heard many discouraging opinions: gaff sails are too complicated, too dangerous, can’t sail well to windward, too slow in tight quarters, and so on. Like finding someone who still appreciates black-and-white photography, it’s hard to find a gaff rig aficionado—except when I sailed my engineless, 30-foot sloop home to Maine.

Here, no one doubted my sanity. A few kind-hearted folks even helped me put an engine back in the old gal, which definitely made anchoring, picking up moorings, and coming into docks less challenging. Eventually, I sold her and moved on to larger Bermuda-rigged boats, mainly because gaffers in larger sizes were so scarce.

Lately, though, I’ve returned to my first passion, downsizing to a jaunty little 16-foot Marshall Sandpiper, a catboat with one large gaff sail. I also haunt used bookstores these days, looking for more coffee table books with those handsome old black-and-white photos of all things nautical, preferably with a backdrop in Maine.

As for the dreaming, I am afraid I’d be no help to the valiant researchers investigating the nighttime mind. Obtaining funding to study someone who not only dreams in black and white but also imagines in gaff rig and in fog-shrouded, coastal Maine is probably too much of a stretch—even for a government grant.

Ken Textor is a sailor who has written for numerous boating publications and Joe Devenney is a freelance photographer who works in Maine, New England, and Maritime Canada. The two collaborated on The Hidden Coast of Maine: Isles of Shoals to West Quoddy Head, published in 2014 by Tilbury House.