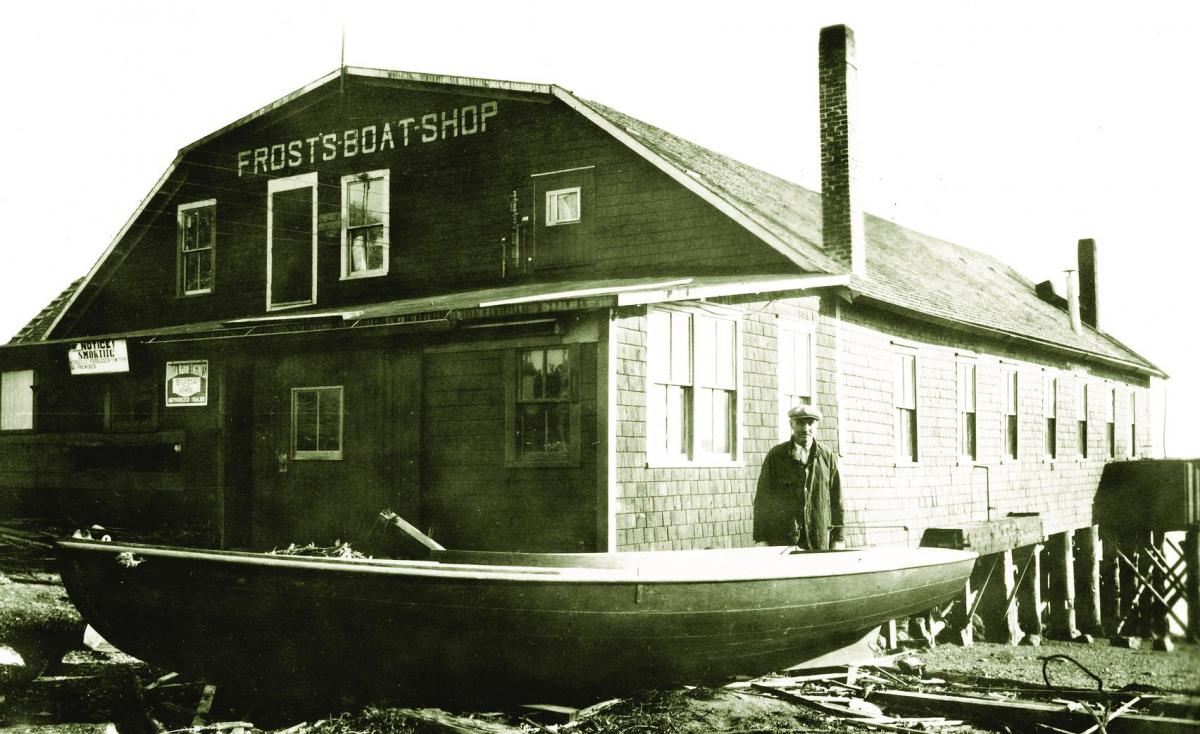 William Frost, who is credited with originating the Maine-style lobsterboat, could build whatever a customer wanted, including fast rumrunners. In this 1933 photo, he poses with a small sailing pleasure boat, which would become increasingly important in the Maine boatbuilding industry, but was rare before WW II. Courtesy Penobscot Marine Museum, Atlantic Fisherman Collection, W.W. Hall photograph

Working in the Beals Island/Jonesport area during Prohibition, William “Will” Frost built hundreds of boats that were considered the fastest of their size and type. Many were used to smuggle rum; the very qualities that made them good for rum-running also made them good for lobstering. Frost’s semi-displacement hulls, renowned for maintaining speed at capacity, have influenced the design of lobsterboats ever since.

Frost was born in 1874 and raised at Digby Neck, Nova Scotia. His family had built square-riggers that traveled the world, and he learned the trade from his father and grandfather.

Frost started building boats on his own at age 19. His first was a 26' centerboard sloop named Linnet. Several other small sailboats followed. Then, intrigued by the gas engine, he developed a hull design that would suit the engine’s potential, and began building sleek, smooth hulls that sliced through the water with minimum resistance and maximum speed. His first powerboat, the Toronto, splashed in 1906. In 1912, he launched the Ethel Maud for his brother-in-law Shirley Tidd. It was a consistent winner at the local Digby races—one of which, according to family lore, was witnessed by Queen Victoria’s son, Prince Arthur, then Canada’s Royal Governor-General.

He was getting a reputation for building fast boats, often powered by more than one engine, said Jamie Lowell, Frost’s great-grandson. “At one race, one of the engines went down and he still won the race on one engine.” 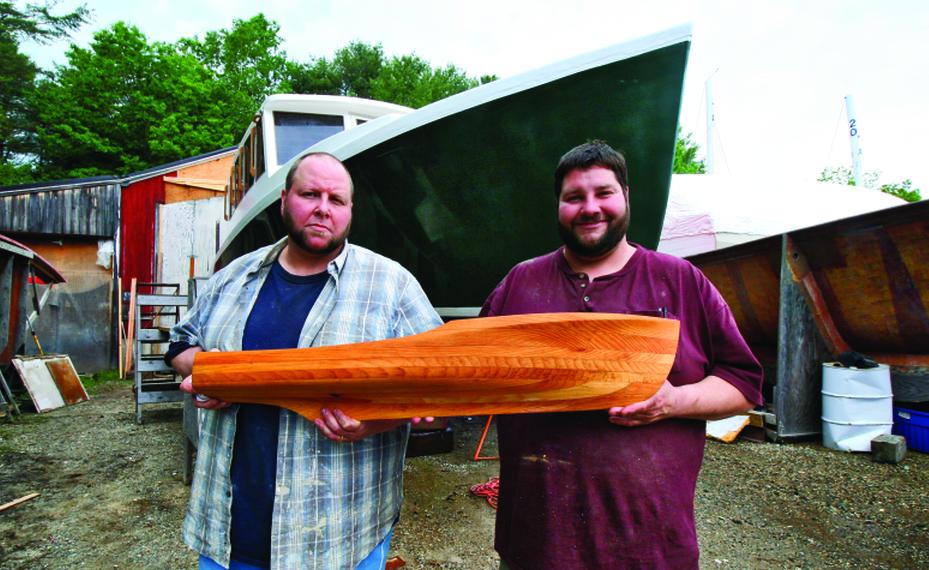 From left, Jamie and Joseph Lowell hold a half model carved by Jamie based on an old Will Frost design. The brothers have continued the family building tradition at Lowell Brothers in Yarmouth. Portrait of Jamie and Joe Lowell by Laurie Schreiber Jamie and his brother Joseph Lowell carry on the family boatbuilding tradition today at Lowell Brothers boatyard in Yarmouth, Maine. They learned the craft from their father, Carroll Lowell, and their grandfather, Riley Lowell. The Lowell and Frost families were connected when Riley married Will Frost’s daughter Wilhelmina. Other prominent boatbuilders in the family include Carroll’s brother, Daniel Lowell; and their oldest brother, Royal Lowell, who was a designer for boatbuilders such as JC Boatworks, Bruno & Stillman, Newman, Sisu, Harris, and others.

If the Frosts and Lowells were boatbuilding royalty, Will Frost would be king, according to Jamie and Joseph.

Not that Frost didn’t have his troubles. Around the time he built the Ethel Maud, he invested heavily in the construction of a ferry for a state contract that ended up going to another company.

“Gramps had leveraged everything for the contract,” said Jamie. “They took the bed, the bureaus, everything but the clothes on their backs. He went into receivership, and in Canada, if you couldn’t pay your debt you went to the big house. So he got the hell out of Dodge and went to his cousin’s place at Beals Island.”

The cousin didn’t have much going on, so Frost set up on his own. His reputation for fast, well-made boats followed him, and he soon had commissions for fishing boats. During World War I,
he returned to Digby Neck and helped complete construction of the freight steamer Frances E. Boutilier, then continued building fishing boats. He moved back to Beals Island in 1919. Frost’s renown grew as he took on commissions and expanded his crew to build lobsterboats, sardine carriers, motorsailers, and cruisers in the 30- to 60-foot range. 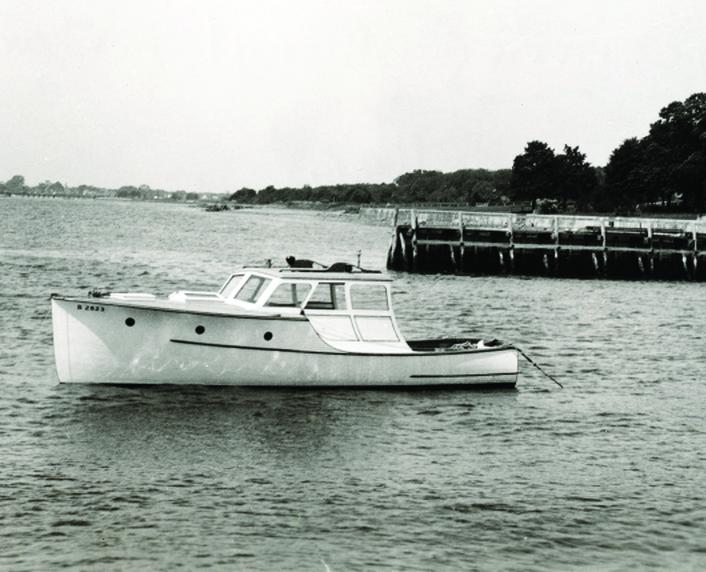 Frost built this motorcruiser, Kenebis, for a Rhode Island customer in 1935. Photo courtesy Penobscot Marine Museum, Atlantic Fisherman Collection When Prohibition started in 1920, Frost’s boats were already well known for their speed when carrying a heavy load. According to family lore, a fellow from Rockland who was connected to the Mafia in New Jersey took notice.

Soon, Frost was building boats specifically for the illegal rum trade, first on Beals Island and then at a larger shop in neighboring Jonesport, where he shifted operations in 1928. The boats ranged from 30 to 80 feet long.

“Will Frost was the true originator of semi-displacement hull design,” said Jamie. “And that was the origin of the Maine lobsterboat as we know it. There were similar types of boats, but nothing like what he developed. Before him, they were taking displacement designs and lengthening them to be able to get speed. But he understood how the semi-displacement hull worked, from planing to running along, to having a net in the water.”

Frost’s lobsterboats, which became known as “Jonesporters” or “Beals Islanders,” featured low freeboard, a narrow beam and a high bow. His early designs featured a torpedo stern, then he introduced the concept of a square stern. His shelters evolved from a canvas tent in the bow to a canvas “melon” spray hood, a canvas hood with a wooden house attached behind, and then, by the time Prohibition rolled around, the type of wooden trunk cabin and house commonly seen on lobsterboats today. 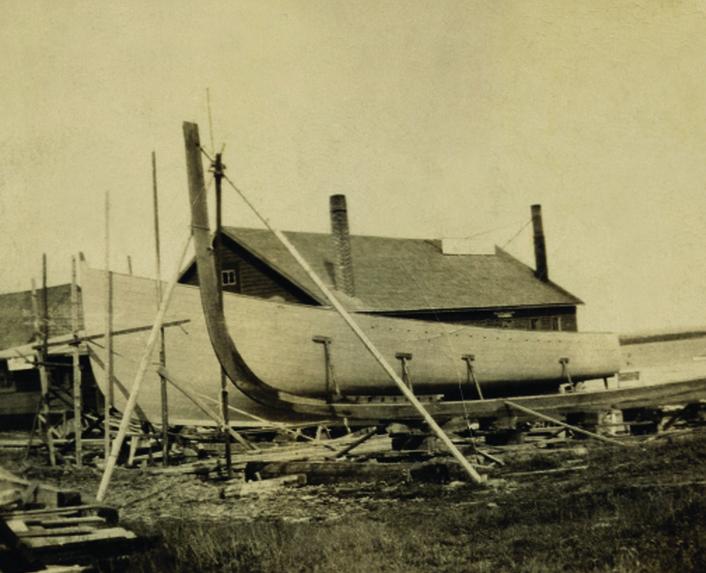 A Frost rumrunner at his Jonesport shop, circa the late 1920s. Photo courtesy Lowell Brothers Frost also built commuter boats and yachts, and continued to experiment with speed. In the 1920s, he designed an outboard-powered boat, the Miss Jonesport, that had air induction vents, allowing air to flow through the bottom and provide a cushion for the boat, lifting it out of the water. A photo shows it racing along with most of the hull out of the water. The Miss Jonesport achieved speeds of 40 or 50 miles per hour. Family legend has it that when Frost demonstrated the boat, it was going so fast that it slammed down on a deadhead (an underwater log) and the boat cracked up.

The boats were narrow: A 38-footer, for example, had an 8-foot beam. Frost also developed a V-shaped split windshield that gave the designs a classier look than the old flat windshields. He fitted them with one, two, and sometimes three V12 airplane engines and the boats flew along at anywhere from 35 to 50 miles per hour.

Most of his rumrunners were incognito. They looked like fishing boats, said Jamie. “They’d have a net out so they’d look like they were seining. It was all a façade to hide their activity.”

There were clues as to their true purpose, though. Small shelters left more deck space for cargo. Tiny portholes helped captain and crew dodge the revenuers’ bullets.

Frost is said to have built fast boats for the Mafia, the Kennedy family, and the Coast Guard—all at the same time during Prohibition. His granddaughter, Harriet Vaughan, said the first time the manager of the Merrill Trust Bank in Jonesport saw a $1,000 bill was when her mother, the bookkeeper, walked in with it as a deposit on a rumrunner.

But the Great Depression and the end of Prohibition brought about hard times, and in 1933, Frost closed up shop and took his family to Somerville, Massachusetts, at the invitation of a wealthy doctor who promised a well-off clientele with many yachts to maintain. Frost established Frost & Co. there. Shortly after the move, the doctor passed away. In 1935, Frost and his family moved to Tiverton, Rhode Island, and established William Frost Co., which was run by his son Bert. In 1944, he returned to Maine, staying with family in the Boothbay area.

Frost retired briefly at age 72 due to poor health, but then he was asked to build a boat by a friend, Henry Dyer of Chebeague Island. So Frost set up shop again in Portland, where he designed and built the well-known Merganser, Leonard W, No Name, and many more boats over the next six years.

“Nobody was building the same design he was,” said Jamie, who explained that at the time no one understood how a semi-displacement hull worked. “But you look at a boat built today, whether it’s from Friendship or Mount Desert Island or Beals Island, and it’s got Will Frost’s thumbprint on that boat.”