Through the generations in a Boston Whaler 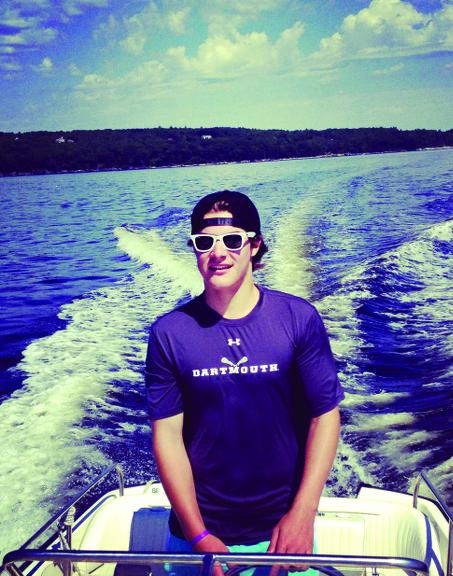 Drew West at the helm of the family Whaler... If it were my choice, I would live on our Boston Whaler, even though the hard white fiberglass would be a little uncomfortable. The feeling of rocking with the waves mixed with a cool salty breeze is irresistible. The fact that the 90-horsepower Honda on the back can take me anywhere, with the turn of a key and a push of the throttle, doesn’t hurt either. She is perfect for bombing around the harbor or cruising to get ice cream. However, my true love for her doesn’t come from any of these activities; it stems from the summers I spent with my father on our Whaler.

From the year I turned two, when my father bought our Whaler, until I was twelve, when my father died, our time on the boat was the most pure and adventurous father-son experience we had. It started with our fishing expeditions. I didn’t mind waking up at 5 a.m to troll on the morning glass that we called the lake, because sleep was for the weak and I wanted a fresh lunch.

Thanks to our third-generation West family tackle box, by age five, I was taking down the biggest fish in Moosehead Lake. At age seven, my tubing years started. My brother Geoff and I would fight to jump onto the tube first; the winner would postpone a plunge into the freezing waters until my dad “cracked the whip” and the passenger tumbled off. Then came the honor of taking our Whaler to the mooring at day’s end. By this time the sun had set and the water was usually back to its calm, mirror-like appearance. Dad would turn the running lights on, making us a ghost in the dark with a red-green head, and white tail. With the right balance of pleading and playful coercion, I could get him to “give her everything” for a couple of seconds. We would then swing around to the mooring and grab the canoe that would carry us to shore after securing the lady against the waves (that really only existed in my dreams). 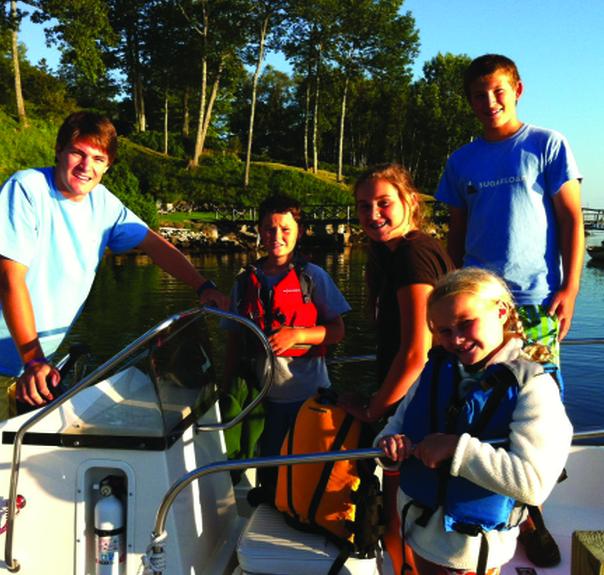 ...and with a boatload of cousins. Photos courtesy Drew West(2)

When my father died, my first thought was “Who is going to take me out on the Whaler?” I couldn’t imagine that there would be no more father-son excursions in the boat. My sadness only deepened when I learned that my mother needed to sell our lake house and it looked as if our Whaler was going with it. But we had just moved to the ocean and I knew that this was our chance to bring our Whaler with us. Using the same persuasion that had worked to get my father to “give her everything,” along with promises to earn money for gas and other boat expenses, Geoff and I convinced our mom to keep our Whaler.

We brought the boat down to our new home on the coast and then were tasked with launching her. (Kudos to my mom for backing in a 17-foot boat on a trailer the first try with the whole yacht club watching.) The second I jumped off the dock and into the water to float the boat off, just as my dad had done a thousand times before, I felt closer to him than ever. I was no longer doing what he said; instead, I was doing exactly what he would have done. That’s when I realized that it was my turn to captain the Whaler; the keys had passed from father to son.

Every time I step over the gunwale or guide her across the gentle swells with friends aboard, I feel the joy that my father must have felt as he took his adoring son out on the water. And it’s why, when a guest is in town or someone starts to feel a longing for the sea, I jump with the excitement of sharing my (and my father’s) beautiful, floating heaven.

Drew West has lived in Rockport since 2010 and attends Williams College. When not on his Whaler, he can be found rowing on Megunticook Lake or golfing with his brother, Geoff.