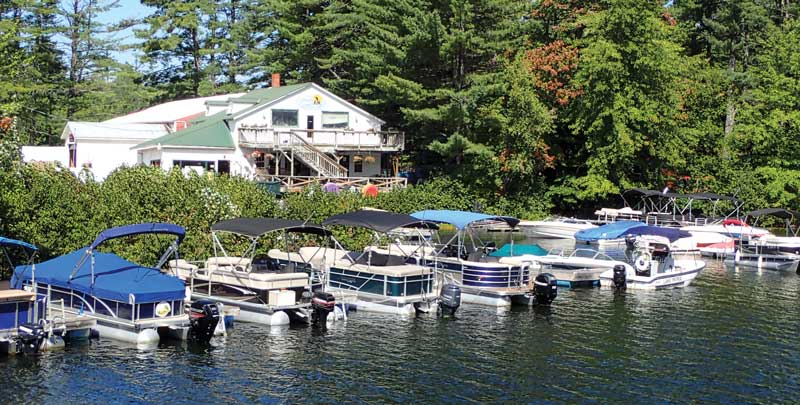 Pontoon boats are a popular way to cruise the lake. They’re available to rent, along with other small craft, at Kezar Lake Marina. Be sure to reserve early during the peak season. Photo by Rick Steadman

If we’d known about the breakfast special at Rosie’s Lovell Village Store—two eggs, pork chop, hash browns, baked beans, and toast for $8.49—we might not have stopped en route to town for apple-cider donuts at Pietree Orchard. But that would have been a crime.

About 10 minutes east of Lovell in Sweden, Pietree Orchard is owned by author Tabitha King, who bought it a dozen years ago to save it from development. Its more than 50 acres of fields and fruit trees—heavy with apples on a bright blue September day—roll out from a welcoming, ridge-top farm shop where we browsed bins of colorful vegetables and fruit as well as an array of just-baked goodies. We left with not one, but two bags of petite, moist cider donuts, which I’d dusted with cinnamon from a shaker on the counter, plus a golden-crusted apple pie.

Two delectable donuts later, we arrived at Rosie’s, where the coffee was hot and the stools were filled with locals catching up on the news. Out in the parking lot, there were few from-away cars amid the pickups, suggesting that Lovell’s seasonal residents were already thinning out. 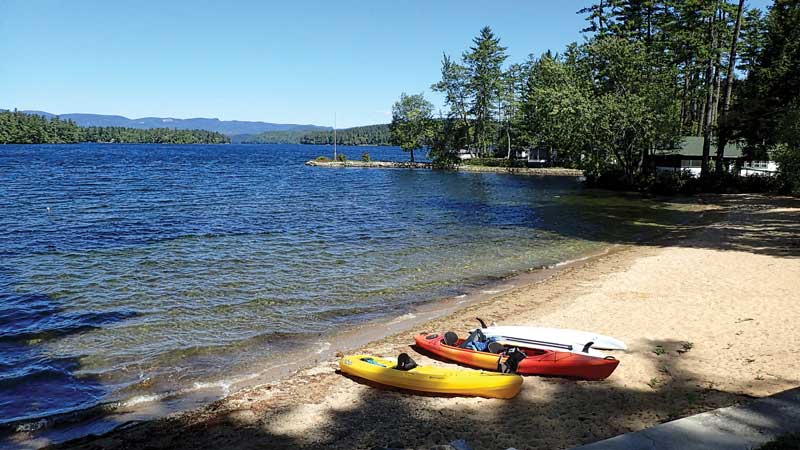 From Pleasant Point Beach, lake views include a backdrop with peaks of the White Mountains. Photo by Rick Steadman

Summertime rusticators have been coming to Kezar Lake for over a century. About nine miles long and a mile wide at its broadest, its pristine waters continue to woo families with simple pastimes: swimming, boating, waterskiing, paddleboarding, fishing for salmon, lake trout, smallmouth bass, and other species, and chilling on the porches of vintage lodges and private clubs along the shore.

Route 5 runs parallel to the lake’s eastern side, connecting Lovell, Center Lovell, and North Lovell, yet it affords few glimpses of the water. For a better look, we drove to a bridge that crosses the narrowest part of the lake, at a spot appropriately called The Narrows. Beside the bridge, Kezar Lake Marina offers a variety of small-boat rentals, and I’d thought we’d take a little runabout out for a couple of hours. On arrival, however, we found a chilly wind was blowing at least 20, straight up the lake—conditions that would bash all the pleasure out of a sightseeing putter.

Instead, we continued a short way up Route 5 and turned off to Pleasant Point Beach. Standing on its windblown sands, we were treated to a panorama of deep blue, whitecap-dusted water set against even bluer White Mountains rising just beyond the New Hampshire border. It was easy to understand why people keep returning to Kezar.

At nearby Quisisana Resort, it’s not just the lakeside location that pulls guests back year after year. It’s also the remarkable music. Uber-talented staffers, hand-picked from conservatory and college music programs, work not only as chambermaids, cooks, and servers at Quisisana, but also as performers in nightly presentations that range from Broadway musicals to opera to chamber music. The resort’s 10-week season begins in June and runs through late August.

Heading back along Route 5, we pulled over at The Wonder Store to prowl its jumble of antiques and collectibles and score a couple of treasures. We also stopped at Harvest Gold Gallery to admire fine sculpture, jewelry, paintings, and furniture before looping over the top of the lake and plunging down a forested dirt road that traces the lake’s western side. As we bumped over the ruts and rocks, we passed numerous rough driveways that disappeared into the woods, no doubt headed to private camps. I imagined how wonderful it must feel to drive down one of those lanes, returning yet again to a well-loved family retreat on Kezar Lake.

If You Go to Kezar Lake

Getting on the Water

Kezar Lake Marina, beside the bridge at The Narrows, offers half-day, daily, and weekly rentals of motorboats, kayaks, canoes, water skis, and paddleboards. For those arriving with a boat, there’s a public launching ramp just west of the marina.

Lovers of country primitives will find much to covet at Four Cedars Antiques and William Doyle Antiques. The Wonder Store is an irresistible hodgepodge  of old stuff. Multiple rooms at Harvest Gold Gallery are filled with beautifully crafted furniture, sculpture, paintings, and jewelry. It’s worth a stop just to admire the lake views from the shop’s picket-fenced garden.

Loon’s Nest Restaurant, at Kezar Lake Marina, is an enjoyable perch for dining overlooking the lake. Everyone goes to Rosie’s Lovell Village Store, whether for the comfort-food menu or to pick up a few items from the convenience store.  Another option is the Center Lovell Market. Hidden away next to Lake Kezar Country Club’s golf course, Ebenezer’s Restaurant and Pub has been hailed by Beer Advocate as the world’s best beer bar and named the number-one beer destination in the U.S. by Travel & Leisure. It’s especially known for its impressive selection of Belgian beers on draft.