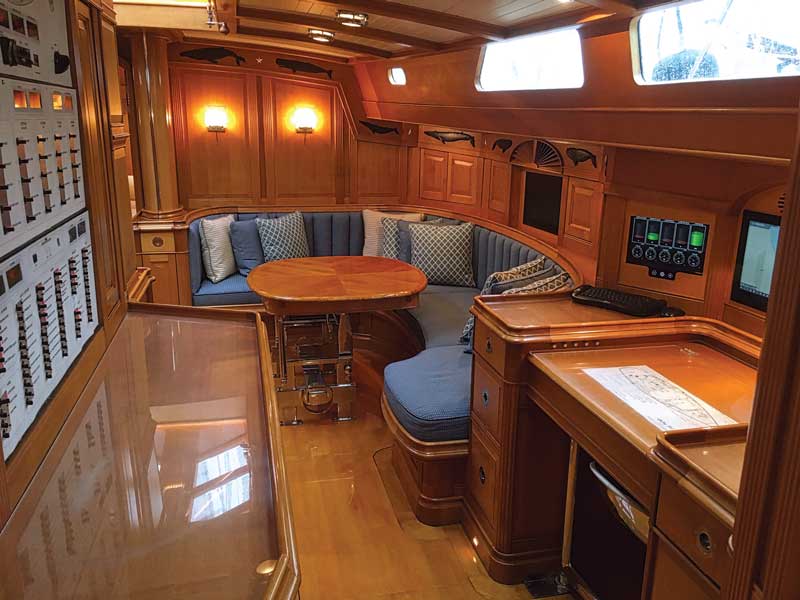 A Hinckley Sou’wester 70 built in the mid 1990s gained a new lease on sailing life after a 20-month refit at Front Street Shipyard in Belfast.

Many people consider this design the most beautiful non-pilothouse Hinckley sailboat ever produced. This particular boat, which is now named Defiant, was the first 70 built by Hinckley. The woodwork on the interior was a particular tour-de-force of Hinckley joiner work.

Since then the yacht has put a lot of ocean under her keel. Under new ownership, Defiant arrived at Front Street in 2017 ready for a major refit that would restore her yacht quality and customize her to her new owner’s taste. 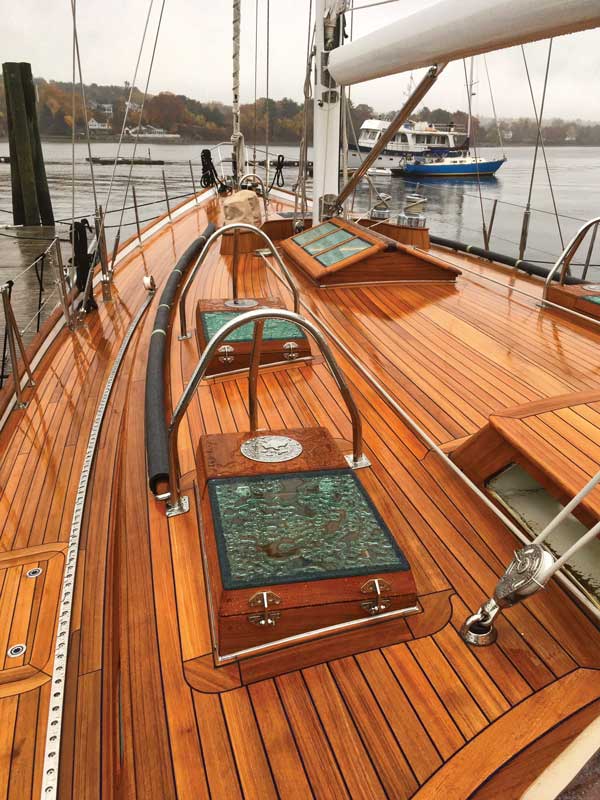 Teak veneers on the cabintop and coaming were replaced and all the exterior varnish was stripped and redone. Photo courtesy Front Street Shipyard Most of the deck and housing on a Hinckley 70 is teak wood, some bare, some varnished. Even teak gets worn after 20 years. The refit included replacing all the teak veneers on the cabintop island and coaming, and installing new teak decks. All the exterior varnish was stripped and built back up. The cockpit also was redesigned to allow more movement for those aboard.

A major project was to cut away a large part of the aft underbody, including the skeg-hung rudder, and install a balanced carbon blade—a change designed to improve sailing performance and helm control.

Nicely fitting in with the new aft underbody, Defiant got a new hydraulic stern thruster—any 70-foot sailboat will be more pleasing with one of those. As is more common in large yachts with watermakers that reliably work, several fuel tanks were installed to replace water tanks. This will greatly extend range under power. Also new are all the refrigeration and air conditioning units, and new hydraulic lines.

The talented joiner work team at Front Street made some changes to the beautiful interior. Most of these were to rework stowage and cabinetry in the owner’s and two guest cabins. They built two new tables, both wood works of art. On deck they created an elevated seat behind the helm.

Given that all that wood, shiny or not, is the essence of what a Hinckley 70 is about, one would be hard-pressed to explain in what way Defiant is less spectacular than some new design, not nearly as classic, that might cost many multiples of Defiant’s restoration price.