In the Key of Color 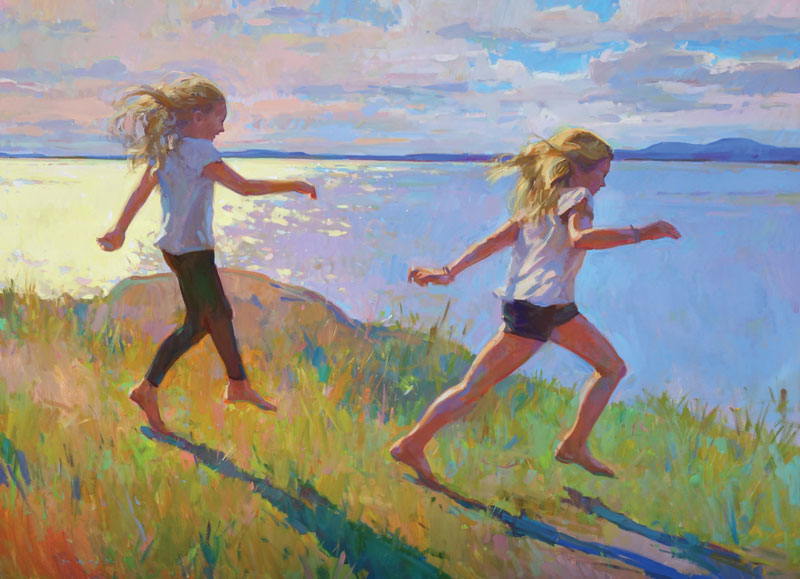 In Leap, Colin Page painted his daughters Audrey and Hazel running and playing in a field on Isle au Haut. His children have been a frequent subject in his paintings. Oil on linen, 54" x 72", 2020.

On a visit to Dix Island off South Thomaston last summer, the painter Colin Page was walking with his daughter Hazel past an abandoned quarry. They had been to a gathering of families, all the kids running around, picking blackberries and having fun. Hazel “was kind of done” with the excitement, Page recalled, and wanted to return to the house where they were staying.

“It’s one of those moments, probably 30 seconds, I don’t even know, but she just went up to the edge of the quarry and looked out and it felt like she found peace for a minute.” Page took several photos of the scene with his phone before they continued on.

This past winter those photos inspired Quarry, a portrait of the eight-year-old girl gazing out over the swimming hole. Hazel, and Page’s other daughter, Audrey, appear in a number of paintings these days, records of magical times, “remembering what we were doing and what it all was,” Page said.

The paintings bring to mind the work of Frank W. Benson, the American Impressionist who painted his daughters in the summer sun on North Haven in the early 1900s. Page knows Benson’s work, and has even visited his Wooster Farm studio on the island. He admires Benson’s family portraits for being beautifully painted, loving but not saccharine. Page wants his paintings of his children to be meaningful in the same way—tender, but not over-the-top.

While he continues to paint outdoors whenever possible, especially in the warmer months, Page works more from photographs these days, while using his “plein air knowledge.” A number of recent landscapes were inspired by trips to Maine islands last summer, including Dix, Isle au Haut, and North Haven. He loves the sense of discovery found on these visits, like coming across carved granite column capitals in a field or a lawn accented with glowing dandelions.

Each painting features a certain color key. Figuring out how to set that key and create a design around it is Page’s goal with each canvas. At the same time, he tries to keep the brushwork gestural, which accounts for the immediacy of his images.

Page is a master of light on water. In many of his paintings the viewer looks into the sun as it bounces off the surface. A warm/cool contrast creates a kind of vibration. “I try to find ways to play with that,” Page said, and to make sure that the color notes are “concisely stated and surely mixed and nicely put in.”

Page loves painting Maine’s working waterfront, often going to Spruce Head, Port Clyde, and other places where there’s less tourist traffic. When he moved to Maine, he hadn’t ever painted a boat. At first avoiding them as too complicated a subject, he eventually embraced the challenge of getting a boat just right, sitting in the water or propped on jack stands where the whole hull is visible. The process was helped along when he acquired his own small sailboat and taught himself to sail.

Page also likes being around people who are engaged in daily physical work, “like going out fishing every day no matter the weather.” As someone who likes busy paintings “when there’s a lot of information to try to wrangle and organize,” he loves the mess of lobster traps and other gear found on a wharf.

This love of complex visual elements carries over into Page’s still lifes, which he paints in the winter. The still lifes, he noted, are basically a way to take a colorful tablecloth, which sets the color scheme, and build out from there into “something that will be fun to paint.” He has studied the tabletop arrangements of contemporary American painter Janet Fish, the late French post-impressionists Pierre Bonnard and Edouard Vuillard, and the decorative inventions of Henri Matisse.

In March during the COVID-19 shutdown, Page worked on a lobster/ seafood-themed commission, sharing the process on Instagram. He posted a picture of the still life at the start, with just the bare canvas and a theme, and then followed up with the major shapes and color-blocking under way. “People got a kick out of it,” he reported, including former students, some of whom asked pointed questions, like “What are you doing mixing that orange next to that blue?”

In the summer and fall Page teaches a handful of workshops in Maine and elsewhere—not too many, he said, because he’d prefer to be painting as much as possible. He enjoys verbalizing a process he usually does in his head. “To sit and talk through that with a class and do a demo: it’s almost like I’m taking the class too because it reinforces the fundamentals.”

Page also enjoys seeing what his students select as a subject after they’ve set up their easels at a particular locale. Someone will pick something that he never thought to paint. “The excitement that they have at the newness of the place—it’s infectious.” He tries to cap the size of each class at 12, so as to be able to visit each person individually, multiple times throughout the day. He can see the paintings develop and change over the week and gets to know the personality of the individuals. 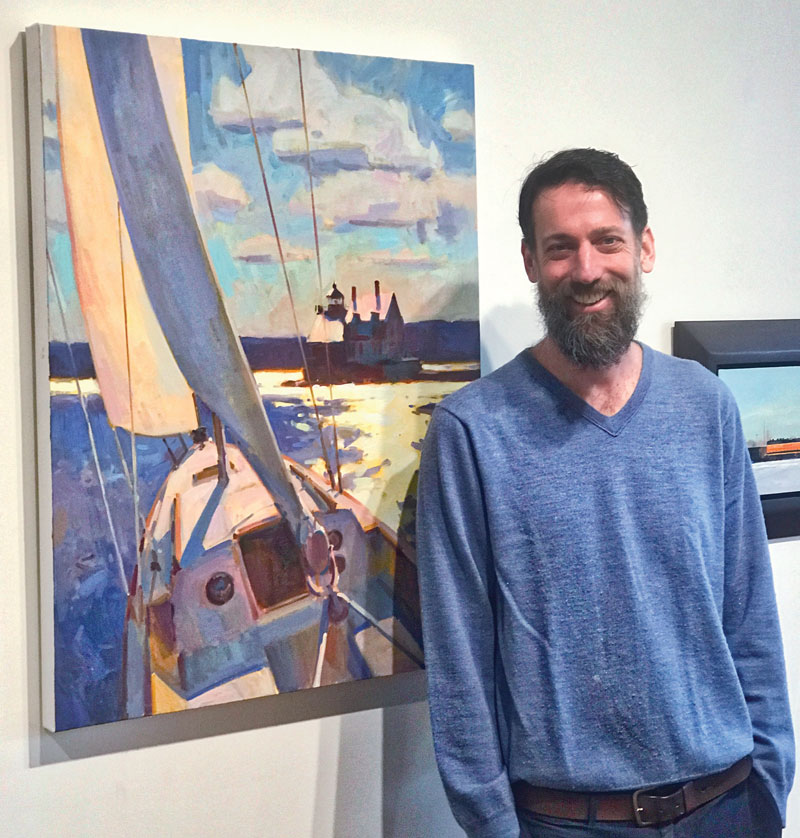 The artist Colin Page stands next to a painting he did of his Cape Dory sailing in to Rockland. Photo by Polly Saltonstall

Page was born in Kalamazoo, Michigan, but by the time he turned two, his family had settled in Baltimore. His first full dive into art happened as a student at the Baltimore School for the Arts. The high school offered half-day academics, and half-day arts—a college foundation program that included figure painting and drawing, sculpture, photography, and printmaking.

Page attended the Rhode Island School of Design for two years before transferring to Cooper Union for the Advancement of Science and Art in New York City. While there, he came under the sway of abstract-expressionist painter Don Kunz. Page found Kunz’s upbeat philosophy toward art and living, his “total love” of color and materials, more influential than the way he painted.

After graduating, Page did a bunch of odd jobs: making pizza on the Jersey shore, being a security guard at the Noguchi Museum in Long Island City, and working for a fine art photographer. He remembers his first day at the latter job: “We went to pick up [the photographer’s] gear at Frank Stella’s studio and then drove out to Helen Frankenthaler’s studio where we spent the next two days shooting her work.” Quite the introductory art trip.

While living in Green Point, in Brooklyn, with three other guys, he painted in a corner of his bedroom. When he visited his mother in New Jersey, he’d paint outside. He embraced plein air painting because he liked being outdoors, and the practice got him interested in trying to figure out how to use color and gestural brushstrokes to capture light, atmosphere, or a theme.

Page learned about himself as an artist through the demands of painting on location where the light is changing, boats are moving off, “a truck’s going to drive away or park in front of you.” He learned to prioritize, to identify what’s most important, “not fight the paint but let it work with you through direct, clean purposeful application.” He sometimes refers to the approach as “finding your handwriting.” 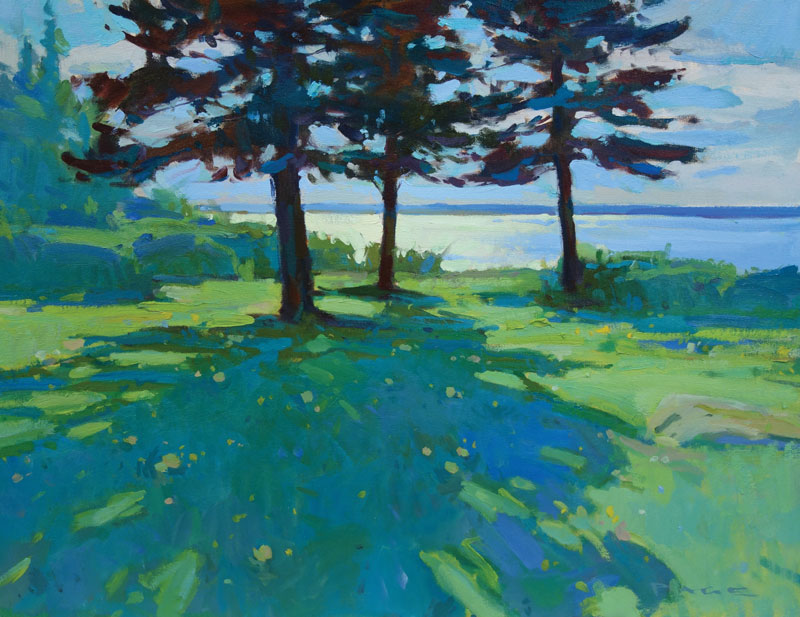 As paintings began to pile up, Page’s mother encouraged him to try outdoor art shows. With the sales from the first summer, plus income from his odd jobs, he didn’t have to work the following winter, so he painted. After the same thing happened the next summer, he realized he could get by on summer pay. “Granted I was 22 and had few needs,” he noted.

He went to Maine on a whim one November, getting a six-month rental on the ocean in Georgetown. When he met someone from Camden, he moved farther down east. He was impressed by the work ethic: “Everyone was driven by their creativity.”

Eventually, Page started showing at the Camden Falls Gallery, and then Dowling Walsh in Rockland took him on. His prices went up and his framing improved. “Jake [Dowling] helped me become more professional in my presentation,” he said.

Now Page has his own gallery, the Page Gallery, opened last year on Bay View Street in Camden. He has embraced this new role, be it hanging shows, cutting labels, or visiting artist’s studios. He enjoys getting to talk to people about their creative process and then choosing the work for a show. “It’s like you shop but you don’t have to buy anything,” Page noted. He counts himself lucky that Gallery Manager Kirsten Surbey manages “all the stuff that I don’t really know how to handle and kind of don’t want to learn a whole lot about.” 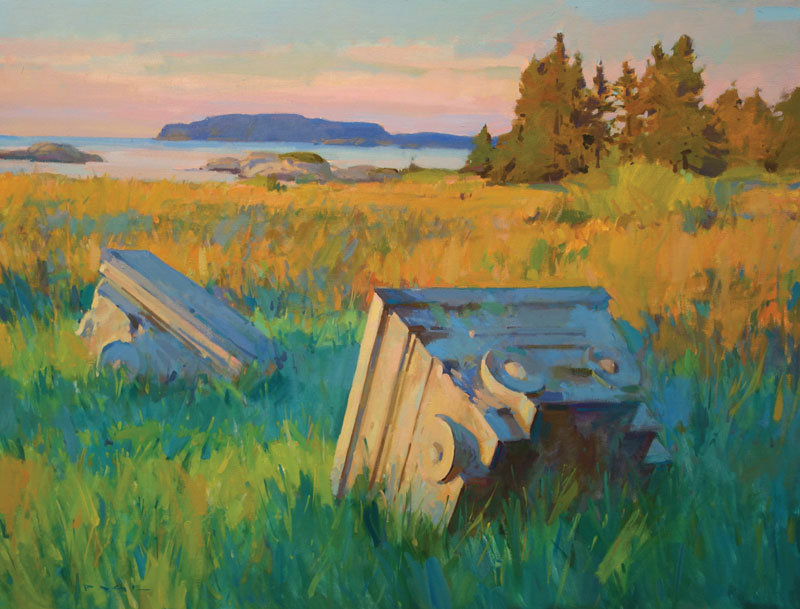 On a visit to Dix Island, Page came across these architectural remnants from an abandoned quarry. “There’s a sense of magic or discovery when you stumble upon something that you don’t expect to be there,” he said. Columns, oil on linen, 36" x 48", 2020.

The COVID-19 pandemic disrupted Page’s life and business, but he made the most of the shutdown. He had some commissions to finish and set up a second studio in the gallery, posting paintings in the front window. At the same time, he explored creative ways to reach out to people. The gallery’s online offerings include a blog that features stay-at-home activities, from instructions for how to make an origami star to a coloring book with images based on Page’s paintings. He also highlights the work of gallery artists, like Simon van de Ven’s vessels, Camille Coleman’s photographs, or Jessica Ives’s oils. An ongoing “Ask an Artist” interview has featured the likes of Siri Beckman, Anneli Skaar, J. T. Gibson, and David Graeme Baker.

The quarantined life has also led to new mediums, including watercolor and linoleum prints, both of which he can delve into with his daughters. There’s a freshness and brightness to the watercolors that makes Page want to make his paintings even cleaner and brighter. “It’s really informative to my studio practice to work on something that I have no plans ever to sell. I can just play with it and mess around,” he said.

Ideally, he said, “we can get back to a summer in Maine where we can have fun receptions and other things going on.” He is buoyed by the thought of sailing out to a Maine island to continue his quest for the sunlit landscape.

In addition to his own gallery, Page is represented by Greenhut Gallery in Portland, Maine, Anglin Smith Gallery in Charleston, South Carolina, and Huse Skelly Gallery in Balboa Island, California.