All photos by Paul Cyr

He clasps the crag with crooked hands;

Close to the sun in lonely lands,

Ring’d with the azure world, he stands.

The wrinkled sea beneath him crawls;

He watches from his mountain walls,

—“The Eagle” by Alfred, Lord Tennyson 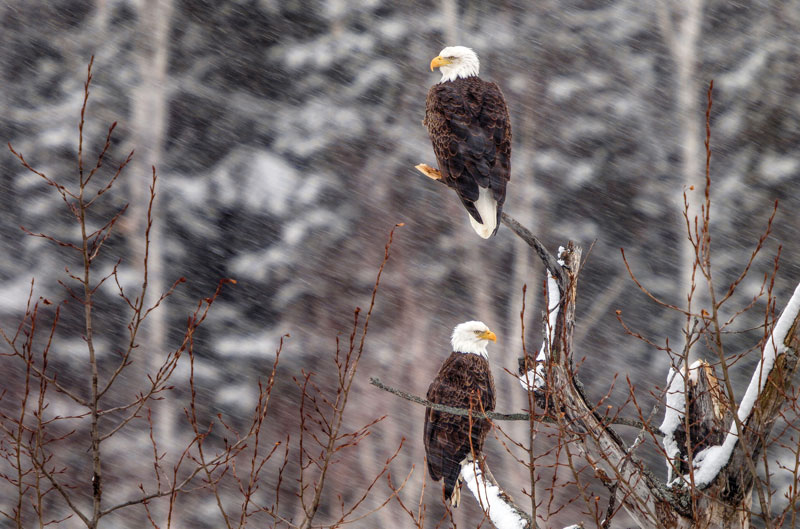 With 7,000 insulating feathers, winter is a piece of cake for eagles. Distinguishing sex is easy, too, when pairs are perched together: females are a third larger than males. In winter, pairs seek open water where food—ducks, gulls, and fish—is available.

From a perch atop a 60-foot black willow snag, an adult female bald eagle scans a half-mile of open water at the confluence of the Sebasticook and Kennebec rivers in Winslow. The willow has been her favorite perch site for several winters, in large part because it’s lit by early morning sunlight and overlooks productive hunting grounds. Elsewhere, the rivers are locked in ice.

Beneath the snag is a mixed flock of black ducks, mallards, common goldeneyes, and common mergansers. Aware of the eagle, the ducks display no fear. They’ve learned to read her body language. And at this moment, the eagle, half asleep with one leg tucked into her breast feathers, is not a threat.

Suddenly, though, gulls and ducks lift off the water in unison, flying wildly in circles, climbing higher with each revolution. The commotion catches the dozing eagle off guard. Fully alert now, she unfolds the hidden leg, grips the limb with bright yellow talons, and tilts her head sideways to scan the dark gray sky. With my 10 x 42 Swarovski binoculars, I strain to see what she and the ducks see but come up empty.

Ducks race upriver past Head of Falls, the Two-Cent Footbridge, and the former Scott Paper Co. mill in Winslow. The gulls climb higher in the sky. They’ve learned that to circle beneath a flying eagle is to court death. Better to be above the raptor. Years of observation have taught me that gulls’ frantic flights signal an eagle’s approach long before it’s visible to human eyes. Moments later, I glimpse a faint, black-and-white speck flying above the ice, about a mile downriver. Growing in size as he approaches, the female’s mate will soon join her on the willow. When they are perched together, distinguishing gender is straightforward: female eagles are a third larger than males. 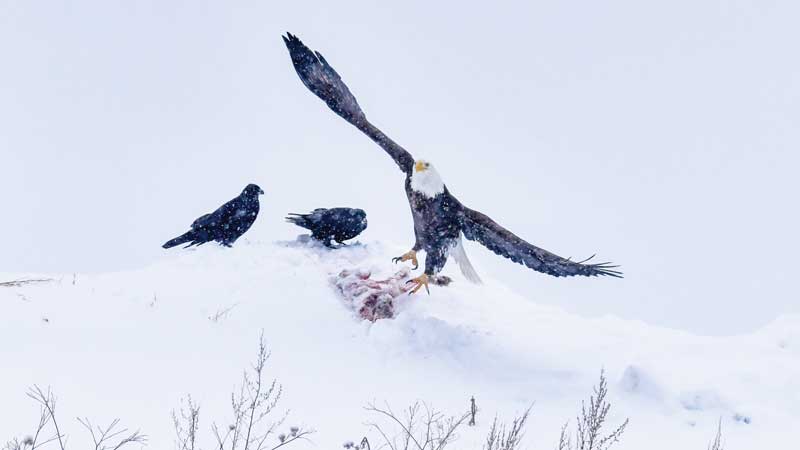 Perching hours before searching for an easy meal, bald eagles are the ultimate “couch potato” of Maine birds. Eagles often watch ravens locate carrion before “pirating” the meal. Weighted down after consuming 4-6 pounds of roadkill, eagles have been killed by vehicles.

A pair of black ducks flying downriver veers wildly when they cross in front of the statuesque birds of prey. Our national bird knows that stealth and patience produce much easier meals.

The waiting game continues. A snow squall blankets the river, limiting visibility to 50 feet. Minutes later, when skies clear, the female alone remains perched. A bitter cold wind kicks up, so she ruffles her feathers to trap air for thermal insulation, then closes one eye and again buries a leg in her breast feathers. Five goldeneyes land in open water near me at the mouth of the Sebasticook River. The eagle briefly opens both eyes before closing them. Chasing spooked ducks would require her to expend great energy and would likely end with no meal. Her patience is remarkable. Bundled in warm clothes, my patience approaches its limit in zero-degree weather.

A flock of ducks lands in open water beneath her, triggering her to shift from one leg to the other. Her concentration intensifies, giving biological meaning to “target fixation”—a term eagle specialists use to describe their subjects’ ability to focus on prey while completely blocking out distractions. Her subtle movements signal the hunt is imminent. Three mergansers—a female and two males—dive for fish and resurface 100 yards upriver of the eagle. The drakes, distracted by their battles courting the hen, commit a grievous mistake. The river’s current delivers the squabbling mergansers to the eagle.

Leaning forward with wings drawn tight, she drops from the perch like a falling anchor. In an extraordinary display, she opens her wings, fans her tail feathers to slow her descent, and then uses her tail as a rudder to mirror the merganser’s underwater maneuvers. Hovering a foot above where the duck will break the water surface to breathe, she displays impeccable skill and timing.

In a millisecond, the merganser’s head pops out of the water and is within the grasp of the eagle’s talons. Death is instant. Carrying the limp carcass, she flies effortlessly back to her favorite perch. The male eagle lands nearby, causing her to crouch and spread her wings to shield the meal from her mate. She’s in no mood to share.

I hear the distant chimes of St. Joseph’s church bell, calling parishioners to 10 a.m. mass. Vehicle horns toot on the Waterville-Winslow bridge, a snowball’s throw from the female eagle. Repositioning the carcass on the limb, she glances indifferently at the traffic, and then tears and swallows chunks of flesh. Plucked merganser feathers drift past four floating herring gulls busily preening their own feathers.

I tuck the binoculars and spotting scope into my birding bag, collapse my tripod, and walk to my vehicle. I’ve observed similar profoundly moving life-and-death scenes many times since my high school student days in 1969, the year my affection for eagles took hold after reading Silent Spring by Rachel Carson. In the 1960s, environmental contaminants—particularly DDT, applied to control spruce budworm, mosquitoes, and potato beetles—wreaked havoc with eagles, reducing Maine’s nesting population to fewer than two dozen pairs. 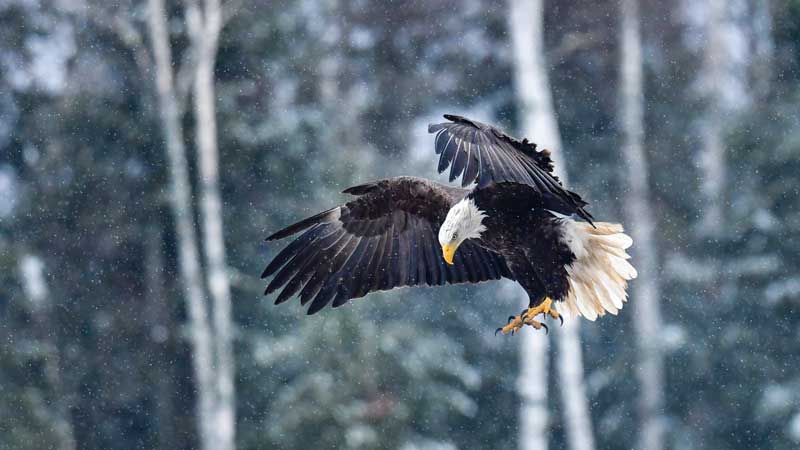 Equipped with 20/4 vision, eagles are able to see four to five times farther than the average human. Our national bird’s survival is further aided by “target fixation”—the ability to completely block out distractions while pursuing a duck or a porpoising fish.

Motivated to help our national bird, I started a feeding station for wintering eagles on the Kennebec below Waterville’s Hathaway shirt factory. A local fur trapper donated dozens of beaver and muskrat carcasses—choice eagle food—which I loaded onto a toboggan and dumped on the ice. From a blind I had constructed on the shoreline, I enjoyed many hours of wildlife observations, including a favorite—two river otters feeding on a carcass while being dive bombed by a pair of adult eagles.

Now at age 68, I’m still awed by eagles. Following the banning of DDT in 1972, Maine’s eagle population began a slow and steady climb back from the brink of extirpation. Today, an estimated 800 pairs nest in Maine, repopulating former breeding territories in every region of the state. Their resurgence is one of our greatest wildlife success stories, leading to the removal of eagles from the federal endangered list in 2007, and from Maine’s state list in 2009.  Although eagles are much more common now than when I first started watching them, the sight of one is still thrilling.