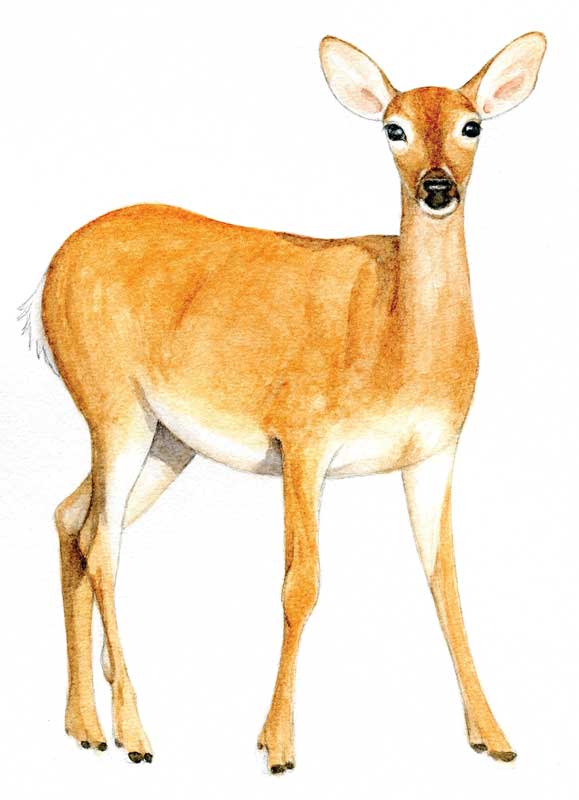 Big moon tides do more than wash away the wrack and flotsam hibernating on Maine’s beaches and backwaters. Sometimes, they impact the lives of creatures—both four-legged and two—who normally live away from the saltwater world. This point was driven home for me one late spring day not too long ago.

It started with a weird sound coming from the woods at the edge of the nearby salt marsh. At first, it sounded like a crow with a bad cold. But there are always weird sounds at the edge of a salt marsh, something my wife and I have learned in 40 years of living at the saltwater margins. Still, after trying to ignore it, I went to investigate.

With that emphatic cry to guide me, it didn’t take long to spot a somewhat wobbly fawn staggering around the parched, rotted stumps and empty vernal pools of the acres east of our home.

Of course, before getting anywhere near the fawn, I scanned around for the mother, or any sign of her. I’ve lived in rural Maine long enough to know wild creatures, especially deer, frequently leave their new offspring to forage for food. Mother might still be nearby.

Looking around was easy because the piece of land on which the fawn was wandering is nearly surrounded by open terrain: There is the extensive salt marsh to the south and east; a big hay field to the north; and our house on a hill in the woods to the west. Finding a nursing doe’s tracks should have been easy. Trouble was, there were no recent tracks, just some obviously older tracks that stopped at the edge of the salt marsh, heading southeast into the muck and mire.

With the tide coming in that morning, the doe’s return across a submerged, sticky, no-man’s-land of salt marsh, in broad daylight, seemed unlikely. So I walked a little closer to see what was the problem with the fawn. Approaching it was a noisy business, with dry leaves and sticks cracking beneath my feet. Hearing me closing in, Bambi seemed unconcerned. In fact, as I got near, it seemed to submit to its fate, and just lay down. It was perfectly subdued as I bent over to have a look.

Considering the recent dry weather, it was no surprise to see the fawn looking very thirsty, licking its lips and making a smacking noise between bleats. I decided taking it to drinking water was a better option than bringing water to it. Besides, with all the racket it had been creating, it seemed only a matter of time before a resident coyote, fox, eagle or other predator showed up for a quick lunch.

After a drink of water behind our barn, the fawn perked up a bit. So I called the Maine Department of Inland Fisheries & Wildlife to ask what to do. “You should have left it right where it was,” an unhappy IF&W official told me. “That doe will never come back now.”

Actually, I later found out it’s a matter of considerable debate whether or not human scent on a newborn deer will dissuade its mother from its maternal duties. But some experts, like my first contact at IF&W, insist the course of nature should never be altered, regardless of the fate of the newborn in question.

Still, I was in for a pound, not a penny. And maybe I’m just a sucker and softy. Whatever the case, I cobbled together a makeshift holding pen, while my wife Melissa tracked down the local IF&W game warden. Although it was a weekend and he was currently 20 miles away working on another project, he agreed to pick up our surprise visitor as soon as he could get back to Arrowsic. “But make sure you don’t feed it anything,” he advised in a decidedly more gentle, caring voice. “They have very delicate stomachs at this stage in their lives. Anything other than fresh water could make it sick and die.”

Like stranded seals, whales, eagle chicks, squirrels, and a host of other critters, there is a very precise rehabilitation protocol for dealing with any orphan at the ocean’s edges. What applied to our cast-off fawn doesn’t necessarily apply to any other abandoned critter. When the game warden did arrive, he told us about the various rehabilitation “farms” around Maine (there are about a half dozen) that deal with everything from stranded seal pups to bear cubs and forgotten fawns. Funded only by private donations and volunteer enthusiasm, they are the last chance for Bambi and many others.

In all cases, though, the goal is to get the orphan back into natural habitat, on its own, as soon as possible. After the warden took it to a rehab farm, we decided to keep track of the fawn. It grew on the rehab farm during the summer and made it back into the wilds by autumn. And fortunately, it was released far away from an area where big, lunar-induced tides could have any impact on it again. Sometimes, saltwater and fur just don’t mix.