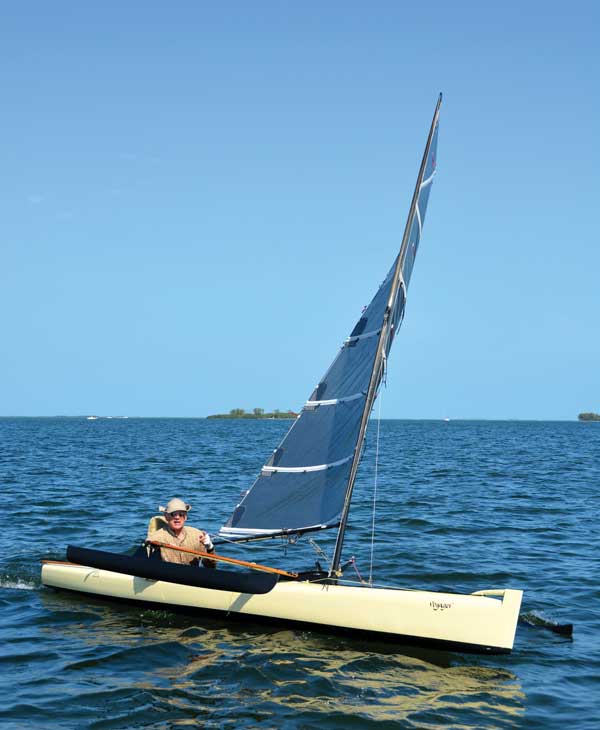 Meade Gougeon on Voyager, which he sailed to victory in the 2014 Everglades Challenge. Courtesy Gougeon Brothers Inc.

Boatbuilding innovator and inspiration Meade Gougeon passed away this summer at age 78, just months after he won one of the most grueling sailboat races in the country—the 300-mile-long Everglades Challenge. He sailed the race in a one-man wooden sailing canoe of his own design and build that he named Elderly Care. This final race summed up so much of his life: a cutting-edge beautiful boat, competition, and a sense of humor. He will be missed.

Meade and his brother Jan, (who predeceased him), forever altered boatbuilding with the introduction of their epoxy resins and ensuing evolutionary technologies surrounding them. The wooden boat renaissance owes so much to these brothers. No one ever will be able to count the many thousands of boatbuilders, home repairers, and sculptors who used the Gougeon WEST SYSTEM brand of epoxies. In my shop, I call it “boatbuilder in a can.”

I met Meade at his shop in Bay City, Michigan, in 1976, right after I began working for WoodenBoat magazine. From the beginning he was always quite willing to share what he knew, and—beyond the technological advances—this was the secret to his success.

Years later, Meade came sailing with me and my wife Polly on her 85-year-old knockabout. Although he was an ice boater and a multihull sailor and was used to going fast, he had a big grin on his face as he sailed upwind with us at five knots. That was classic Meade. He lived his life spreading joy, one boat, and one project, at a time. —JKH

“The wind is coming up. Tell the boys they can commence with the race.” Fittingly, these would be the last words of Meade A. Gougeon as he watched a fleet of sailboats, including his trimaran Adagio, assembling for the Great Lakes Multihull Regatta in front of his home on the Saginaw Bay. Gougeon died Sunday, August 27, 2017, peacefully at home surrounded by his family. He was 78 years old.

Meade, along with his brothers Jan and Joel, founded Gougeon Brothers, Inc. in 1969. Their employee-owned, ISO 9001 registered company is a world renowned formulator and manufacturer of WEST SYSTEM® and PRO-SET® epoxies. The brothers pioneered the use of epoxy in boat construction and repair. They got their start building DN class iceboats with wood and epoxy. Initially, the brothers obtained access to Dow Chemical’s nearby laboratories to develop an epoxy that could be used for coating and bonding.

By 1973, the brothers’ small boat shop in Bay City, Michigan was the largest builder of iceboats in the United States. Even so, in 1974 they sold the DN portion of their business to focus on soft water boats and their burgeoning epoxy business.

In 1971, Meade launched Adagio—the first large, all epoxy bonded and sealed wooden boat built without the use of fasteners. He’d built her with his brother Jan in just six months. She’s been sailing on the Great Lakes ever since, winning the Bayview Mackinac Race in 2000, 2002, 2006, 2016 and 2017. Adagio is proof that fully bonded monocoque structures can be built not just to last, but to be serious competitors for generations.

In 1979, Meade wrote The Gougeon Brothers on Boat Construction. This famous boatbuilding guide details composite construction techniques using wood and epoxy. It remains a favorite resource for professionals and first-time boat builders, and is often used as a textbook in boat building programs.

A few of the notable wood-epoxy boats built by GBI, include the Ron Holland-designed two-ton monohull Golden Dazy which won the 1975 Canada’s Cup; the 60′ Dick Newick designed trimaran Rogue Wave; the Georg Thomas-designed proa Slingshot which was clocked at speeds of over 40 MPH; Adrenalin, a Formula 40 trimaran of wood, epoxy, and carbon fiber; the Gougeon 32 production catamarans including Incognito, which, skippered by Russell Brown, finished first in the solo class in this year’s Race to Alaska.

Meade was an avid multihull sailor, ice boater, and cyclist. Aboard the outrigger canoes Voyager and Elderly Care respectively, he placed first in his class in the grueling, 300-mile Everglades Challenge in 2014 and 2017. He raced iceboats with the International DN Ice Yacht Racing Association for several decades, winning the US Championship in 1981 and 1997. He was inducted, along with his brother Jan, into to National Sailing Hall of Fame in 2015.

Adamant that GBI should remain a robust corporation in his absence, Meade went to great lengths to assure that the next generation of management and employees were smart, hardworking, and forward-looking individuals. Because he laid the groundwork for his succession, the company remains strong as the leader in the epoxy industry.

The oldest of four children, he was born September 25, 1938 to Meade and Elizabeth “Betty” Gougeon. After graduating from T.L. Handy High School, Meade earned a degree in Industrial Management from Western Michigan University in 1960. He served honorably in the U.S. Army.

Meade is survived by his beloved wife of 46 years, Janet Gougeon and their children and spouses: Glenn Kirkland; Anne Michelle and Randy Mortensen; M. Ryan and Janice Gougeon; Benjamin and Logan Gougeon; Renee and Alan Gurski; Mia and Kwafo Adarkwa; Jae Gougeon; and Laura Gougeon, as well as 14 grandchildren. He is also survived by his brother Joel (Kaye) Gougeon.