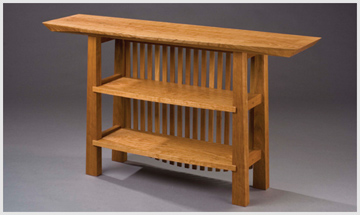 Richard L. Bernhard “Library Table”, 2005. Cherry wood, 32 x 56 x 16,
Used here courtesy the Portland Museum of Artphoto by Jim Dugan
“Getting Personal,” an exhibit at the Portland Museum of Art, explored the relationship between craft and design by pairing contemporary furniture makers with architects. Twelve individuals or teams of architects contributed 15 pieces to the exhibition, which runs from June 2 through August 26, 2007. In “Getting Personal,” architects who either practice in Maine or have done significant projects in Maine were asked to create furniture expressive of their personal design visions. They presented sketches of their designs and, when possible, commissioned Maine artisans to build their pieces. There were no limits placed on materials or degree of functionality. 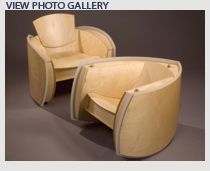 View a gallery of selected pieces
The resulting collaboration not only expressed the personal aesthetics of the architect, but also explored the limits of materials. In many cases, the projects became journeys of collaboration between architect and artisan as each explored the conflicts and synergies among design, materials, and craftsmanship. The original sketches will be presented along with the final executed designs to map the path from idea to object in a variety of materials including wood, concrete, and steel. According to the museum, the relationship between furniture design and architecture is longstanding and intimate. Over the course of the twentieth century, architects of note, such as Frank Lloyd Wright, Mies van der Rohe, and Eero Saarinen turned their hand to designing furniture. “Getting Personal” will be shown in conjunction with another at the museum, titled “Frank Lloyd Wright and the House Beautiful,” on view June 28 to October 8, 2007. The pairing was intentional, since Wright was known for his attention to interior details as well as for his buildings themselves.
Roll over numbers to view thumbnails