For 17 years, scientists at Bigelow Laboratory for Ocean Sciences have been monitoring the microbial life and other conditions in the Gulf of Maine. Their efforts got a boost in 2015 with the delivery of a new unmanned submersible named Grampus.

The 4'11"-long torpedo-shaped glider sub is designed to go back and forth across the Gulf of Maine for about 23 days at a time, collecting data. Grampus joins the lab’s other unmanned submersible, Henry, named for Henry Bryant Bigelow, the founding director of the Woods Hole Oceanographic Institution (and Bigelow Laboratory’s namesake). Grampus was the name of Henry Bigelow’s first research schooner.

While the scientists at Bigelow Laboratory do use big research vessels, the smaller unmanned subs are a much cheaper way to gather data, said Dr. William “Barney” Balch, a senior scientist at the lab. A trip on a research ship can cost over $10,000 a day, while the entire cost of Grampus was about $175,000 (the equivalent of about 17.5 days at sea). Grampus can stay out up to four weeks on one set of batteries. 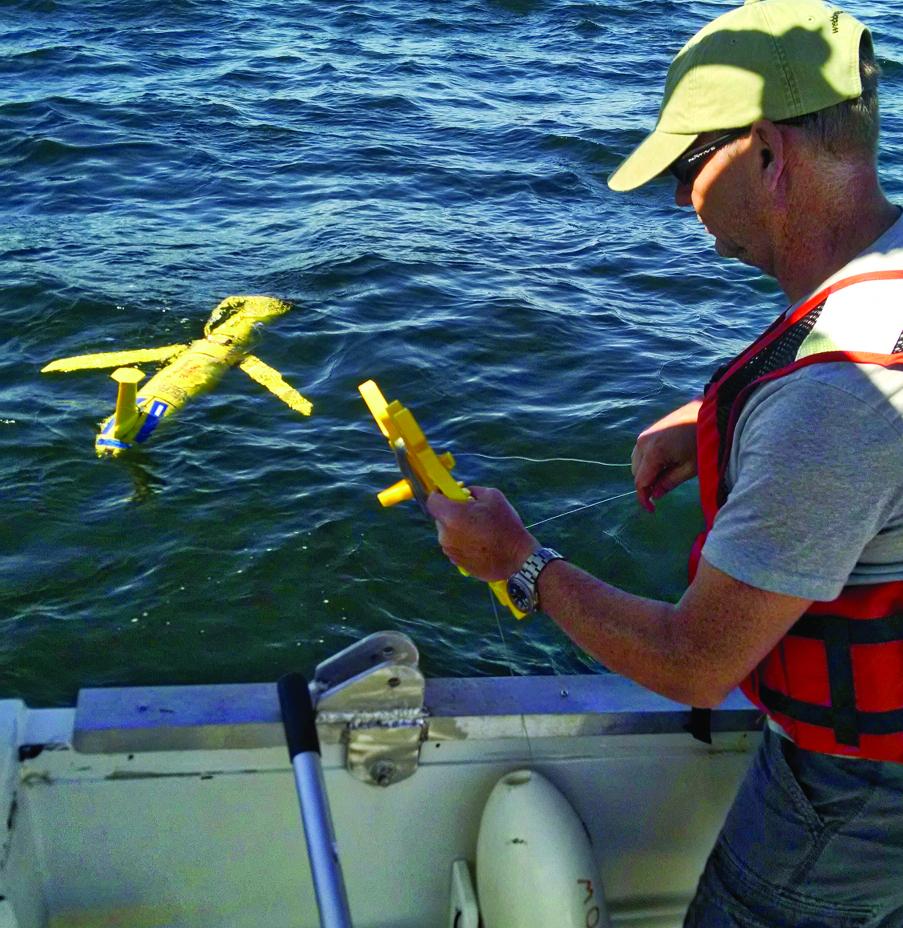 Like Grampus, Henry, also an unmanned Slocum Glider, makes long research trips across the Gulf of Maine. Here, Henry is being released at sea. Photo courtesy Bigelow Laboratory for Ocean Sciences The sub is small and meant to travel long distances without stopping, and speed is not an issue, so Grampus is not powered by a propeller or traditional engine. Rather, it moves forward thanks to shifts in buoyancy and a system similar to the old-fashioned Cartesian diving bell toys. The glider is ballasted to be neutrally buoyant. A small pump moves a small amount of oil in and out of an external bladder to adjust the buoyancy. When the bladder is filled, it makes the volume of the glider larger so it displaces more water, which increases buoyancy; when the oil is removed from the bladder (back into the glider), the volume is reduced, displacement decreases, and the glider sinks. As the bladder fills and empties, the sub goes up and down and slowly glides forward—thanks to its wings—at an average speed of half a knot. A battery pack powers all the internal systems, including GPS, computer, compass, and all communications. Grampus contains all sorts of sensors that take readings on light, salinity, water temperature, organic matter, and more. It samples the water around it an average of once per second.

“We’re trying to understand how the Gulf of Maine is changing through time,” Balch said.

In addition to readings used by Bigelow Laboratory scientists, the results are used by NASA to back up its satellite measurements of ocean color.

While at sea, Grampus surfaces every six hours to send data back to the lab via satellite (using an Iridium phone modem); an air bladder in its tail inflates to lift the tail out of the water enough to send and receive signals. The sub gives its position, its course, and reports on whether it has any leaks, then it goes back under water.

The two glider subs make four cross-Gulf trips each year between them. Balch said neither Henry nor Grampus have been terminally damaged by surface encounters. But last summer, while 90 miles offshore and 360 feet down, Henry’s rudder was knocked off and the tail bent. “We think a surfacing sea creature may have hit it from behind,” Balch said. The glider came up, called home, and then maintained its position as best it could until a rescue boat could reach it.

Grampus headed out on its maiden voyage across the Gulf of Maine this past October. If you are out there and happen to see a small yellow submarine surface nearby, don’t be alarmed. It’s just Grampus, calling home.