Stop by Bar Harbor artist Melita Westerlund’s warehouse studio and you will find her wearing industrial protective gear and wielding industrial power tools. The final results of her work are far from industrial, though.

Westerlund’s bright abstract sculptures in aluminum, steel, bronze, and stone, occasionally combined with woodwork, range in style from voluptuous to precisely linear, and in size from tabletop pieces to room-sized public commissions and kinetic works for indoor and outdoor sites. She periodically shifts gears to create hand-cast paper or three-dimensional fiber art pulped and dyed to work like clay. Her motifs are reminiscent, in turn, of Henri Matisse’s paper cutouts, Alberto Giacometti’s attenuated sculptures, and African tribal masks—bursts of color and celebrations of free-flowing forms. 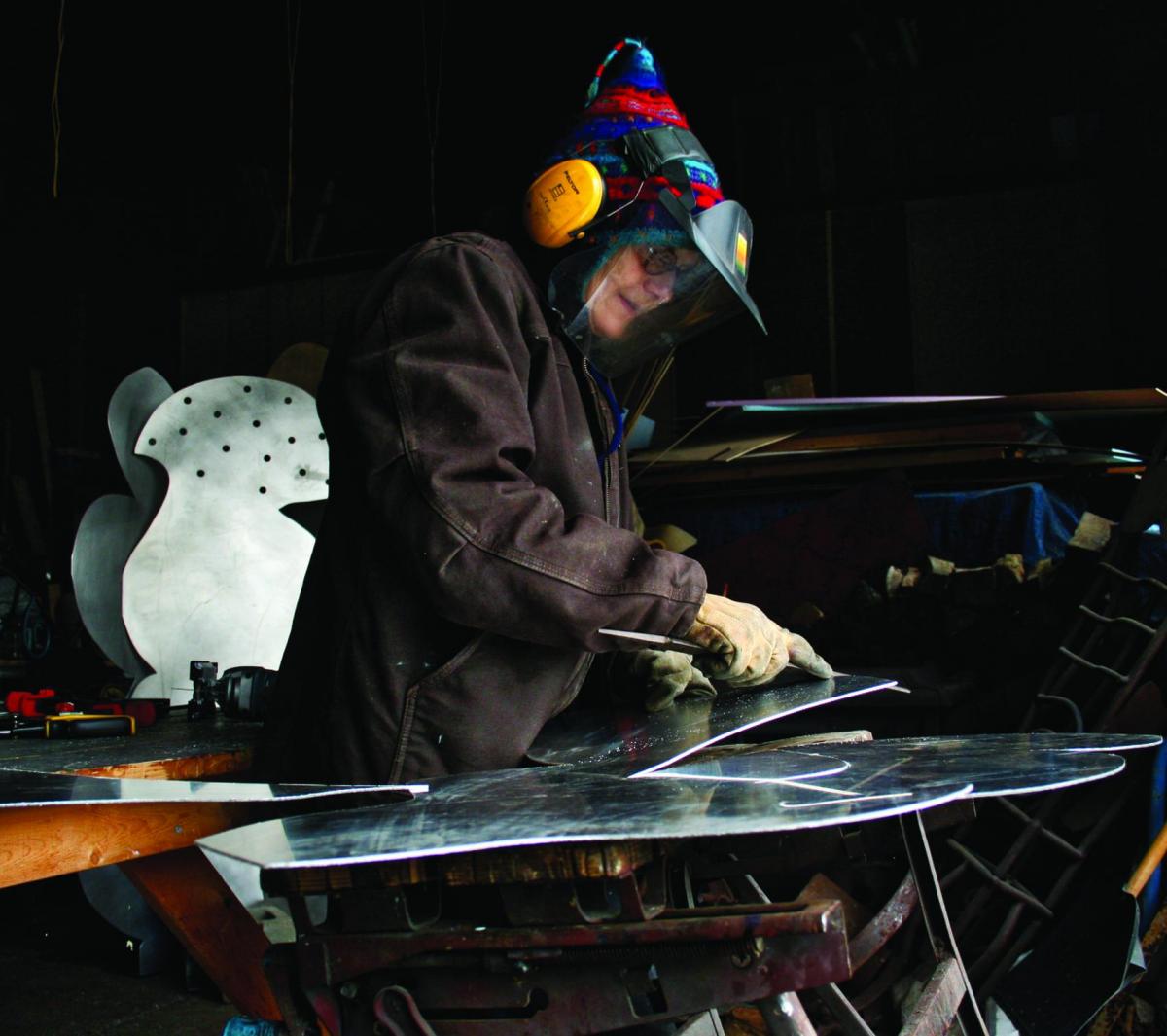 Melita Westerlund works on a large aluminum sculpture at her cavernous Bar Harbor studio, a 19th century brick warehouse that was once an electric power plant. Photo by Laurie Schreiber 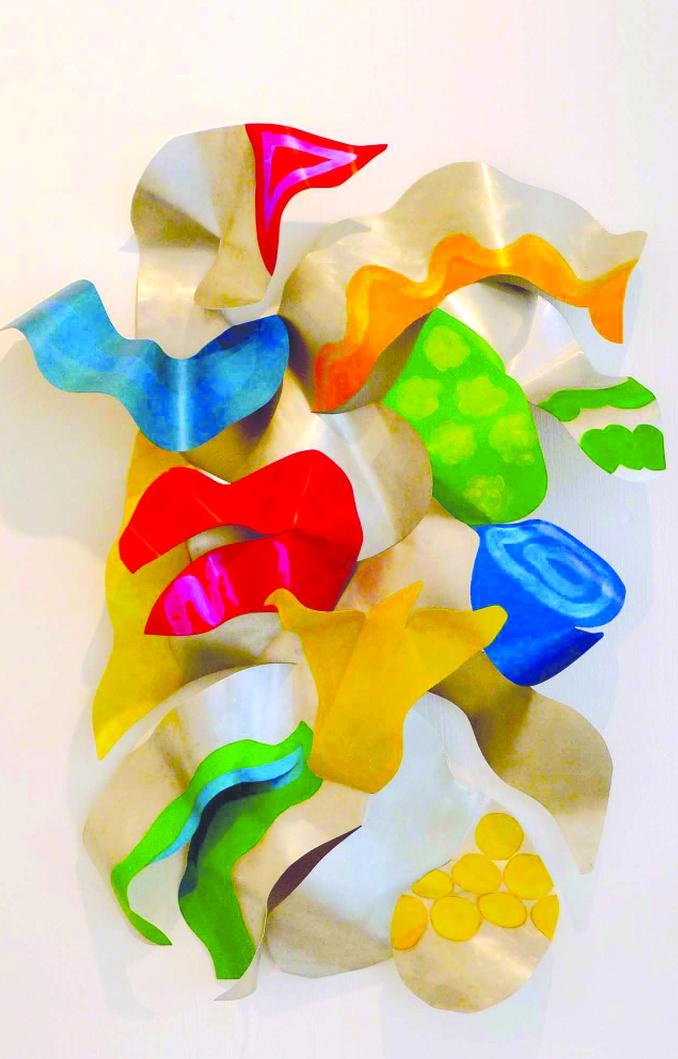 Born and raised in Finland, Westerlund has an affinity for bright colors. This is Early Spring, 2013, aluminum and paint, 4' x 2'6" x 12'. Photo by Stewart Brecher When she creates one of her signature aluminum sculptures she gears up in steel-toed boots, canvas jacket and pants, leather gloves, and a welder’s helmet and ear protectors layered over a knitted Lapp cap whose patterns reflect her native Finnish love of color. And she wields a powered metal saw that can screech through thick aluminum sheets.

As piles of metal filings accumulate on the floor, she cuts sinuous shapes—like petals, or folds of flesh, or giant mushrooms. Recently she was working on a six-foot sculpture. Strategically flexed, hole-punched, bolted, and painted in “park green” and “ocean blue,” the work manifested Westerlund’s twin drives to struggle with the elements of sculpture and transform them organically into bold constructions that are surprising and playful—“a little bit crazy and a little bit passionate,” she said.

“There’s something about the tension in physical involvement,” she said. “I like struggling with the elements, struggling to hold different things together.”

For more than two decades, Westerlund has worked in a studio in an enormous 19th century brick warehouse that was once an electric power plant. The cavernous space is packed wall-to-ceiling with hand tools, power equipment, raw sheets of metal, palettes of fiber, buckets of dye, paints, finishes, come-alongs, welding masks, fire extinguishers, clamps, fastenings, stacks of lumber, and artwork in various stages of completion. 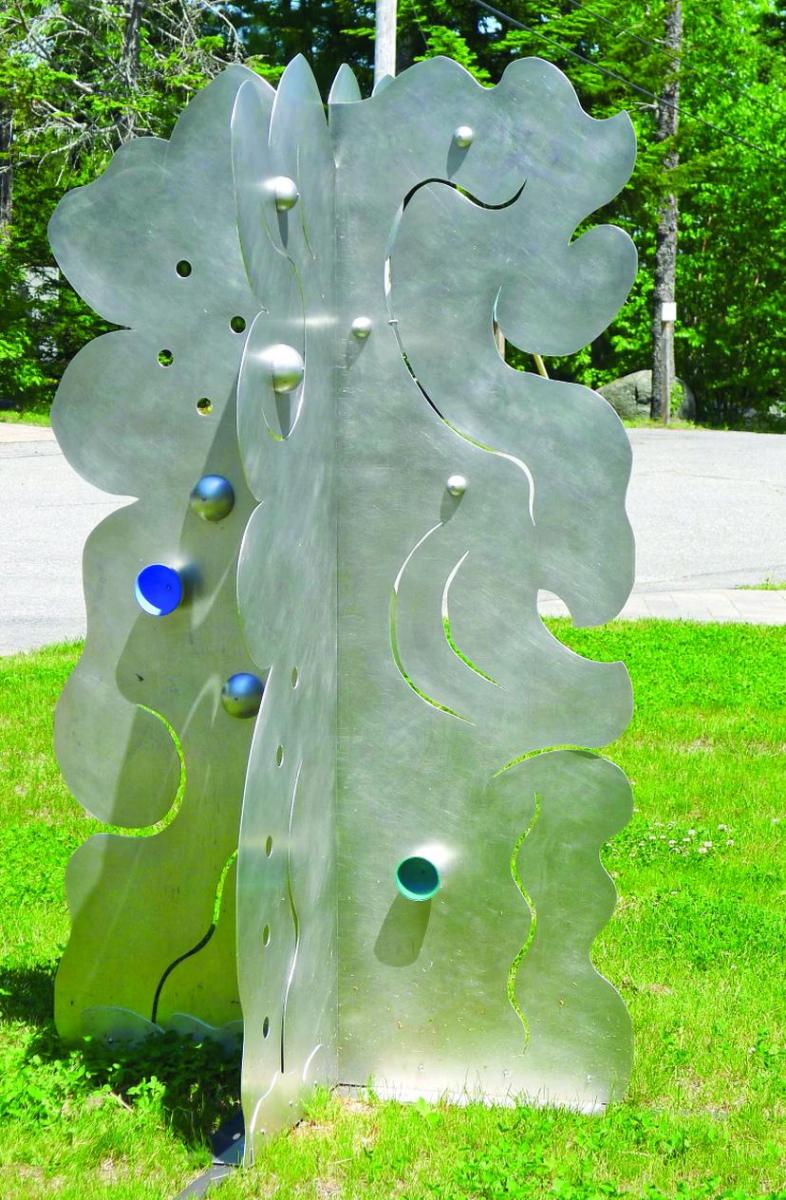 Westerlund’s work ranges in size from small table-top pieces to large works meant for outdoor display. This is How Oceans Evolve, aluminum, 2014, 80" x 47" x 47". Photo by Stewart Brecher One of her favorite tools is a plasma cutter.

“It burns into steel and creates these very linear forms,” she said. “It’s like drawing in steel.”

Westerlund’s sensibility is rooted in the traditional arts of her native Finland and extended stays in Kenya. But her lively repertoire is muscular, a take-no-prisoners approach that molds materials to a fantastical vision.

Born and raised in Helsinki, Finland, she grew up with an affinity for bright colors, an antidote to the country’s long, dark winters. As a child, she began to feel that art had special meaning for her, as she discovered art with her sister, also an artist.

“I remember going to museums with her, in Helsinki, when we were maybe 14 years old, and discovering these amazing Finnish artists. At the time, we didn’t know much about American art until the art magazines started to come from America to Europe. That opened up the doors to influence from outside art.”

They were particularly attracted to the subjective emotionalism and experimentation of early-twentieth-century French expressionism. But one of their most powerful influences was their mother, who is now in her 90s and lives in Helsinki.

Mask, steel, paint, 1988, 69" x 25" x 13" was inspired by African tribal masks. Westerlund lived in Kenya for three years. Photo by Stewart Brecher “She was a stay-at-home mom for a long time, but she could have been a really wonderful artist if she had grown up in a different period,” said Westerlund. “She grew up during the war and didn’t have the opportunity to do anything nontraditional. But she was very creative in sewing and knitting and making things for the home. She has an amazing sense of color and design.”

Westerlund traveled to Tunisia to study painting and drawing at L’Ecole Des Beaux Arts, then returned to Helsinki to attend the Free Art School. Eventually, she and a friend, deciding it was time to study elsewhere, hitchhiked to Barcelona. It was the early 1970s and they were teens, happy to crash in an apartment belonging to the parents of a new friend and to accept canvas and paints from another new friend. When they ran out of money, they returned to Helsinki, where Westerlund enrolled in the University of Arts and Design to study design.

Figurative studies, as opposed to abstract studies, was the only option at the time.

“We worked a lot in plaster and clay and wax, working with form and proportions,” she said. “That was the traditional way of getting involved with sculpture—understanding the human body.”

With a foundation in technique and materials, she began finding her own vision. She met Stewart Brecher when he came to Finland to explore the country’s architecture, moved to London to live with him, and eventually the two were married. They celebrated their 42nd wedding anniversary in 2016.

When Brecher received an appointment to teach at the University of Nairobi, the family, by then including a baby, moved from London to Kenya. Over the next three years Westerlund’s art blossomed, inspired by lively colors and forms of the country’s traditional batik art. Her first show there featured large wall hangings that presaged her future work and led to her first commission, a lobby mural at the National Bank of Kenya. 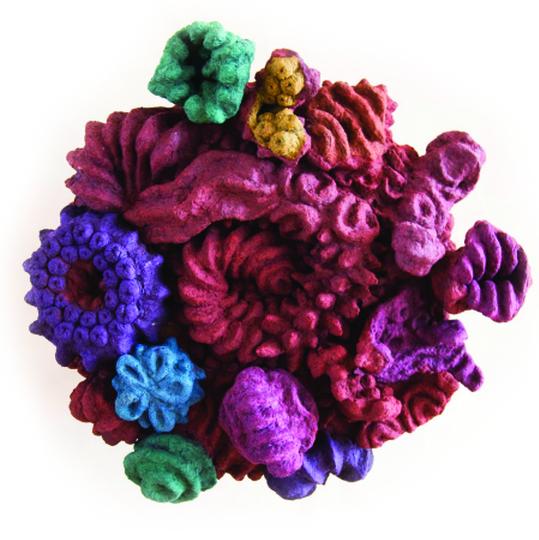 A recent series created from recycled fibers was motivated by the increasingly fragile state of the world’s coral reefs. This is Koralli Saari (Red Coral), cotton fiber, mesh 2010, 30" x 30" x 15". Photo by Stewart Brecher When the family moved to New York, Westerlund earned an MFA in Sculpture from SUNY Buffalo. In 1982, they settled in Bar Harbor, where Brecher works as an architect. Westerlund has been working nonstop since then, exhibiting in museums and galleries in New England, New York, Finland, and Kenya, and completing 16 public commissions in schools around the state under the Maine Arts Commission’s Percent for Art program. She has studios both in Bar Harbor and Finland, where she travels every summer to visit family.

Westerlund considers her creativity a work in progress. She lets loose with organic expressions of her inner self that are as much of a discovery for herself as they will be for viewers.

“You just play around,” she said. “And this playfulness will become something worth pursuing or developing. You discover the right material that can become the expression for your thoughts. When you start, it’s all unknown. But as you work on it, your mind is constantly involved, and the work evolves naturally—‘Oh, of course! This is how it should be done!’”

Westerlund is represented in Maine by June LaComb Sculpture, and in Helsinki, Finland by Pirkko-Liisa Topelius Gallery.