Marguerite Robichaux immerses herself in the landscape 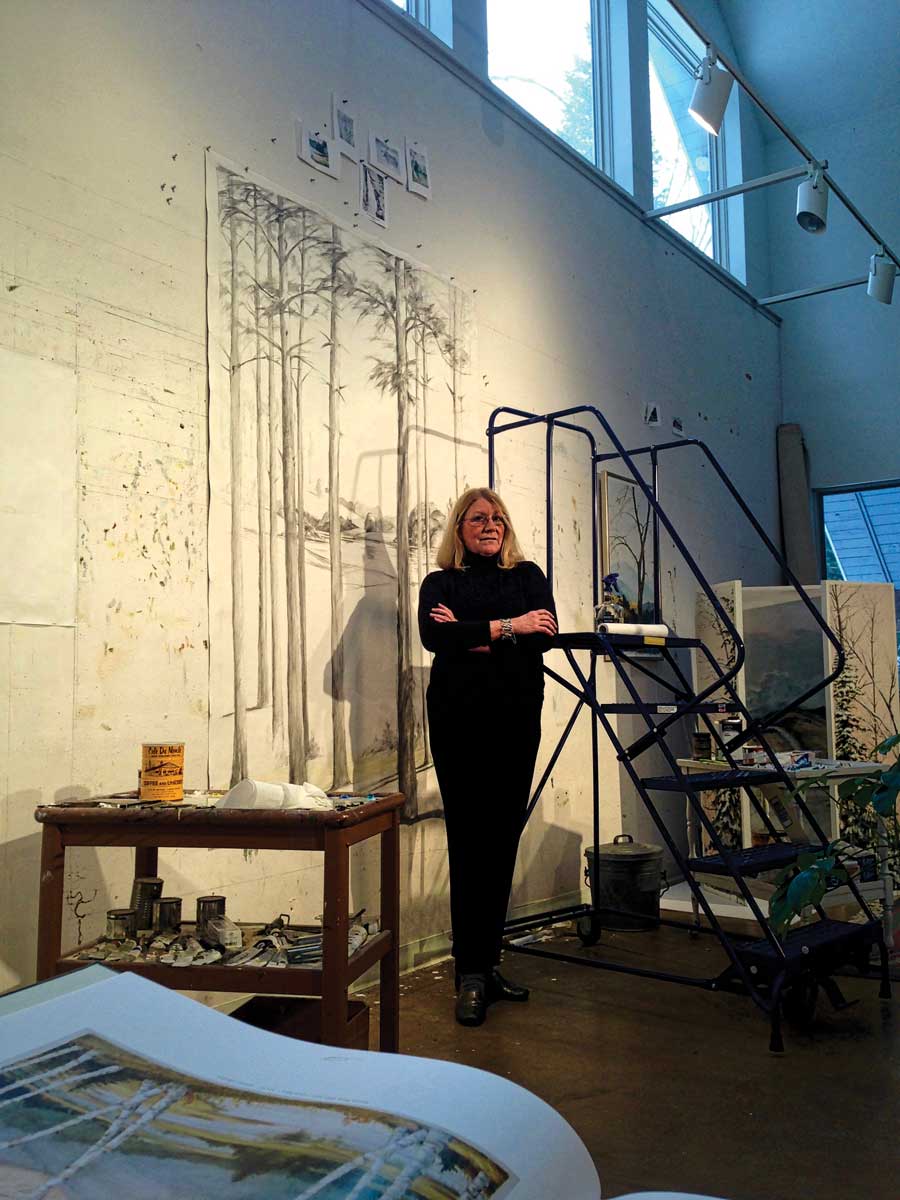 Marguerite Robichaux, shown here in her studio in Stratton, collaborated with architect Sam Van Dam on the design of the studio and her home, which overlook the Dead River in western Maine. Photo by Elizabeth Peavey.

Flagstaff Lake in Western Maine was created in 1949 when Central Maine Power built the Long Falls Dam on the Dead River. The 27-square-mile lake wraps around the Bigelow Mountain Range, while bridging Somerset and Franklin counties. This vast lake, and bodies of water in general, are an inspiration for painter Marguerite Robichaux.

Since arriving in this neck of the Maine woods in the mid-1970s, the Alabama-born, Baton Rouge-raised painter has spent countless hours canoeing and boating the lake’s length and breadth. As a seasoned fly fisher she knows where to find the fish, and has a favorite “honey hole.” She also spends time along the nearby Carrabasset and Dead rivers, and often combines painting and fishing trips, packing her French easel as well as her fly rod. She’ll fish in the morning and paint in the middle of the day, “when the fishing isn’t very good.” 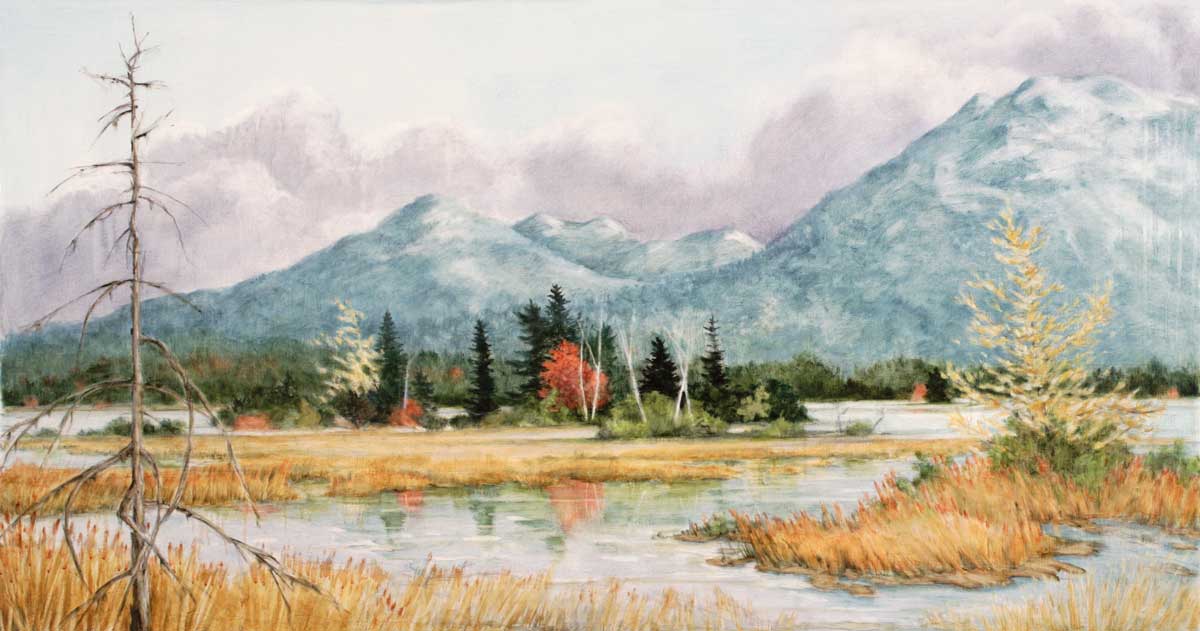 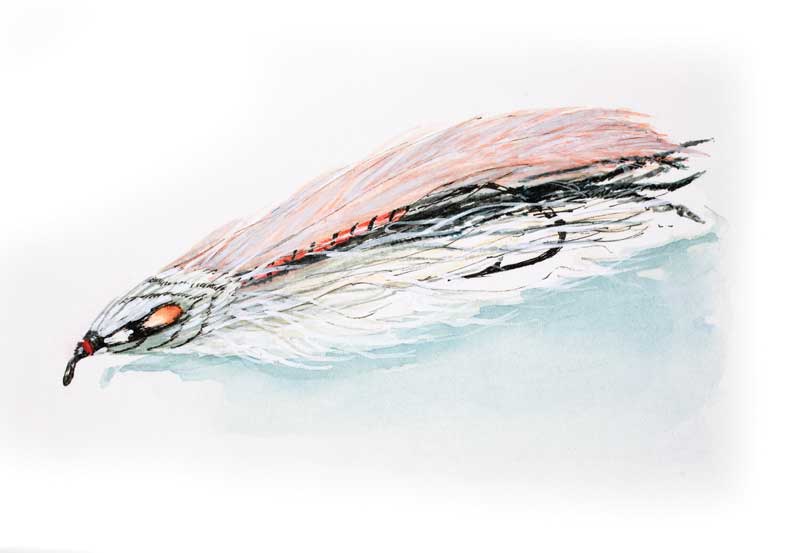 The art of fly-tying gets its due. Grey Ghost, 2005, watercolor, gouache and ink on paper, 3" x 4 ¼". Water has been a vital element in Robichaux’s work. She has painted around lakes across Maine, from Rangeley in the west to Ambajejus near Mount Katahdin and Sysladobsis in Washington County. About eight years ago, she turned her attention to waterfalls, but today she is back to still surfaces. The focus on water aligns with Robichaux’s signature “drip” technique whereby she allows her favored medium, oil paint thinned with turpentine, to run here and there. These visual drips are a reminder to viewers that she is not out to reproduce her surroundings in exact detail.

“Robichaux makes sure we see the hand of the artist at work,” observed her friend, writer Elizabeth Peavey, “reminding us that we are not looking at nature; we are looking at a painting.”

Watercolor was Robichaux’s first love; she dabbled with acrylic while in college, but didn’t like it. For a large oil she will make a “pretty complete” graphite drawing for compositional guidance. She will start applying paint thinly, transparently, and then build up the tones. She doesn’t work wet on wet, but rather uses a fast-drying medium so that she can work the surface of a painting one day, and go back into it right away the next day.

Robichaux is a purist. She edits her landscapes, removing telephone wires, trailers, old cars and the like. “If I see something I really like and it has houses in it, I just take them out,” she said. She does sketches in watercolor en plein air and then comes back to her studio to work them up into paintings. She also takes a lot of photographs. “They’re not taken to be good photographs,” she explained, “they’re taken to remind me of the palette, the atmosphere.”

Over the years, Robichaux’s painting territory has spanned the globe. She has made a number of trips to Ireland, to the Dingle Peninsula where her former dealer, Ray Farrell, and his wife, Marilyn, live. She spent a summer in Peru helping a friend with an art program for children. A grant from Earthwatch took her to New Zealand. In 2010 her work was shown in the U.S. Embassy in the Republic of The Gambia as part of the Art in the Embassies program. 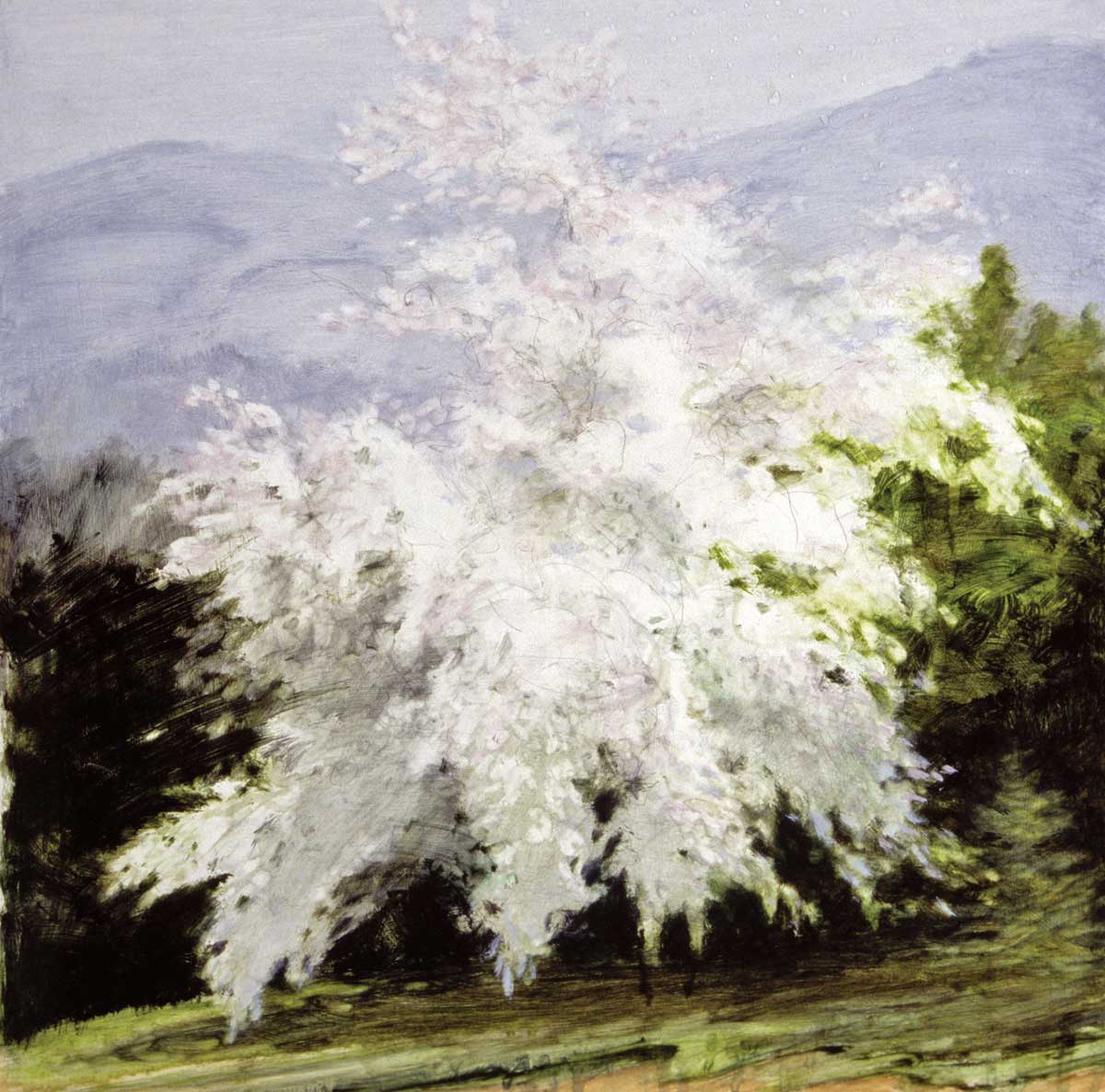 I caught up with the artist in late January in Rockport. Robichaux, who is on the board of the Monhegan Artists’ Residency, had traveled to the coast to hear the 2016 residents share their experiences on the island. An alum of the program, Robichaux spent six weeks on Monhegan in 1990. For our lunch the painter had made muffuletta sandwiches, a reflection of her long-time ties to Louisiana, where she was raised from age two. (Her maiden name is Payne. She married Andre Robichaux when she was 21 and kept his name when they divorced because, she explains, “It’s got more music to it.”)

While attending Louisiana State University, Robichaux met painter Tom Cavanaugh. On his summers off from teaching, Cavanaugh ran the Bay Street Studio, an inn/art supply store in Boothbay Harbor. She worked for him for several years, catching the Maine bug while learning from a master colorist—and, not incidentally, a master martini-maker.

After earning her MFA at LSU in 1974, Robichaux returned to Boothbay to work for Cavanaugh. There she took up with Jud Strunk, a musician, singer/ songwriter, and comedian who gained fame through hit songs like Daisy a Day (which he performed on Johnny Carson’s show) and as a regular on Rowan & Martin’s Laugh-In. For a couple of years Robichaux traveled with Strunk and his rag-tag band across the country in a 1962 Cadillac limousine. The singer’s son Joel, all of 14 at the time, taught her how to fly fish.

Strunk had family ties to Eustis, Maine—his music and humor sketches often referenced locales in the region. After he died in a tragic plane crash in 1981, Robichaux left Maine for a time, but soon returned, missing her northern home. She met Walter Hurley, the love of her life, at Sugarloaf, and in 1994, built her dream house on 25 acres along the South Branch of the Dead River in Stratton. Having taken enough architecture in school to make herself “dangerous,” Robichaux worked with Sam Van Dam in Portland on the plans for a year before starting to build. Her house features a large studio with a 32-foot-high ceiling, and cypress doors that she brought from Louisiana. Her sweat equity included sanding and urethaning every piece of wood. “I figured that was my painting for that year,” she recalled with a smile.

Robichaux never fully left Baton Rouge; after her mother, Gladys Cunningham Payne, died in 1989, she held onto the family house and makes yearly trips home to paint. Once driving her mother through Stratton to show her the land she had bought, Robichaux looked over to see tears in her eyes. “This looks like southern Mississippi,” her mother said. The village reminded her of the little town she had grown up in but which had “died around her.”

Robichaux’s life in her adopted home is recounted in a handsome coffee table book, Glorious Slow Going: Maine Stories of Art, Adventure and Friendship (2011), which she illustrated and co-authored with Elizabeth Peavey. The two met when the latter was asked to write a story about the painter and her home. They bonded over beer and martinis, and proceeded, in Peavey’s words, to “just roam and ramble, brake and gawk, detour and dead-end, as though we didn’t have a commitment in the world.” 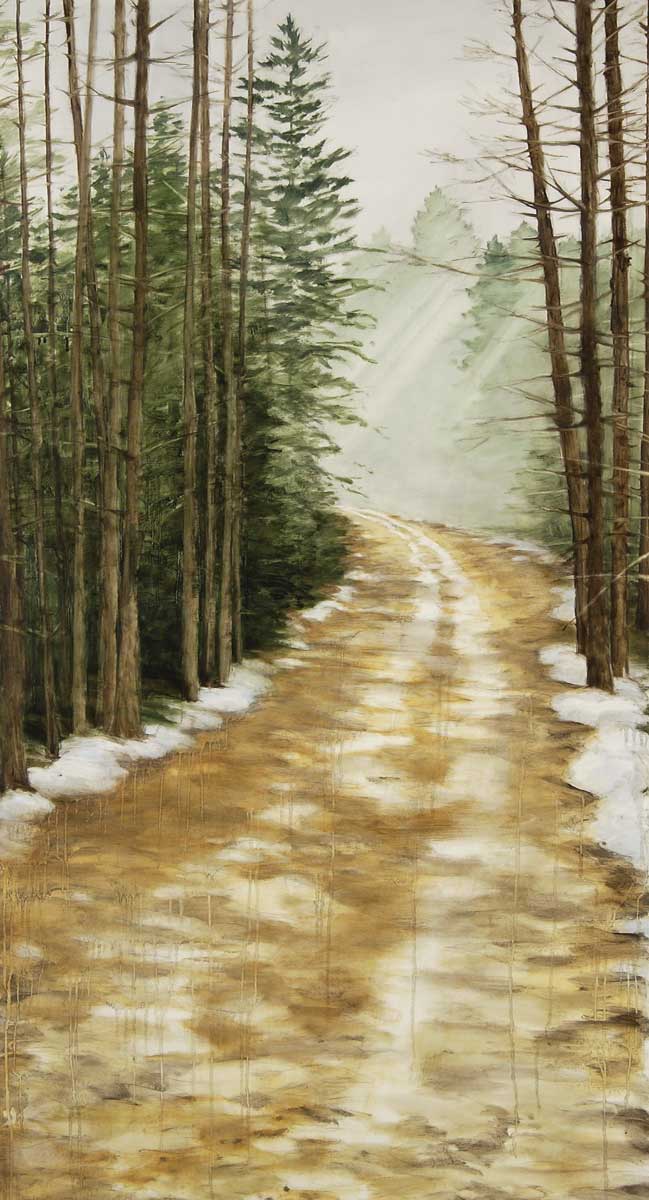 Up until last year Robichaux plowed her own driveway, shown here in Just About Home, 2004, oil on linen, 66" x 36". In the book, Peavey and Robichaux express sadness at, and concern for, the loss of wilderness in Maine. The painter counts herself fortunate that a lot of the land around Flagstaff is preserved. The fact that the lake is shallow helps deter speed boats and jet skis. “On a beautiful summer day in July,” she reported, “you can be out there and see maybe one or two other boats.”

Robichaux shared a love for the lake with Alexander Scheeren, Uncle Al, as he was affectionately known, a musician she first met in 1976 when he played with Strunk’s band. Her 2015 show at the Pucker Gallery in Boston was dedicated to her friend, who died on Veteran’s Day in 2014. In her “Elegy for Alex,” she recalled how he would drive her around the back roads of Maine as she searched for painting sites, “that wild apple tree in full bloom or the perfect vista of fall foliage.” Robichaux has been helping create the Uncle Al Fund, which will support students from Somerset and Franklin counties who want to pursue studies in music.

Until last year the self-reliant painter plowed her own road in what a Kingfield town selectman called an “arrest-me-red” Dodge Ram pick-up. After the winter of 2014-2015 she decided to let someone else deal with the snow. Her beloved truck had also gotten so beaten up over the years that it wouldn’t pass inspection. “I’ve paid my dues,” the 66-year-old painter said proudly.

Robichaux has also attained a stature as one of New England’s most distinguished four-season landscape painters. She has immersed herself in a Maine she finds “beautiful and brutal—alluring and nurturing one day, sharp and challenging the next, but always a distinct presence.” That’s what we admire: her commitment to sharing a singular sense of place.

The Pucker Gallery in Boston will host Robichaux’s seventh solo show, “Monhegan to Manchac–Paintings of Maine and Louisiana,” December 9, 2017-January 28, 2018.

Her work can also be seen at Elizabeth Moss Galleries in Falmouth.