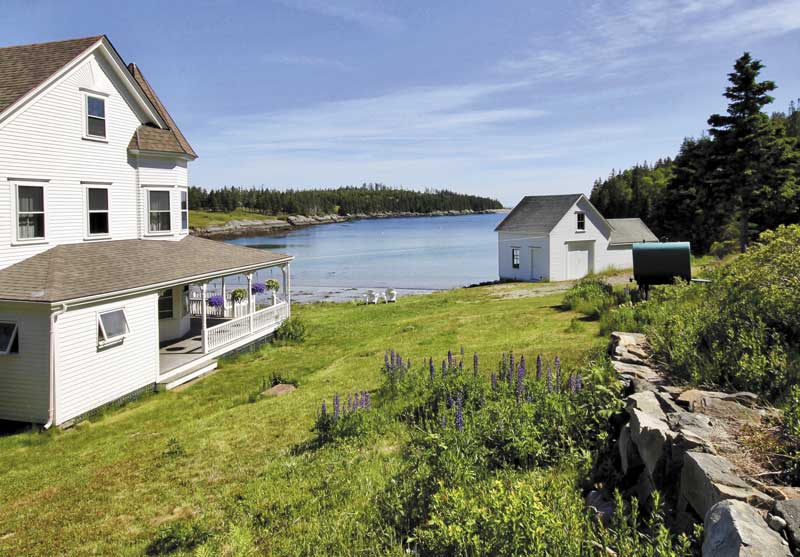 I meant to record the elegance of his young voice pinging across such a magnificent harbor. Instead, I listened from the porch of my Queen Anne-style home, which had been built in 1911 by local fishing legend Gooden Grant. The house with a two-story turret faces the harbor and wharf, with a view of Grant’s fishing grounds from nearly every room.

My son was seven when he first strolled Isle au Haut’s Head Harbor at low tide singing Amazing Grace. His high, hauntingly beautiful voice reverberated against rocky shores and bluffs, the harbor’s natural acoustics making a concert hall out of clamming flats. That boy was about to become a lobster fisherman, and I wondered what Grant would have thought of such a little guy following in his gigantic footsteps.

Raising children on a Maine island worked for us as it does for many. Such a vast playground of nature results in exceptional benefits for the body and soul. As described by William A. Haviland in At the Place of the Lobsters and Crabs, the island my children worked and played on is Solikuk, or Sulessik in Passamaquoddy, meaning “Place of Shells.” In 1604 French explorer Samuel de Champlain named it Isle au Haut, meaning “High Island.” About half of the isle is now a part of Acadia National Park, complete with 18 miles of trails accessible from our home. For island children, running to special beaches, along shores, or to inland spots are everyday activities.

A Mainer as young as eight can fish ten traps and sell his or her catch for a decent profit after paying for bait and fuel. Like many youngsters on the coast of Maine, mine got their student lobster fishing licenses early. One of my treasured memories is sterning for my older son in his great grandfather’s Cape Dory rowboat, Henry Firedragon, and then later on in his motorized skiff Plentiful. By their teenage years my sons’ trap numbers increased, as did their earning power and levels of responsibility. 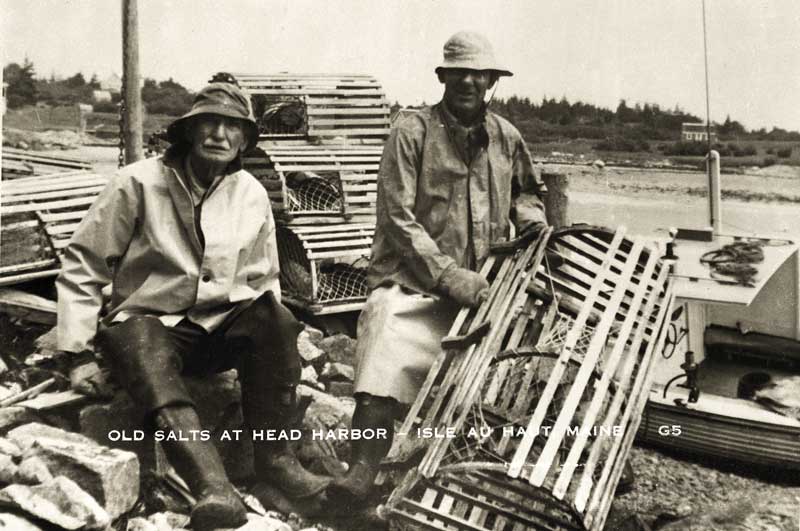 Gooden Grant (left) and Minot Conary pose with their traps in Head Harbor sometime between 1955 and 1961, the year Grant’s wife Nettie passed away and he retired. Photographer unknown. Courtesy Penobscot Marine Museum As a boy in 1886, Grant caught lobsters with hoop nets and whittled pegs to keep their claws clamped shut. He later transitioned to wooden traps. My boys set wire traps and banded the claws.

My two sons started fishing at ages nine and eight, some 120 years after Grant began at ten.

But while Grant fished for 75 years and was the stuff of folklore for his fierce fishing prowess, my fellows forged new paths and let their licenses lapse.

There are plenty of island life-balance riches to go after for the industrious: As I write this, the Isle au Haut Community Development Corporation (www.isleauhaut.org) is accepting applications for renting one of its affordable homes. Along with a pristine environment full of wonders and healthy living, the island’s K-8 school is staffed with dedicated, innovative educators—a splendid opportunity for an adventurous young family. The isle boasts new babies and the town center is thriving with its school, store, post office, power company, town hall, church, ranger station, gift shop, and a couple of summer eateries. (The Revere Memorial Hall houses a library, town office, performance stage, historical society, volleyball and basketball courts/yoga studio conversions, and is where potluck suppers and town meetings are held.)

According to census data, 316 people lived on Isle au Haut year-round in 1870, a number which dropped to 160 by 1910 after the cannery closed in 1880. Islander Billy Barter estimates there are between 50 and 60 year-rounders today. “When I was a boy, there were about 100 living on the island, 20-odd of them in Head Harbor,” recalled Barter, who at 84 will soon have been fishing for more years than Grant did. Head Harbor even had its own one-room schoolhouse. According to the Island Institute, there were 300 unbridged Maine islands inhabited year-round at the turn of the 20th Century, while today there are 15. 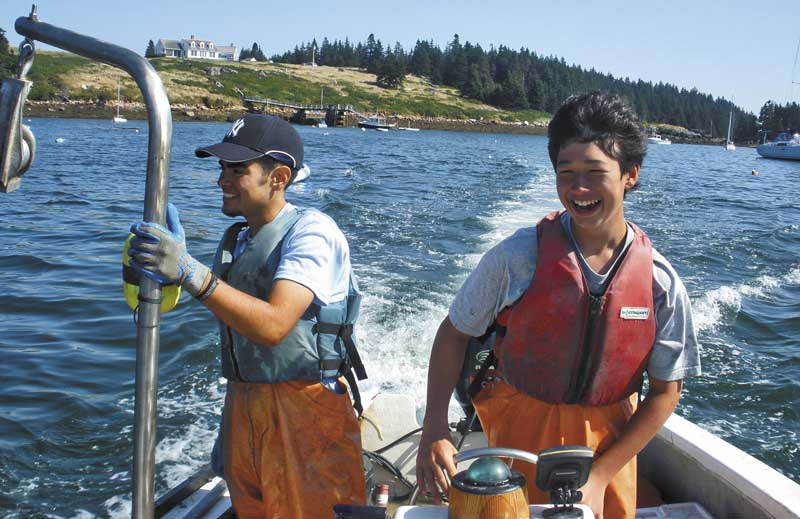 The author’s son Ethan and his cousin Abdelqader lobster fish in Isle au Haut’s thoroughfare in 2009. Photo by Patricia Bakir Grant varied his harbor lobster fishing by going after haddock, hake, and cod; many of today’s Maine island captains fish for halibut,  scallops, and tuna to supplement the lobster season. Lobster fishing can be rough around the edges though: Under the cover of thick fog in 2007, the Fishing Mafia cut my son’s 10 traps, which had been set in front of his own home, behavior the 11-year-old boy described as cowardly. The young fisherman recovered quickly, though, taking a hearty-laughed solace when a summer resident used a Mom-unapproved expletive to describe mainlanders stealing an island kid’s gear. Generous cousins and friends took up a collection to help replace lost traps, pot warp, and buoys—children using chore allowances to fix the crimes of grown men. (A few years later, the fisherman who had ordered the trap hit apologized.)

So distinctive are its history and the man who built this iconic Victorian that husband Ellard and I were able to add the Gooden Grant House to the National Register of Historic Places in 2013. The designation is based on “events that have made a significant contribution to the broad patterns of our history” and “the lives of persons significant in our past.” I believe that salty old harbor fisherman would be proudly humored that America—as islanders call the mainland—officially recognized his life and times. 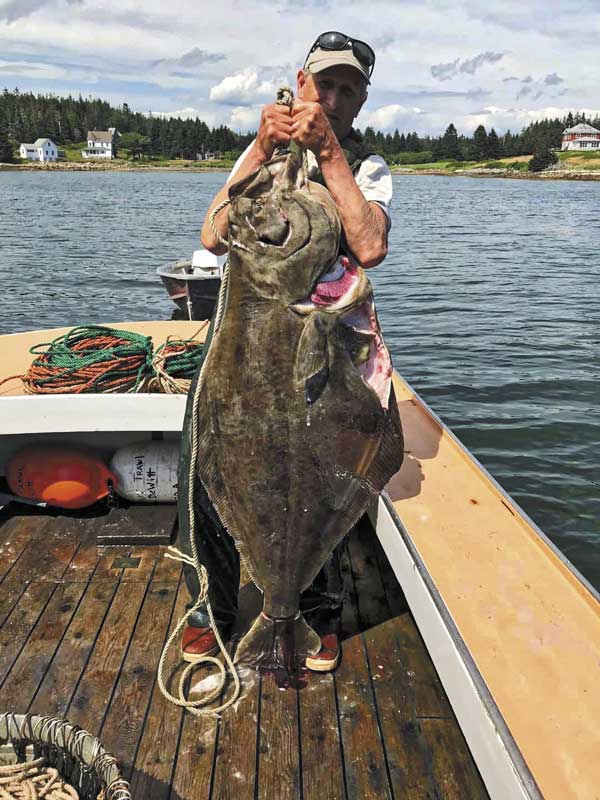 A Head Harbor resident scores a hefty halibut in deeper waters outside his harbor. Photo by Kendra Chubbuck Head Harbor still resembles the Gooden Grant days: lobsterboats working the harbor; ospreys, eagles, and herons competing for airspace; and moonlight turning waves into undulating bars of sparkling silver. Electricity, phones, and WIFI connecting this remote environment to the world are our biggest changes, and we do not live off the land and sea as much as Grant did: Back in his day, sheep farming, stores, and busy wharfs existed on both sides of the harbor.

Today, as my younger son’s big fluff of a German Shepherd races after seagull shadows shooting across the flats, I see that little boy again, his long hair blowing in the gentle breeze. In my mind’s eye Caleb is singing, notes as crystal clear as those harbor waters. I look to Gooden’s barn, where my older son painted his buoys and recall Ethan popping his head out of the window holding a brush slopped with paint. “I love you Mom!” he called, as thick yellow snaked down his wrist and then along crisp-white clapboards I had painted the previous day.

That bright spill is gone, covered by well-meaning crew before I could stop them. And there is no boy singing on the flats. I will not always be here either, but memories of raising treasured sons with a wonderful husband in Gooden’s harbor home are mine forever.

Kate Hotchkiss is the author of On Harbor’s Edge 1912 – 1913, the first of several dramatic tales spanning 100 years of Maine island fishing. She formerly sterned as an apprentice lobster fisherman, and worked for the United Nations on food safety and sustainability.