By Rob McCall
“We are stardust; we are golden, and we’ve got to get ourselves back to the garden.”
—Joni Mitchell

Some days it seems as though everything is holding its breath. Autumn crawls along with most of the leaves fallen and flowers going to seed, but the grass is still green. Hunting season is underway, but balmy days still come and go. It seems as though the whole world is waiting for the next scene or season to begin.

This is a good time for smaller creatures to increase their stores for the coming winter. Gray squirrels gather nuts and red squirrels gather seeds and squirrel them away in hundreds or thousands of hiding places. I once found one of our birdhouses packed chock-full of the tiny cones of the hackmatack from which it was hanging. You couldn’t have fit even one more into it. Field mice and chipmunks gather sunflower seeds and tuck them into the wood pile or under rocks or logs. Blue jays bury acorns in the ground. According to Audubon.org, jays can find where they stashed thousands of nuts, seeds, and other morsels by remembering a highly detailed map of their turf. As the cold months progress, they go to these caches. A few they forget, of course, and these become the forests of tomorrow. 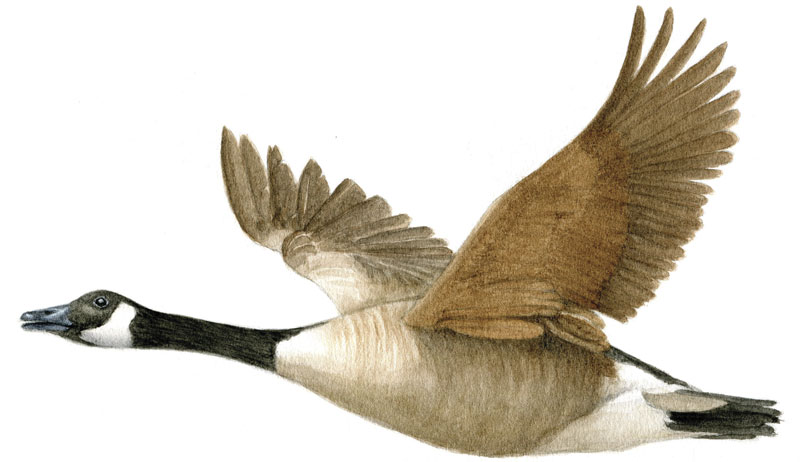 At this season there are few sights to entertain the eye and few sounds to fill the heart more fully than those of a flock of Canada geese (Branta canadensis) flying south for the winter. First comes the faint sound of honking through the trees. Then, the vanguard of the “V” appears overhead with massive wings beating, webbed feet tucked up tight and long necks stretched eagerly ahead. Then, it widens out into two long parade lines and we can hear the rush of wings through the honking of dark flyers. The performance is so mythic that it may awaken our own latent migratory urges so we want to rise and join the flock coursing over the orange and yellow hills.

From the geese we derive lessons in navigation, courage, cooperation, and leadership. It is said that the bird at the head of the “V” takes turns with other members of the flock. If the head bird gets tired, or wavers, or wanders off course, another bird will move up to take its place in a change of leadership for the sake of the flock. How it is decided who will take over in this peaceful transfer of power is something we do not know. They cannot fight for first position because they are on the wing and a smooth flight is essential lest the flock be endangered. Then, when it gets tired, the new leader drops back and another takes its place. Somehow the leader must know when to press ahead and when to bring the flock down for food, water and rest at various places along the way southward. Many of the resting places are traditional and have been used for years during migration.

Some of us will remember a time when the bark of a healthy American beech tree trunk was so smooth and beautiful you wanted to caress it, or carve your initials in it. It looked like the skin of an elephant. In a beech grove you could imagine you were standing in a herd of elephants. Those days are mostly gone now because of the beech bark disease. American beech (Fagus grandifolia) in the wild is now likely to have scarred, gnarled and pockmarked bark due to the ravages of a tiny scale insect that burrows into the bark allowing a nasty pathogen to get in and cause devastating cankers, or cancers if you will, that slowly destroy the tree. Once prized as one of the hardest of hardwoods, useful for tools and work surfaces, infected trees are now good only for firewood. The insect comes from Europe and has been spreading slowly westward since the 1930s, now showing up in Michigan and beyond. On the bright side, a certain number of beeches seem to be immune and over time may replace the diseased trees. This magnificent tree still has a future in our forests.

As it is the fate of the turkey to be forever associated with the American Thanksgiving holiday, so it is your commentator’s fate to associate Thanksgiving with one historically large and combative turkey. In the early summer of 1980 I had a walking cast on my left leg and was hobbling up the road like Long John Silver to visit our neighbors in Pembroke when I heard strange sounds from the garden: a deep thrumming punctuated by an eerie sort of chortling. As I approached the house, an enormous turkey, near shoulder-height with white feathers tattered and dirty, appeared between me and the front door. It looked to be about 45 pounds and was in full tom turkey display, wings stiffly thrumming on the ground, tail fanned, and neck and wattles red, like a Spanish galleon in war regalia. “This is a watch turkey just doing its job,” I said to myself. “I’ll speak politely to it and walk casually by.”

I took a couple of confident steps toward it whereupon, bearing the shared rage of generations of gobblers killed so white guys like me could feast, the beast jumped at my face with clawed feet as big as my hands. Seeing that this bird was dangerous, I backed away and raised my walking stick to defend myself and gain time to catch my breath. Tom pressed his advantage and came quickly after me as I hobbled behind a car in the driveway taking a few half-hearted swings at his head with my walking stick. These pathetic efforts had no deterrent effect; in fact, the huge bird seemed energized by them. As soon as I got to the other side of the car, there he was, ready to leap at my face again. Running away was not an option with the cast on my leg, nor was climbing on top of the car. This is when I started yelling for help.

After a couple more pursuits around the car, the lady of the house emerged with a smile, swung her leg over to straddle the bird and grabbed its neck with both hands. She could have been riding the giant rooster on the merry-go-round at the fairgrounds. Tom actually seemed to enjoy this. “Okay, go on in the house,” she said. After giving me a cup of coffee and a piece of rhubarb pie to take the taste of shame and humiliation out of my mouth, she told a familiar story. They bought the turkey the year before to serve up for Thanksgiving, but the children persuaded them not to kill it. It quickly grew into a ferocious attack turkey which kept visitors and friends away and even intimidated the UPS man who now left their packages out by the road. We caught up on other news and she escorted me out, waving from the back of the turkey as I limped down the road. 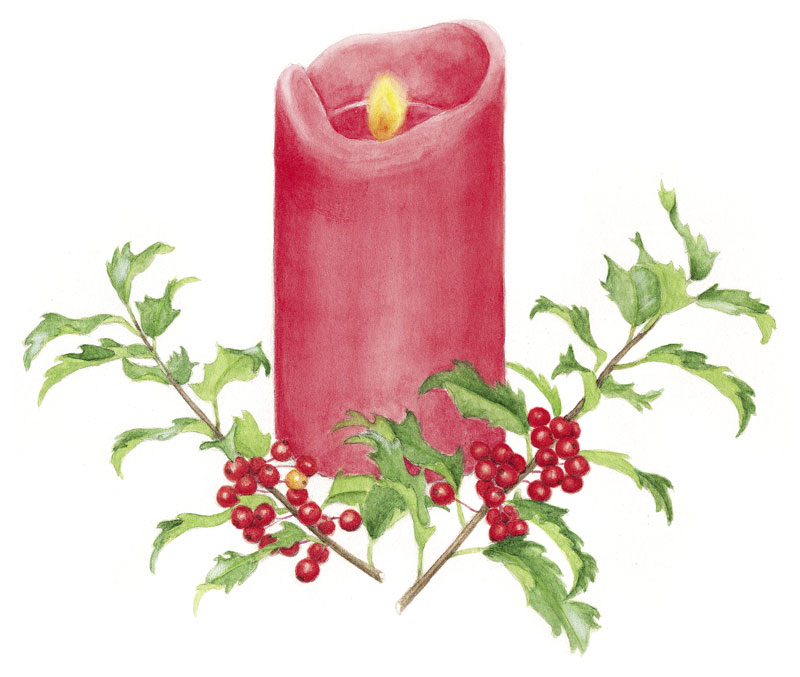 When we moved here 30-some years ago, one of the first things we noticed was how early it started to get dark in December. Headlights often go on by 3 in the afternoon and it is still dusky when we make the bed at 8 in the morning. This gives seasonal holidays a new intensity, because these traditional celebrations are centered on the light in the darkness.

Chanukah in Judaism celebrates the light that would not go out, a symbol of the hope of freedom for the Jewish people. In Zen Buddhism, it is Rohatsu that celebrates the enlightenment of the Buddha. There is the feast day of Our Lady of Guadelupe, patron saint of Mexico, and then it’s time for St. Lucia’s day,
celebrated in Scandinavian countries. Christians celebrate the four Sundays of Advent with a candle lighted each week, leading up to Christmas. Kwanzaa, with its seven lights and seven principles, is a celebration of African American culture. According to the Old Farmer’s Almanac, the beginning of the annual Halcyon Days marks when storms do not blow for seven days as in Greek mythology—a good test of the Old Farmer’s Almanac long-range weather forecasting ability.

Maine is known as the Country of the Pointed Firs, and with our wreathes and swags and firs decorating our houses inside and out, this season might as well be a celebration of the evergreen tree. One can’t help but think that some of our neolithic ancestors were celebrating the Winter Solstice with evergreens long before the story of Jesus came along. The Great North Woods or boreal forest is made up largely of evergreens, which have distinct advantages over deciduous trees in a cold Northern climate. Their needles are tough with little surface area, which protects them from freezing. Also, conifers stand green all year which allows them to make food whenever the sun shines, regardless of how meager the sunlight. And, their branches shed snow easily without breaking, as most of us have noticed from time to time walking in the woods when a sudden load of snow pours down down our necks. The favorite of this season is balsam fir because of its deep green color, its silky needles, and its captivating aroma.

One of the great benefits of living way out on the narrow two-lane roads and face to face with the forces of the Creation, is that you can walk directly out into the presence of the Great Benevolent Spirit, which created the entire world—yourself included—out of all the same stuff.

See the tracks of the smaller creatures in the snow writing their truth in a strange, runic scripture that can be read, but only by the fearless. Feel the cold wind from the frozen north, or the wet wind from the east off the Great Water. See the lights in the windows of the white houses and the white churches with their long spires reaching heavenward topped by weathervanes pointing to the four sacred directions. See the sun start its sojourn back up toward the peak of the heavens and feel the gut-deep joy at the returning of the light.

From Rabbi Lawrence Kushner: “The days have been growing shorter, imperceptibly but inescapably darker… Heading into the night of the winter solstice, every religious tradition has some sort of festival of light. We’re all just whistling in the dark hoping against hope that someone up there will see these little… candles and get the hint.”

Rob McCall lives in Brooklin, Maine. This almanack is excerpted from his radio show on WERU FM, which is streamed on weru.org.

A Few Ideas for Winter Reading