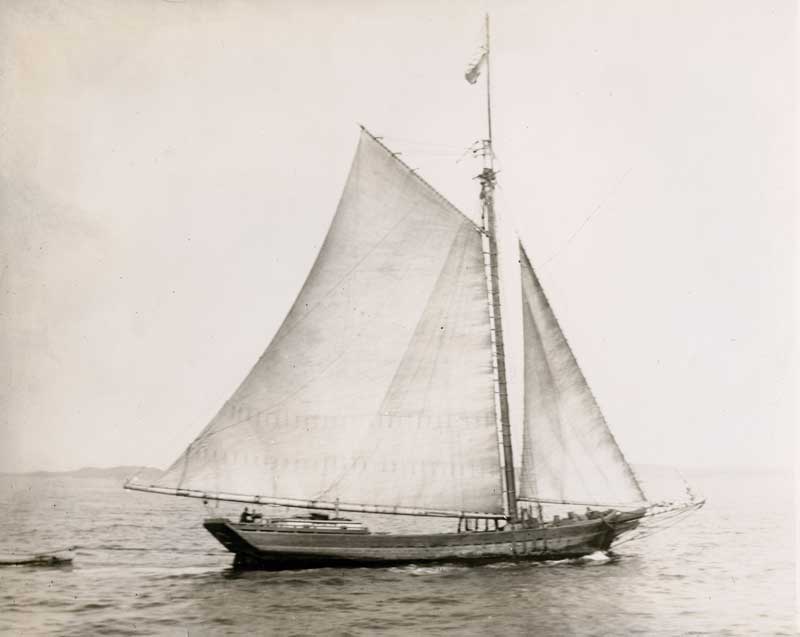 Stone sloops had enormous mainsails, up to 1,000 square yards in area. This is the M.M. Hamilton, which was one of 14 stone sloops employed in building Rockland’s breakwater.

The stone sloop was a 19th century broad-beamed sailing vessel that carried stone, rock, and granite from Maine to East Coast ports such as Rockland, Portland, Boston, New York City, and Wilmington, Delaware, where the cargo was offloaded and shipped by rail to Washington, D.C., Philadelphia, and the Midwest. Stone, and especially granite, was used to build prominent public buildings of the classical “Beaux Arts” style, conveying strength, steadfastness, and gravitas in the 1890-1930 era.

The Beaux Arts style was especially suited for public buildings designed to deliver a strong symbolic message, such as libraries, museums, courthouses, train stations, and government offices. The style uses formal symmetry and classical Greek and Roman decorative elements such as columns, pediments, and prominent stairways to create a grand and imposing architectural statement. Exterior decorative details might include balconies, terraces, porches, and porticoes as well as ornamental windows and grand entrances. Examples of such structures are the Massachusetts State House, the Washington Monument, the Chicago Board of Trade, and the John Adams (formerly Suffolk County) Courthouse in Boston. 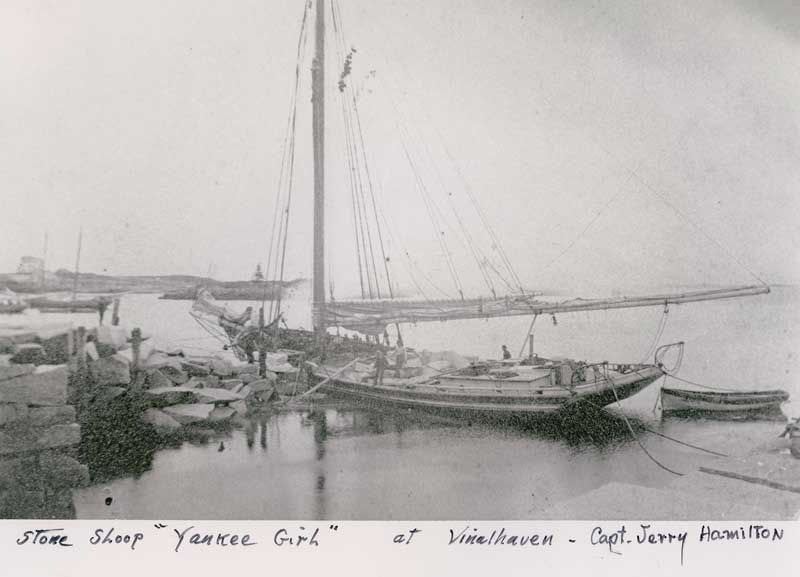 Vessels were typically heavily loaded with granite to the point of the decks being awash. Here, granite is being loaded onto the sloop Yankee Girl at Vinalhaven.

Paving stones, which were usually made by small quarries, were also carried by these sloops to railheads where they were loaded on trains and shipped across the United States. Granite was carried to build harbor breakwaters, lighthouses, and forts, and was also used for the ballast in the launching of wooden ships.

Carrying granite “grout” was big business, as well—grout was the granite filler dumped behind the well-laid granite retaining walls of breakwaters and wharves. At the Maine ports of Bar Harbor (1912), Portland (1837), Richmond Island-Cape Elizabeth (1881), Rockland (1902), and Saco (where construction phases began in 1828), breakwater retaining walls were backed with granite grout that also was used behind the granite block facing of wharves in Portland and Boston. 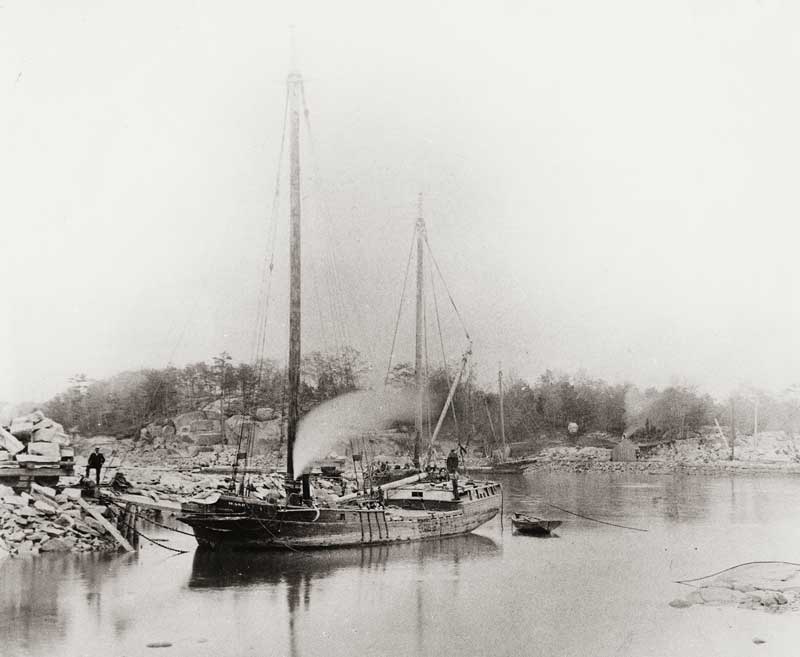 Sloops were sometimes converted to schooners, as shown here in this circa-1910 photo of the stone carrier Wasp. Although the mechanism for hoisting the stone was initially a windlass operated with handspike, that evolved in the late 1860s to a steam winch.

The stone or granite sloops were custom-built for moving the heavy, dense cargo, and the typical sloop was 90 feet long and displaced 120 gross tons. They were broad-beamed and sported a gaff-rigged mainsail as big as 1,000 square yards (the largest sails fabricated in Maine). Sloops were preferred for carrying stone because the single mast left the deck free for moving the stone by a boom pole. A boom derrick rigged with the single mast left ample open space to load and unload granite, and it was secured on deck when the sloop was under way.

The mechanism for hoisting the stone was initially a windlass operated with handspike. That evolved in the late 1860s to a steam winch. Smaller sloops were operated by a minimal crew of three, while the largest sloops carried five people, including the captain. There was no galley or fo’c’s’le, just the cabin where everyone ate and slept. A crew of five could haul 200 tons of granite, which would be landed as it was loaded, with a manual or steam derrick fixed at the base of the mast.

Most of these sloops were built or owned at Chebeague Island, but other Maine yards built these special vessels in Harpswell, Bath, Rockland, Dennysville, Mt. Desert, South Brooksville, and Newcastle, among other locations. 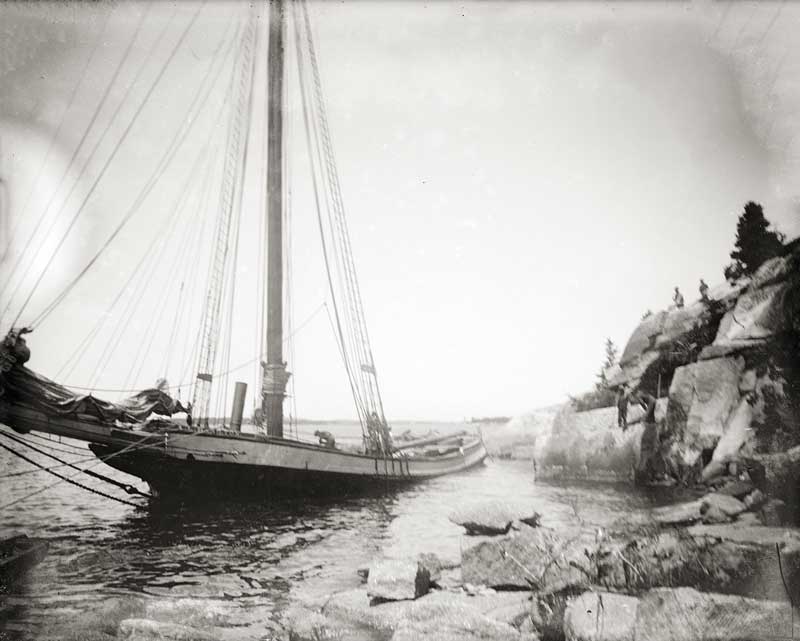 A lot of smaller sloops on the Boston run were loaded just shy of the sinking point.

A lot of smaller sloops on the Boston run were loaded just shy of the sinking point. Historian John Leavitt recalled, “I have seen the Annie and Reuben [a schooner] with something over 200 tons of stone aboard, lying at Crotch Island [off Stonington] wharf with the water flowing through the scuppers to the height of an inch or more on the main hatch coaming. This in a flat calm.”

Stories of stone freighter sinkings were common, and among the causes were losing caulking, springing a plank, or other leaks with which the pumps could not keep up. Although some coastal cargoes such as lumber might permit jettisoning in desperate times, heavy blocks of granite were unmovable by the crews aboard without using the boom derrick. Tragically, the loss of a sloop could devastate a family and an island or small community because the crews were often kinfolk.

Retired Rear Admiral William Alexander, in his 1973 book Harpswell on Casco Bay, wrote that the last survivor of the Chebeague stone sloop era was the M.M. Hamilton. She was originally named for Mercy Melissa “Missy” (Mrs. John F.) Hamilton and cost $16,000 to build. Built in 1869 by Sylvester Stover at Stovers Cove, Harpswell, as a centerboard sloop, she was 84.8' LOA, 26.2' beam, and drew 7.2'. Her mainsail was in excess of 1,000 square yards. Starting in 1880, under Capt. Sylvester Isaac Hill, she freighted most of the granite cut at the Hurricane Granite Company quarry on Hurricane Island (off Vinalhaven) for the Washington Monument as well as Vinalhaven granite for the State, War, and Navy Building in Washington, D.C. That is, she sailed with granite to New York City, from which point it went by rail to Washington, D.C. In 1888, she often sailed from Vinalhaven with granite for the new Suffolk County Courthouse in Boston.

In later years, some sloops were refitted and rerigged as schooners for hauling stone and other cargo; the M.M. Hamilton was re-rigged as a schooner in 1918. That refitting retained her large foremast and bowsprit, and added a conventional mainmast that was shorter than the foremast. The original cutwater, billet head, and trailboards were replaced by knees; the centerboard was removed and replaced with a fixed keel, and a steam winch house was built around the foremast. As a schooner, she freighted lumber and boxboard.

“The [schooner] mainmast stepped as far aft as it could go…resulted in a tremendous mainsail, and, ‘winged out’ with the foresail to one side and the mainsail to the other, most of the stone vessels could walk away from other vessels when the wind was dead aft,” wrote John Leavitt in Wake of the Coasters. 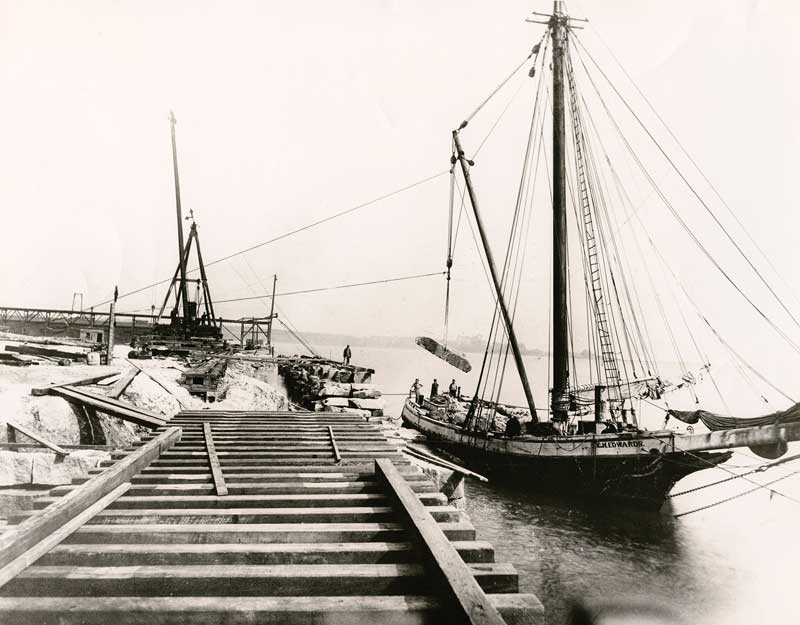 The boom derrick rigged with the sloop’s single mast left ample open space to load and unload granite. The derrick boom was secured on deck when the sloop was under way. Here, the crew of the sloop C.H. Edwards is using her cargo boom to place a large block of stone while rebuilding the face of the Rockland-Rockport Lime Co.’s wharf in 1912.

According to 1897 correspondence of U.S. Naval Academy Superintendent Capt. Phillip Cooper, reprinted in the book Maine Quarries, Granite Sloops, and Flagg’s Naval Academy Vision, at the height of the granite industry Casco Bay was home to 33 major quarries; statewide, the granite industry employed 10,000 to 15,000 quarrymen, cutters, and apprentices. A raft of small granite production companies entered and left the business, depending on the vagaries of the market. But by 1899, the stone sloop era was coming to a close. The costs of cutting and shipping granite were rising, and steam lighters (flat bottomed barges) replaced sloops and schooners in moving granite by water.

Impacting the granite industry, too, were changes in building construction technology. Cities in the United States had been traditionally made up of low-rise buildings, but significant economic growth after the Civil War, and increasingly intensive use of urban land, inevitably led to the development of taller buildings beginning in the 1870s. Concrete replaced stone in building foundations, and skyscrapers were designed using steel I-beams rather than stone to support building structures. Other new inventions, such as the elevator and electric lighting, made it both technically and commercially feasible to build a new class of taller buildings.

The M.M. Hamilton represented the end of an era. Admiral Alexander reported that she was sold in 1930 to a professor in Duxbury, Massachusetts, for use as a floating zoological laboratory. In 1935, she was beached in shallow water at Clark’s Island, Duxbury, and abandoned.

Roger Moody of Camden writes about boats and boating history. Thomas Jeffrey Jennings is an artist and midcoast-Maine native who now lives in Houston, Texas.