Win your own schooner 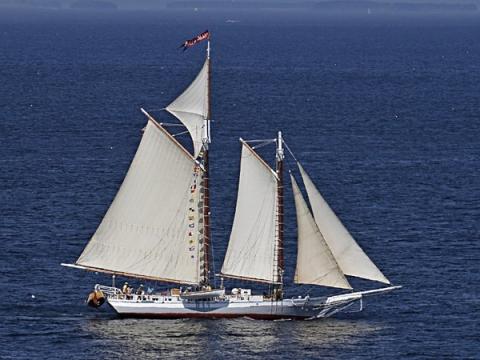 You've read about essay contests to win country inns, but what about a boat, a historic schooner?

Brenda Thomas, captain and owner of the Schooner Isaac Evans in Rockland, Maine, has decided she wants to spend more time on land, but instead of putting her 65-foot vessel on the market, she is holding an essay contest.

After 21 seasons on board the Evans, and 17 seasons as owner, Thomas has decided to devote her time to her newest love of being a mom and will award the schooner to the writer of a 200-word essay that best addresses the theme "Why I would like to own the Maine Windjammer Isaac H. Evans."

"As a single mom to two very little kids, it's getting harder and harder to be away from them for extended periods of time while I am running trips," she said. "My heart is divided because I love the Evans and I love the life I have built with her but I see the kids growing so fast and I don't want to miss any of it."

Designated as a National Historic Landmark, the 65-foot long schooner was built in 1886 in New Jersey for oyster fishing in Delaware Bay. She was brought to Maine in the 1970s and rebuilt for the passenger schooner business in 1973. The Evans, which takes passengers on overnight cruises as well as day sails out of Rockland, Maine, has berths for 22 passengers.

Brenda Thomas, who grew up in Maine, began working on the windjammer in 1995 as a cook. She bought the boat in 1999 and got her Coast Guard Captain's license. She has been captain ever since.

Those interested in entering the contest will need to pay a $125 entry fee. If she does not get 8,000 entries, Thomas reserves the right to cancel the contest and return the entry fees.

Thomas plans to select the top 20 essays and turn them over to two impartial judges for selection of a winner and two runners-up.

The winner will receive a Certificate of Documentation for the vessel, free of mortgages or liens. Entries must be postmarked on or before October 31, 2015, and must arrive at the Rockland Post Office by November 7, 2015. The entries should be addressed to Maine Windjammer Essay Contest, Maine Boating Adventures, LLC, PO Box 1765, Rockland, ME 04841.A winner will be chosen by