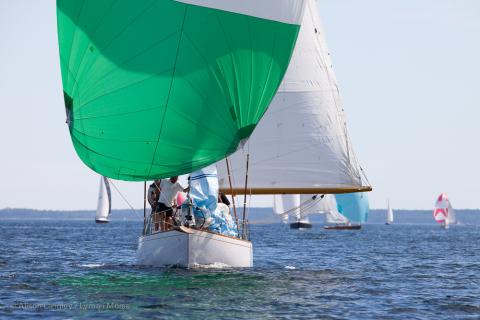 A fleet of more than 40 boats will set sail off Camden on July 27-29 in the second annual Camden Classics Cup, a benefit for LifeFlight of Maine.

The two days of racing will include a special class for Sparkman & Stephens designed Dolphin 24s, a small boat fleet spearheaded by Alec Brainerd of Artisan Boatworks. There also will be a Youth Regatta for racers between the ages of 12 and 17 years of age, sailing in 420s on Friday, July 28. Participating sailing programs include Camden Area Youth Sailing Program, The Rockport Boat Club, The Apprenticeshop, North Haven Casino,Castine Yacht Club, George Stevens Academy, Lincolnville Boat Club, and Tarratine Yacht Club.

Now in its second year, the Camden Classic opens the classic yacht racing season in Maine and serves as the introduction to Camden Classics Week. The event format includes two days of CRF, Spirit of Tradition and PHRF racing followed by post-race celebrations.

Special events for the public include the Maine Maritime Parade of Sail on Saturday morning at 10am. The fleet of participants, which includes all Camden Classics Cup race boats, committee boats and elegant support boats, will parade through Camden Harbor along the waterfront in full dress ship. Harbormaster Steve Pixley and TV personality Erin Ovalle will provide commentary about each yacht. The broadcast can be heard from the town landing.

Tickets for a Saturday night dance party with the Jason Spooner Band at the Camden Yacht Club are still available. Call 207-236-4378. Tickets are $60 and include an open bar, food and dancing.

After the the harbor will remain filled with all sorts of boats in preparation for the Penobscot Bay region’s Wooden Boat series. A highlight is Bob Stephens’s 1 p.m talk on Tuesday, August 1 at the Camden Public Library on what makes a beautiful boat. Stephens is a principal at Stephens Waring Yacht Design in Belfast, Maine. For more information and a complete schedule visit: www.camdenclassicscup.com.