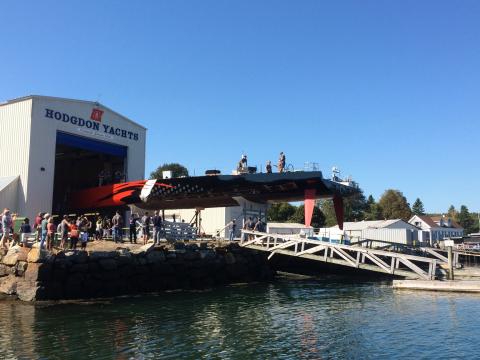 Washburn & Doughty Associates of East Boothbay is in negotiations to acquire two adjacent buildings from Hodgdon Yachts. W&D Chairman Bruce Doughty told the Boothbay Register that the move would allow his company to expand. Tim Hodgdon confirmed this week that the two firms are in serious negotiations that he expects will be finalized in July.

“It is not a done deal, but a strong possibility,” he said.

Washburn & Doughty recently launched its 40th tugboat for Moran Towing Corp. of New Canaan, Conn. Another tug is under construction and more contracts are in the works. Hodgdon recently launched the latest in its line of luxury tenders.

Meanwhile in Belfast, developer Paul Naron purchased a waterfront workshop from boatbuilder French & Webb for redevelopment. Although French & Webb sold one workshop, business is continuing as usual in other buildings the company leases at 21 and 25 Front St., said company president Todd French. French said he bought the property 10 years ago and the sale was an opportunity that he could not turn down. Current projects include work on a large motor sailor in San Diego, and building cold-molded Paine 15s. Completed projects include the delivery of a custom wooden Jacuzzi to one of the world’s largest yachts in Europe.

In East Boothbay, Hodgdon said the deal with Washburn & Doughty, which is expected to close in July, does not include his company’s buildings on Murray Hill Road, its service yard and marina in Southport and a facility in Damariscotta where Hodgdon builds sleek limousine tenders for mega yachts. The buildings involved in the negotiations were part of the former Goudy & Stevens shipyard, which Hodgdon purchased in 1999. Yachts the comany built there include Comanche, a 100-foot-long maxi sailing yacht; Antonesia, (1999) a 124-foot-long sailing yacht; Scheherazade (now Asolare), a 154-foot long luxury yacht built in 2003, and an 83-foot-lexperimental high-speed technology demonstration craft for use by the U.S. Navy SEALs.

But times have changed, Hodgdon said, and his company is refocusing in other areas. All the employees who worked in that facility already have been moved to other areas, he added.

“The mega yacht industry has changed globally,” he said, “making the use of this great facility is better suited to Washburn & Doughty’s commercial business. It’s a good move for both companies. It will allow Washburn to grow and all us to focus on other aspects of our business.” That includes service work and the marina at the Southport yard and the high-end tenders.

Washburn & Doughty began building fishing boats in 1977 and specializes in the construction of steel and aluminum commercial vessels. Last winter the company won an $8.8 million contract to build a new vessel for the Maine State Ferry Service.

The photo above shows the 2014 launch of Commanche at Hodgdon’s East Boothbay yard.

The Net Result: Our Evolving Fisheries