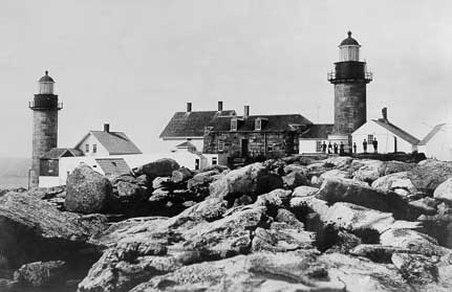 Boaters who count on the sound of lighthouse foghorns to help find their way should not leave home without a working VHF radio. The Coast Guard has announced plans to install Mariner Radio Activated Sound Signals this spring at seven remote lighthouses in the Gulf of Maine.
Last year, the federal agency replaced 17 fog detectors with so-called MRASS devices that enable mariners to activate lighthouse sound signals on-demand with a marine radio. The Coast Guard is now proposing to install these devices at Halfway Rock, Matinicus Rock, Mt. Desert Rock, Great Duck Island, Petit Manan Island, Libby Island, and at the Little River Lighthouse, according to a news release.
“This environmentally responsible decision will reduce the negative effects that continuous sound signals have on area wildlife, especially migratory bird populations, along with the people that live and work in these remote locations,” the Coast Guard said. “Instead of the fog horns sounding continuously 24 hours-a-day, seven days-a-week, the MRASS will allow mariners to activate the sound signal when needed by keying the microphone of a standard VHF-FM radio five times on channel 83A. Once activated, the current sound signal type will remain unchanged, and it will shut off after 60 minutes of operation.”
“This change will allow us to reduce our overall footprint by decreasing the required number of solar panels and lead acid batteries onsite when compared to the current configuration.” said Capt. Michael Baroody, Commander of Coast Guard Sector Northern New England. “It will not alter the light characteristics, equipment, or patterns; it only changes the method used to activate the sound signal.”
The proposed conversions are planned for May 2017. The Coast Guard will advertise the changes in the weekly First District Local Notice to Mariner publication and will also conduct direct outreach to harbormasters and other waterway users.
“Given our strong commitment to the safety of all mariners who operate along the coast of Northern New England, we will be providing ample opportunity for public comment along with an extensive public safety and awareness campaign before installation begins”, said Lt. David Bourbeau, Waterways Division Chief at Sector Northern New England. “Should you or members of your organization have any questions, we would be more than happy to meet with you personally.”
For more information, contact Lieutenant David Bourbeau at (207) 347-5015 or nnewaterways@uscg.mil.
The lighthouse shown here is Matinicus Rock.

Sailmakers turn their talents to mask-making