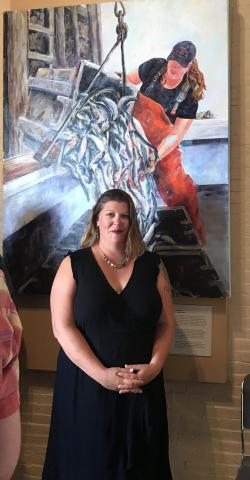 A new exhibit at the Penobscot Marine Museum in Searsport, “Lobstering Women of Maine,” features paintings of a dozen or so of these women done by Belfast artist Susan Tobey White. The exhibit showcases the lobster industry, explores Maine’s traditions and heritage, and reveals the strength of women. Many of these women were at the  exhibit opening last weekend posing proudly in front of their portraits, all of which were close to life-size and popping with color.

The painting of  Genevieve McDonald of Stonington shows her loading a cascading toteful of silvery blue herring into totes on the deck of her boat, the Hello Darlings II. The details of her face are blurry. What you notice instead are her strong arms and confident stance.

“It such a great honor to be painted,” said McDonald. “I’m so happy to be here with my fellow women in the industry and being recognized for our contribution.”

The mother of 14-month old twins, and a first-term state representative, McDonald has been a voice for the lobster industry and for the women working in it. A placard next her portrait notes that she was the first woman appointed to the Maine Lobster Advisory Council and the first female commercial fisherman elected to the Maine House of Representatives. Several years ago she led a social media campaign and then worked with Grundens to start making fishing gear designed for women.

Yvonne Rosen of Vinalhaven stood in front of her portrait proudly talking about her boat, a 30-foot H&H named Gimmie A Hulla, and the 760 traps she fishes. When posing for photos she happily showed off her tattoos, a lobster on one arm and a fish on the other. She’s been captain of her own boat for 11 years and until fairly recently was the only woman captain in Carvers Harbor.

White came up with the idea for this series a year or so ago while watching a woman unload traps from the back of a boat onto a snowy dock in November. “I was totally impressed with how hard she was working, and because I know her, I know her feminine side. There is just that contrast,” she said.

That contrast was on display at the opening. Many of the women standing in front of their portraits were wearing dresses and makeup. McDonald was regal and feminine in deep red lipstick, jewelry and a flattering black dress.

White, whose husband is a part-time lobsterman, based her paintings on photos that she took, as well as photos submitted by the women themselves and other photographers. She made the paintings extra large, “because I wanted these women to be big and strong.” 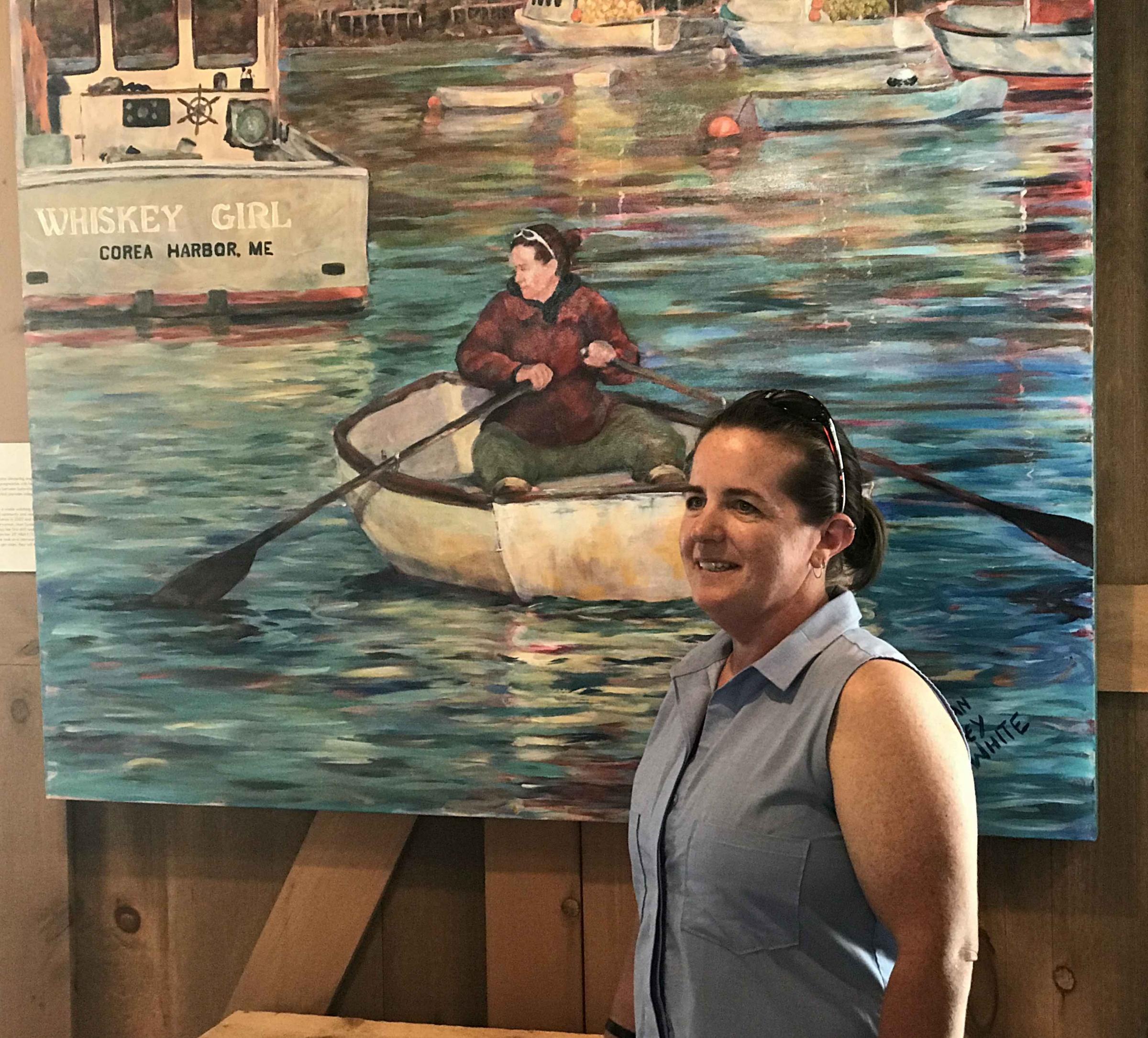 Today out of about 4,500 licenses for lobster fishing in Maine, just 215 are held by women captains. Another 305 women have licenses to be students or apprentices in the lobster fishery. If those women complete that program and put in the required 1,000 hours of fishing to earn a license the number of women captains could increase dramatically, according to Cathy Fetterman, the head of licensing at the Department of Marine Resource. Many more women are working as sternmen and at the docks.

McDonald said the growing numbers of women in the industry is having an impact. “Women are more keen on environmental issues; women are more articulate speakers; women as a voice for the industry are going to be heard,” she said emphatically. “When women have a seat at the table things get done.” 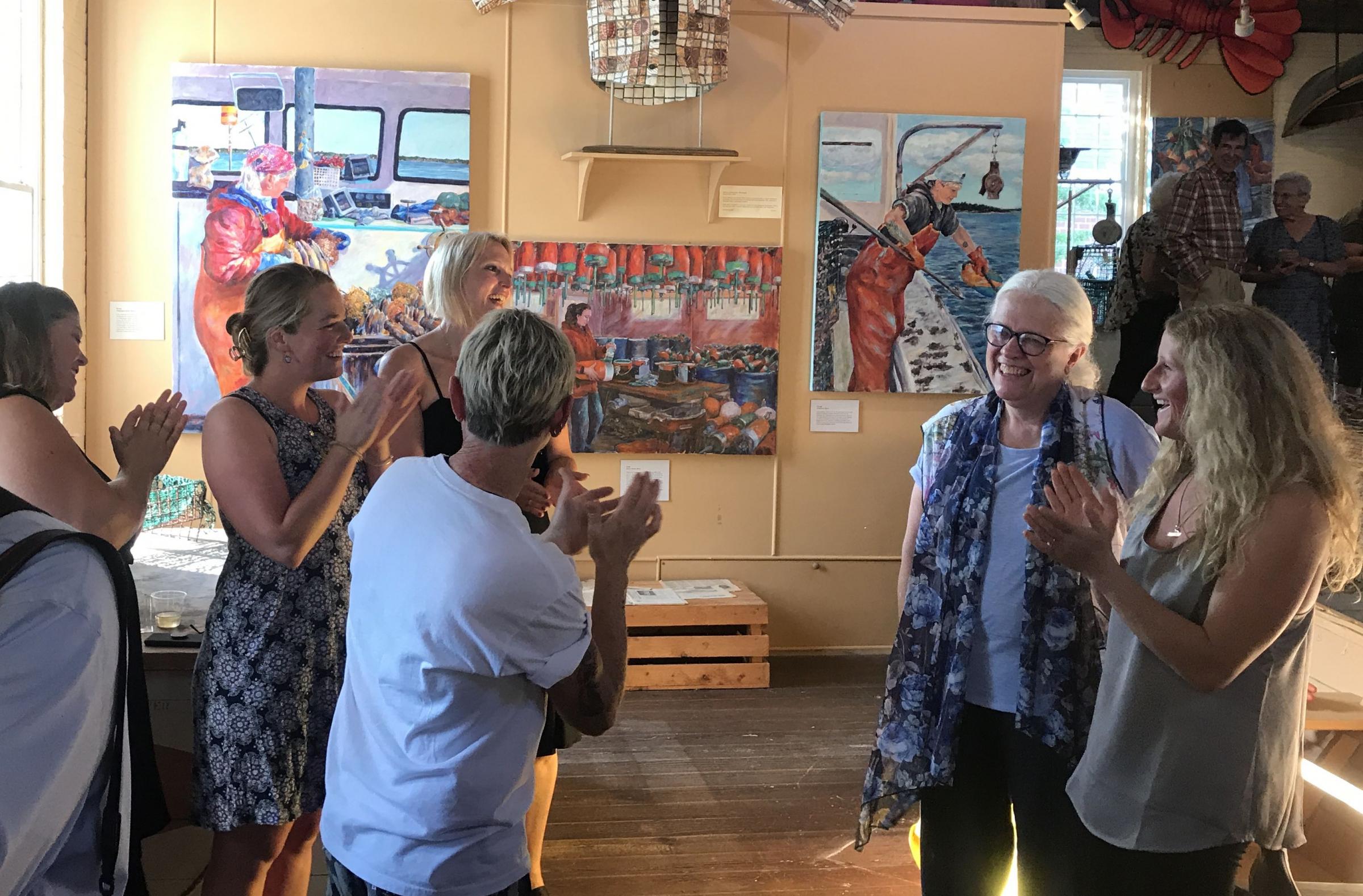 The exhibit at the Penobscot Marine Museum is on display until Oct. 20, 2019.