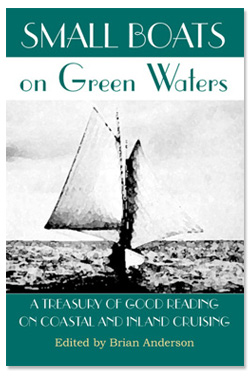 Small Boat Anthology
edited by Brian Anderson and
published by Breakaway Books
Anthologies with a sea-going theme aren't so common as to be a dime a dozen, but over the years enough to fill a good bookshelf have been published. Saltwater poetry is big; so, too, is man-against-the-raging-sea. But alongshore small-boat adventuring? Pretty thin. So it's a genuine pleasure to find the new Small Boats on Green Waters: A Treasury of Good Reading on Coastal and Inland Cruising, edited by Brian Anderson and published by Breakaway Books. With chapters by Robert Louis Stevenson, John McPhee, Stephen Jones, Robb White, Farley Mowat, Kenneth Grahame, John Muir, Jerome K. Jerome, Mark Twain, Anthony Bailey, and more, it's a piece of work. I'm proud to be included among such company -- (damn proud, he says, pounding his hairy chest) Contents, Small Boats on Green Waters * The Sambre to the Oise: The Oise in Flood, from An Inland Voyage, 1877; Robert Louise Stevenson * From The Survival of the Bark Canoe,1975; John McPhee * On the Meuse, from A Thousand Miles in the Rob Roy Canoe on Rivers and Lakes of Europe, 1866; John MacGregor * Life During Wartime, from The Unlikely Voyage of Jack de Crow; A. J. MacKinnon * The Piper at the Gates of Dawn, from The Wind in the Willows; Kenneth Grahame * Art Is All of a Ship But the Wood, from A Week on the Concord and Merrimack Rivers; Henry David Thoreau * We Agree That We Are Overworked, and Need Rest, from Three Men in a Boat, 1889; Jerome K. Jerome * Rowboat, 2006; Peter H. Spectre * The Cruise of the Dolphin, from The Story of a Bad Boy, 1870; Thomas Bailey Aldrich * Shantyboats and Cranes, from Four Months in a Sneak-Box, 1879; Nathaniel H. Bishop * Rudy, from The Journals of Constant Waterman, 2005; Matthew Goldman * In Need of a Breeze, from The Journals of Constant Waterman, 2006; Matthew Goldman * Down the Susquehanna in a Canoe, from Athletics and Manly Sport, 1890; John Boyle O'Reilly * Stormbound on Michikamats, from A Woman’s Way Through Unknown Labrador, 1908; Mrs. Leonidas Hubbard, Jr. * Auroras, from Travels in Alaska, 1915; John Muir * Time on the River, 2006; Brian Anderson * First Cruise, from The River at Green Knowe, 1959; Lucy M. Boston * On the Turbulent Death of Blackbeard the Pirate, from A General History of the Robberies and Murders of the Most Notorious Pyrates, 1724; Captain Charles Johnson (Daniel Defoe) * The Battle of Lake Champlain, from The Naval War of 1812, 1882; Theodore Roosevelt * Letters to Jefferson, 1803; Meriwether Lewis * A Cub-Pilot’s Experience, from Life on the Mississippi, 1883; Mark Twain * The Johnboat, from Shantyboat: A River Way of Life, 1953; Harlan Hubbard * The Spy, from The Riddle of the Sands, 1903; Erskine Childers * The Zuider Zee, from The Falcon on the Baltic, 1888; E.F. Knight * The Ship and the Man, from Racundra’s First Cruise, 1923; Arthur Ransome * Swallows in the Dark, from Swallows and Amazons, 1930; Arthur Ransome * Building Spray, from Sailing Alone Around the World, 1899; Joshua Slocum * The Cruise of the Mascot, from The Boy, Me, and the Cat, 1912; Henry Plummer * Northward to Seymour Inlet, from The Curve of Time, 1968; M. Wylie Blanchet * Pleistocene Creek, from How to Build a Tin Canoe, 1999; Robb White, Jr. * The £200 Millionaire, 1932; Weston Martyr * Finding Princess, from Princess New York, 1953; Joe Richards * The North Sea, from Hills and the Sea, 1906; Hilaire Belloc * Naming and First Cruise, from The Thousand Dollar Yacht, 1967; Anthony Bailey * Farley Mowat Buys a Boat, from The Boat Who Wouldn’t Float, 1969; Farley Mowat * Chartering, from An Old Gaffer’s Tale, 1984; Martin Eve * Pierheads in Bad Weather, from Last of the Sailormen, 2001; Bob Roberts * Stand Up for Short Voyages, from Short Voyages: Forays Along the Littoral, 1985; Stephen Jones

Thrilling Sailing on a Flying Fifteen