Notes from a Neophyte Nature Lover 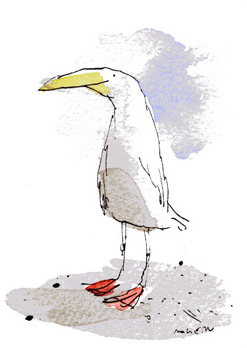 Illustration by Caroline Magerl
I have a confession. It’s probably the wrong way to begin the first installment of a column about birds and nature, but I figured I’d get it off my chest now so you can decide up front if this is the kind of thing you want to fritter away five minutes reading each month. My confession is that I like sea gulls. There are multiple problems with this affinity. First of all, as most any birder worth his binoculars will tell you, there is no such thing as a sea gull. A herring gull, yes—or a black-backed or laughing gull—but there is no species called sea gull. Second, the birds that folks refer to as sea gulls are known for annoying humans and wildlife alike with such miscreant behavior as stealing french fries, taking over islands and driving out other seabirds, and letting loose on the heads of tourists happily eating ice cream beside Camden Harbor (guess who that happened to). So why the heck do I like sea gulls? Well, have you ever really looked at a herring gull? I’m serious—not just glared at it as you shooed it away, but really looked at one. They’re beautiful. Their chest feathers are pure white, their wings soft gray like shingles on an old cottage. And their eyes—they give you the chills, they’re so sharp and yellow. Plus they have that neat red dot on their beak that their chicks peck at when they’re hungry. Herring gulls sound cool, too. Their call is such a part of coastal Maine’s soundscape it’s easy to tune it out, but it’s mysterious and thrilling, at least for this Pennsylvania transplant who spent long landlocked hours each summer desperate for her family’s next trip to the coast. In addition to—or perhaps to qualify—my confession, I also have a theory birders would love herring gulls if they weren’t so ubiquitous. Pigeons and crows and starlings, too. It’s only because there are so many of these birds around that people don’t get excited about them. But why do birds have to be rare or unfamiliar to be valuable? Why does anything have to be rare or unfamiliar to be valuable? (Fledgling p.2) Not too long my mother came to visit from Pennsylvania (I often wonder if anyone would visit if I didn’t live in coastal Maine). As she sat at my dining room table organizing the recipes she had been clipping and saving for me, I started to look at her. I mean, really look at her, as if I had never seen her before. I thought I knew what she looked like—my own mother—but I was wrong. Her forehead was wider. Her nose was rounder. Her eyes were so much bluer. “Mom!” I suddenly exclaimed. “Your eyes are so blue!” She looked up from a recipe for pot roast with the bemused smile of a saint. For 27 years I had been pecking at my mother demanding food and love and money to buy ice cream and french fries, but I had never really looked at her. I shook my head in amazement. How often do I fail to see the familiar yet extraordinary creatures in my life? So there you go. I like sea gulls, I’m originally from Pennsylvania, and I don’t even look at my own mother. But if you want to read this column about Maine’s nature, I would be honored. I can’t promise dead-on natural history descriptions or leads to the latest off-course vagrants, but I can promise my sheer delight in wildlife and what it can teach us about life, if we just take the time to look.

Marie Malin is a freelance writer and editor who lives in Falmouth. This fall she'll begin study toward a Master's of Divinity at the Portland campus of Bangor Theological Seminary. A graduate of the College of the Atlantic, Marie was the communications coordinator at Maine Audubon for six years. In addition to Maine Audubon's journal Habitat, which she edited, her articles, essays, and poems have appeared in Maine Boats, Homes & Harbors, Maine Times, and Down East. Marie loves to surf, hike, and get lost on Maine's back roads.