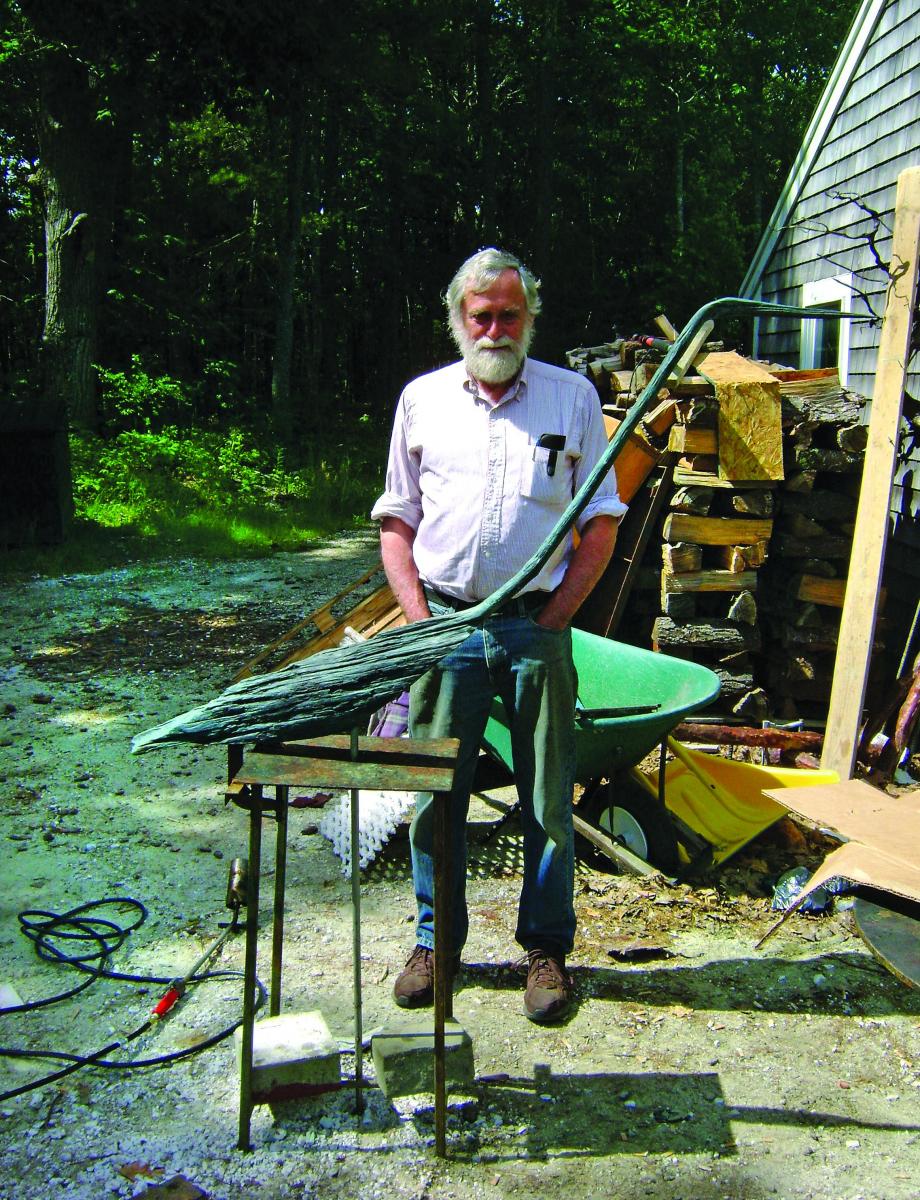 Artist Dan West works mostly in wood, but recently one of his herons was cast in bronze at the Somerset Sculpture and Foundry in West Bath. Here he checks on the work in progress. Photo courtesy Dan West When Dan West moved to Maine, in 2000, he had decided to stop building boats, his livelihood up until then. His wife, Kyra, helped him make the call. At the time, he had been making fiberglass kayaks on Martha’s Vineyard. He remembers Kyra putting her foot down: “Okay, buster, when you get to Maine, no more styrene, no more acetone—you’re using something else.” So he took his talent for making things into a new arena and became a full-time sculptor.

He had begun experimenting with art earlier, making weathervanes—mainly codfish and roosters—and selling them in a local shop on the Vineyard in the late 1980s.

His artistic sensibilities come from a lifetime of designing and building boats, including several classic skiffs, he said. And he has been around birds and fish all his life. So it wasn’t such a leap to shift his full attention to sculpting, and to embrace a variety of wild creatures for his subjects.

West takes as much pride in his sculpture as he does in one of his famed Tashmoo skiffs. Only a few minutes into an interview at his home in Friendship, he sought his guest’s understanding. “I get very excited about things,” he said, “so please bear with me.” He and Kyra live in a 1900s-style cottage that overlooks a stretch of the Meduncook River, which separates Friendship from Cushing. They built everything in the house, including the doors and windows, which is not suprising considering the nature of West’s sculptures and talents.

The large main room features examples of his work in just about every corner and on every shelf, mixed in with an array of paintings and objects by artists the couple admires—including William Irvine, Edwin Gamble, and John Neville.

Most of West’s sculptures are created from found materials. His “pallet bears” are made from the arced openings of wooden pallets where the forklift forks pick them up (he noted with disdain how the openings on newer pallets “are square”). With a minimum of shaping and a little bit of paint, he transforms these weathered parts into polar bears—sleek, dynamic, charming.

West’s aesthetic draws in part on Inuit art, which has always fascinated him and which he and Kyra have collected over the years. He is also a longtime admirer of Edwin Gamble (1923-2006), whose sketches and sculptures of birds were heralded for capturing the essence of their subjects, often to the point of abstraction. 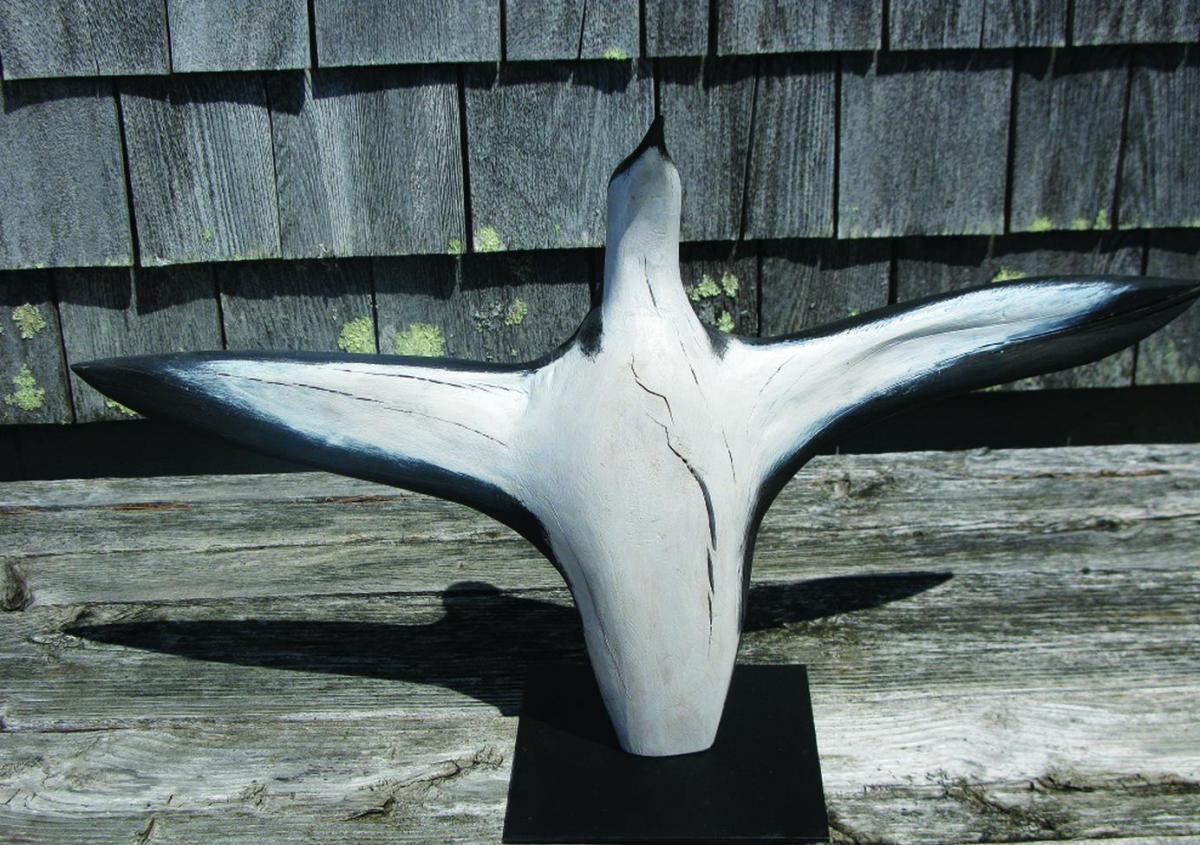 West has a particular affinity for birds. Here is Murre, (2015, 21½" x 14" x 3") made from a piece of driftwood root. Photo by Krisanne Baker, courtesy Caldbeck Gallery Like Gamble, West is known for his birds, specifically cormorants and great blue herons. Drawn to their curves, he has made many sculptures of them over the years. The transformations are often ingenious: an old oar found in Nova Scotia becomes a diving cormorant, for example.

Recently, one of his herons was cast in bronze at the Somerset Sculpture and Foundry in West Bath. The artist can’t say enough about the foundry’s owner, Digby Veevers-Carter, whom he calls a master. In addition to the heron, the foundry has cast a life-sized hovering hummingbird, a swimming cormorant, and a perched kingfisher. These bronze works allow West to produce small editions of one-of-a-kind pieces (he is often asked to copy a sculpture). He likes to underscore their timelessness: “I tell people these pieces are going to be sitting on your table after the pyramids have tumbled.” 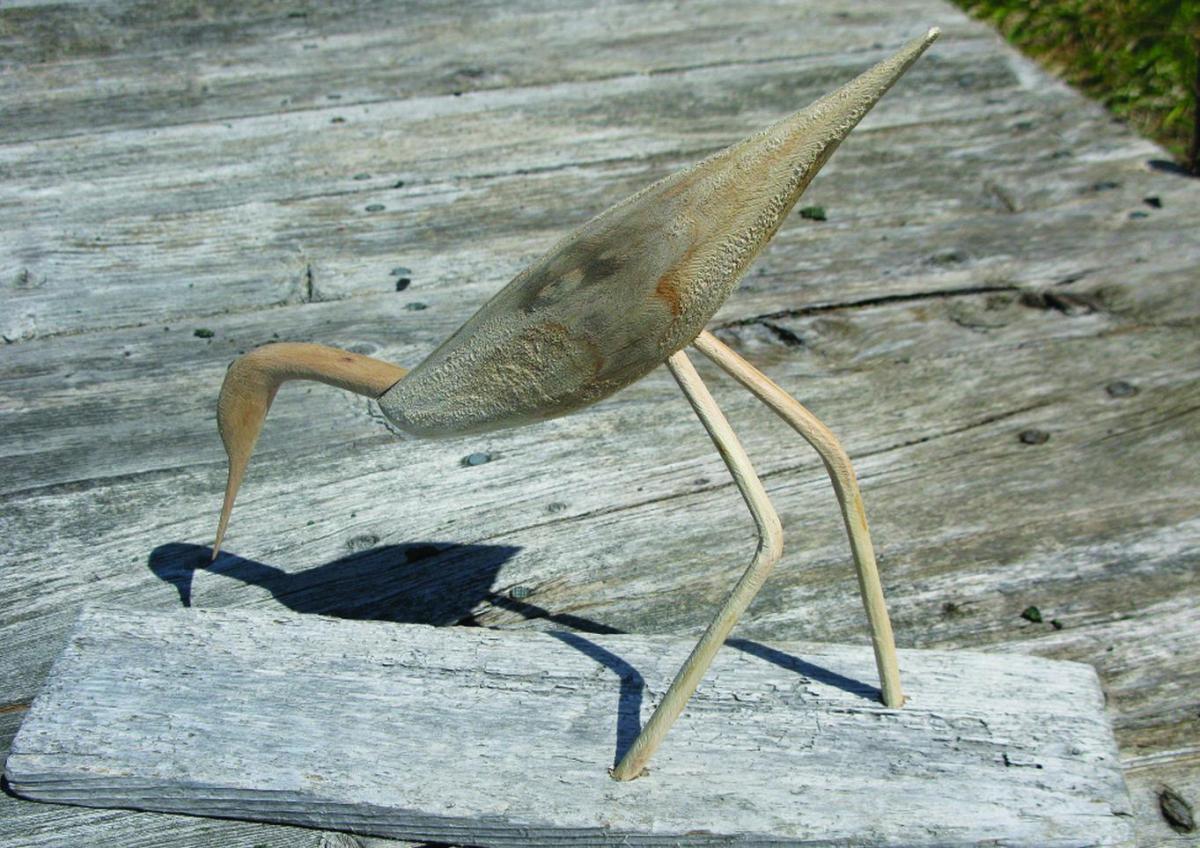 Yellow Leg Feeding (2015 13" x 9" x 4½") is made from spruce and driftwood. Photo by Krisanne Baker, courtesy Caldbeck Gallery Fish are also a favorite subject. West will take a piece of slash wood—the leftover remnants from a sawmill—shape it a bit, add pieces of zinc for fins, and voilà, he has a handsome wall sculpture. He leaves most of the surfaces of his sculptures natural, but when he adds paint, it is always urethane, never acrylic, because his pieces sometimes end up outdoors, and acrylic does not weather well.

West chooses some of his materials for their specific characteristics. For example, he loves viburnum because the branches separate opposite each other at the same angle. He has created a variety of creatures using the branches from this shrub, including a shark and a stunning crab with symmetric legs. A major source of material is Advocate Beach in Nova Scotia, which the sculptor describes as being three miles long and, as he stretches out his arms as far as they’ll go, “this deep in driftwood.” He and his wife spent 12 summers in Lunenberg (their house in Friendship is modeled after their Nova Scotia digs). 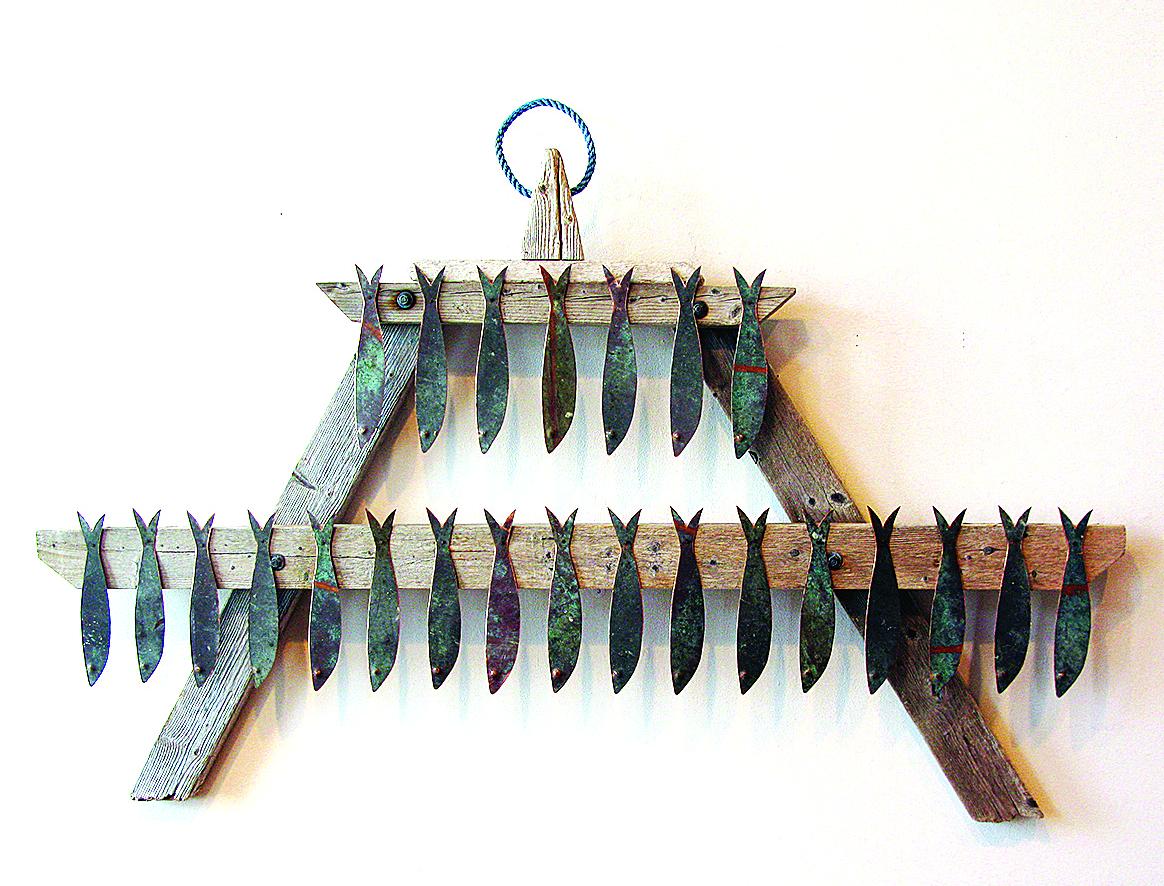 Pieces of beach driftwood form a rack for rows of copper fish in Drying Fish (37" x 60" x 3"). Much of the metal in West’s art is recycled from the Treasures and Trash Barn in Searsport. Photo by Krisanne Baker, courtesy Caldbeck Gallery West makes what he feels the material calls for: a stingray, a Holstein cow, an ocean sunfish, an octopus, a porcupine. “It actually makes my job as an artist easier because the foundation for what I end up making is already there,” he explained.

The metal in his pieces is recycled, too. Much of his supply comes from the Treasures and Trash Barn opposite Hamilton Marine in Searsport. “The owner saves all kinds of sheet scrap metal for me,” West said.

In 2008, West was interviewed at his barn workshop by two local six-graders as part of an oral history project. The list of other interviewees attests to the bounty of area artists, including painters Sam Cady, Ralf Feyl, Katharina Keoughan, and Cecily Aikman, and photographers Jeremy Barnard and Jed Devine. 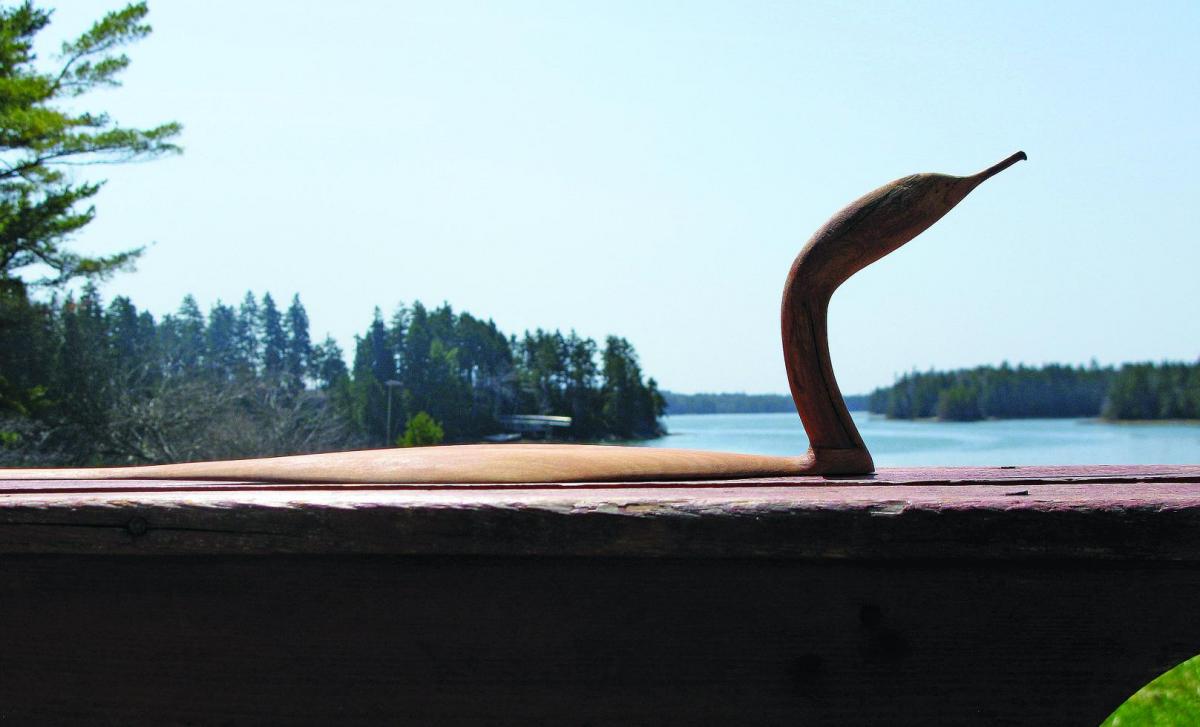 West is known for his cormorants, such as Swimming Cormorant (2015, 6" x 20" x 4"). The sculpture, displayed on an old anvil, shows only the part of the bird an observer might see above the waterline. Photo by Krisanne Baker, courtesy Caldbeck Gallery To the question, “Do you begin with an idea in your head, or do you sculpt whatever you see that catches your eye?” West told his young interviewers, “I see things in other things.” He also described for them a nine-foot-tall ostrich he had made out of “the most outrageous things you ever saw,” including “David Neubig’s old worn-out lobster trap rope that was all unraveled into a great big frizzy mass.”

When he isn’t sculpting, West collects and restores antique engines, which he considers works of art. His barn workshop is chock-a-block with all sorts of machinery: motorbikes, steam toys.   “I buy, sell, trade; we go to shows,” he noted. Elsewhere, neat piles of driftwood and other materials hold the promise of future sculptures while half models on the walls speak to his former life. 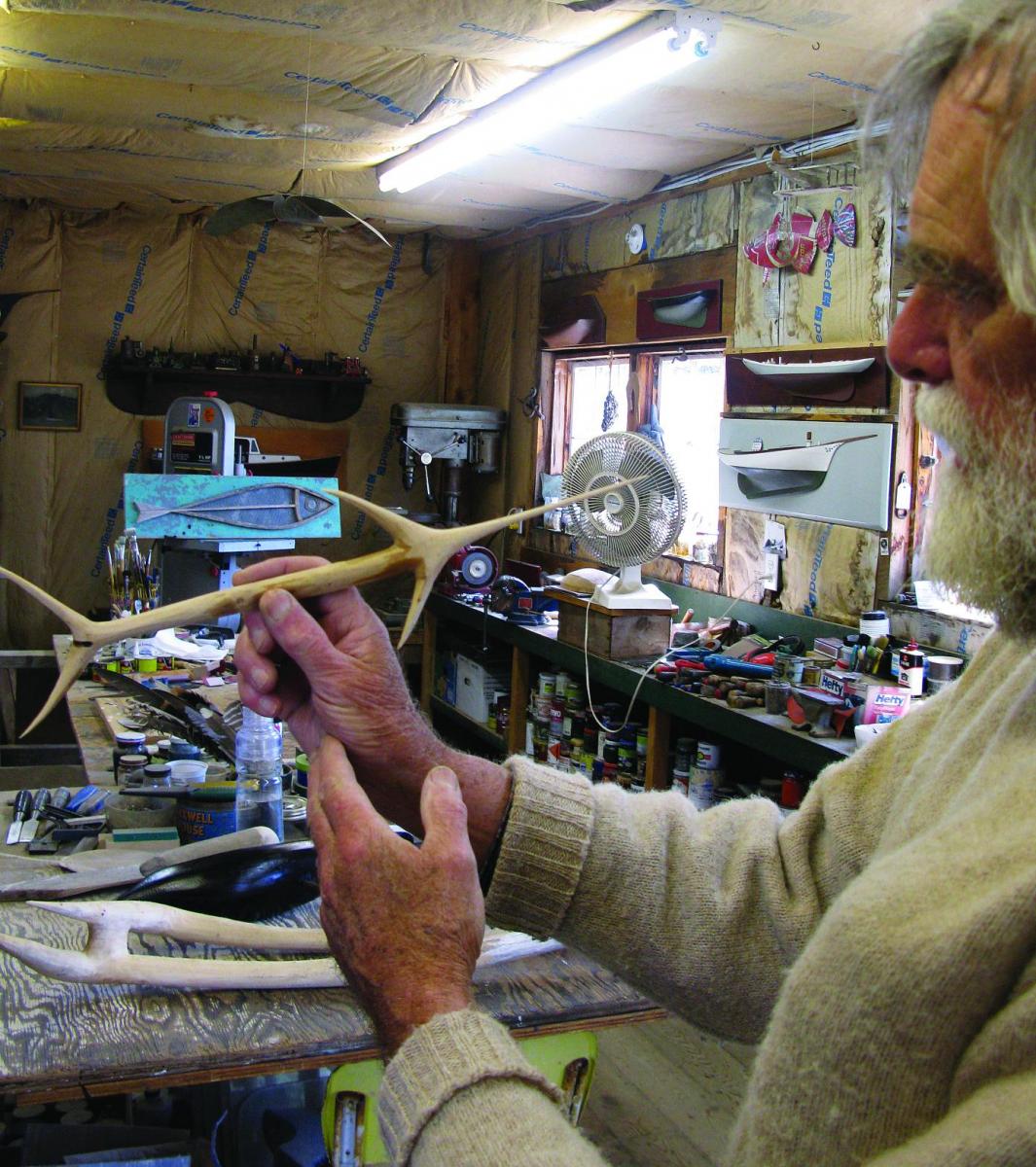 West at work in his studio figuring out what creature to fashion from a piece of viburnum wood. Photo by Krisanne Baker Nathaniel (Dan) Eldridge West, who was born August 28, 1942, on Martha’s Vineyard, comes from a nautical family. He credits a “wonderful grandfather,” Wilfrid O. White, with starting him on his way. “He turned all of his grandchildren loose in a huge barn full of woodworking tools with minimal instruction,” West recalled. By the time Dan was eight, he knew how to use a chisel, a drawknife, a spoke shave, and other tools.

This same grandfather started a nautical instruments company in Boston that was sold to Danforth Anchors around 1955. Dan’s middle name, Eldridge, ties him to the Eldridge Tide and Pilot Book, first published in 1875 and still printed yearly.

West sold his boatbuilding business, Machine and Marine, in 1988. He and his wife lived for a time on the Maine island of North Haven before settling in Friendship, which reminded West of the way the Vineyard was when he was a kid. Their 38-acre parcel offers easy access to the river and the open ocean is about a mile away. The couple keeps an 18-foot Tashmoo skiff on a mooring for exploring.

West also liked the town’s connection to boats. He has always been an admirer of Friendship sloops—there has been one in his family for many years. “So it was kind of a fortunate coincidence, as far as I was concerned,” he noted, “that I ended up in the town where Friendship sloops became famous.”

In the early 1990s West started working with the Granary Gallery on Martha’s Vineyard (he is still represented by them). He eventually was taken on by the Caldbeck Gallery in Rockland, one of the foremost art venues in Maine.

To fully appreciate his work one should see it installed, as it was in a remarkable exhibition this past summer at the Caldbeck. Here you could admire the shadow play of a series of small sea gulls affixed to a length of driftwood, delight in the arc of a rooster’s tail against a white wall, or smile at the repurposing of a lobster crate into a “Crate Blue Heron.” Simply stated, West’s menagerie is marvelous.

Dan West is represented by Caldbeck, June LaCombe, and Littlefield galleries in Maine and the Granary Gallery on Martha’s Vineyard.