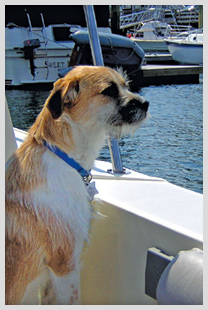 Skipper
Skipper is a salty little dog. He lives on Hodgdon Island down Boothbay way, where the local dockwallopers allow him to think he’s in charge of the waterfront. In reality he isn’t, because deep down inside they know and he knows that he has a fundamental flaw: the place of his birth. Born in Arkansas and shifted about for reasons unknown, Skipper was rescued from a pound in that state and eventually brought to Maine. In other words, he might look like a salty little Mainer, and he might act like one, but the truth is, he’s not. He’s From Away. But don’t be fooled by that deficiency. Mess with him on the docks at the Boothbay Region Boatyard, most especially mess with his boat, the Albin 28 Tournament Express Curmudgeon, and you’ll find out pretty quickly that he might be a terrier mix from the hinterlands, but he’s a tough little customer nevertheless.