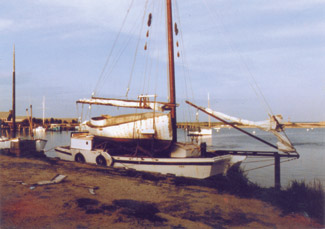 Sailing scow Lily with catboat cargo aboard.
A Catboat Cargo The photo of Buckley Smith’s scow sloop Banjo carrying a Volvo in the winter issue of MBH&H, #107, reminded me of a bizarre coasting voyage from Rhode Island to Martha’s Vineyard made by the commercial sailing scow Lily in 1981 (see photo). A Vineyard friend had been given a derelict 26-foot catboat he had spotted in a yard in Hope Valley, Rhode Island. To transport the boat to the island he talked a reluctant Richard Brown—builder, owner, and skipper of the Lily—into loading it in Galilee and sailing to Oak Bluffs on the Vineyard. Off Woods Hole in Vineyard Sound the scow nearly capsized in a rip of converging currents. Loading and unloading the cat were separate adventures, involving cranes. While we watched, we expected the tired old hull to disintegrate. Last I heard of the Lily, it was somewhere in Maine.
Dan West
Friendship, Maine
More on Chewonki I enjoyed the article on Camp Chewonki by Jenny Bennett immensely (April/May 2010, MBH&H 109) and thought that a little additional history regarding the foundation of Split Rock and Chewonki might be welcome. The camp at Split Rock was the brainchild of my father, Alfred Wilson Douglass—then a sophomore at Country Day School—Clarence Allen (his favorite science teacher), and my grandfather, Alfred Douglass. My father and Clarence, known affectionately as “Skipper,” canoed more than 1,200 miles in 1914, in search of a suitable site in northern New York. They settled on Whallon Bay, on the western shore of Lake Champlain near Split Rock. Using tents from the Spanish-American War, they established a tiny camp for boys, which went well—that is, until a lad was bitten by a timber-rattler. The boy survived, after a wildly anxious trip to Crown Point aboard my grandfather’s steam-launch Thetis, but that incident convinced all hands, including Clarence Allen, my grandfather, and his best friend, Henry Lee Higginson, to move the camp to Maine. Grandfather Douglass contemplated relocating it to Ledgemere Point, in Five Islands, an area he had purchased in 1905, but Clarence felt that it was too exposed to the winds off the Atlantic. After reconnoitering the inland and upriver area in the winter of 1916-17, they settled on Chewonki Neck, with its two farms and more than 400 acres. They purchased it for $800! I believe the first summer of Camp Chewonki was 1917, and my father, now a freshman at Harvard, was its first official head counselor. He celebrated his elevated responsibility by planting more than 30 white pines on the drive in to “The Farm House.” Many are still there today. The second season began in 1918, although some consider it the first “full” season. Several boys, largely from Country Day School, joined, and my Uncle George, though only eight at the time, became “The First Camper.” He was always introduced as such at the wonderful “Campfire” ceremonies when he visited years later. Camp Chewonki remained small, but grew steadily. “Hardy” Ellis took over the head counselor’s reins from Skipper Allen, and he and his son, Tim, made the camp flourish. Don Hudson continued that growth, and to think that he, now a PhD, started his administrative phase as my junior counselor! As the son of the co-founder, I feel especially proud of the role that my father took. I have met “Chewonki Boys” all over the world. One, in Bermuda, was the head of the major newspaper there, and I met another in Sydney, Australia, of all places. Excelsior, Chewonki!
Fred Douglass
Cataumet, Massachusetts


On Bow-Riding The cover of your April/May 2010 issue (MBH&H 109) illustrates something that yachting magazines in general tend to perpetuate—namely, children on the bows of boats wearing no PFDs and/or having no pulpit to hang on to. Frankly, I think that you will agree that this sets a bad example for the uninitiated. I may be old-fashioned, but it is still questionable conduct, and a magazine of your caliber should set an example of good, rather than bad, seamanship.
Ned Gruener
Camden, Maine

We have received several similar letters of admonishment and understand—and appreciate—the issue. — Eds.