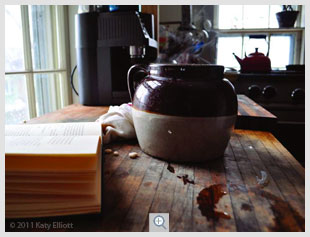 Photograph by Katy Eliott. Click on image to expand.

A while ago we tackled the making of a proper chowder. This time we take on baked beans. As usual, we welcome your comments.

Peter Spectre, notable for what his grandmother called “big eyes and a little stomach,” writes occasionally about Maine’s restaurants. Eileen Spectre, a cook’s cook, is his technical advisor.