Adventures in a Boston Whaler shaped an artist’s world vision 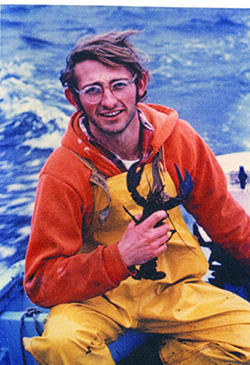 Hopkins could not find a photograph of his old boat, so, artist that he is, he painted this portrait of it instead. Illustration by of Eric Hopkins
After removing the steering console and seats, I strapped on an old 20-hp Johnson outboard (with a tiller). For years I hand-hauled lobster traps around the Thorofare and in Southern Harbor in that boat. Lobstering was a good excuse to explore the edges and ledges where land, water, and sky meet. I deliberately hauled at low tide to get glimpses of the dark holes in the rocks and kelp where the shedders hardened their shells. I loved seeing the mysteries of what each trap might bring. 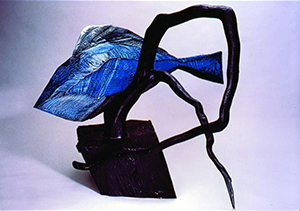 Eric Hopkins' sculpture, Blue Fish, 1988, painted wood, 48"h x 56"w x 30"d, will be included in a major show of his work at the Penobscot Marine Museum in Searsport this summer: Shells, Fish & Shellfish. The show will complement the museum's summer exhibit Fish, Wind and Tide: Art and Technology of Maine's Resources. For more information go to www.penobscotmarinemuseum.org. Hopkins is represented by Dowling Walsh Gallery in Rockland (www.dowlingwalsh.com). Photo courtesy of Eric Hopkins
As much as I liked catching and selling lobsters, I was more interested in the wonder of underwater activities-the patterns and cycles of life and death in various stages. I marveled at the complex, translucent plankton floating on the surface of the deep green water, including small lobster larvae that would grow into adult lobsters that I might catch someday and maybe even eat. Looking back, that little reborn boat was my personal research vessel. Periodically I'd unload my lobster gear, throw in a sleeping bag and a tarp and head out to explore the small islands around North Haven. Without the seat and console, there was room in the boat for me to curl up and get a few hours of mosquito-interrupted sleep under a dark sky sparkling with billions of little starlights. No matter how little sleep I had gotten, I always loved the anticipation of the soft glow of another new day. Illusions of Grandeur transported me to the world of wonder that has influenced my life's work reflecting on nature, science, history, and art. The pursuit of my childhood boat fantasy ended up providing a rich personal connection to the grandeur of life on this blue marble of an island that we call Earth, which is truly a blue marvel. Eric Hopkins, who grew up on North Haven and studied art at the Rhode Island School of Design, has exhibited his paintings and sculpture in galleries and museums across the country. Read more musings on the Boston Whaler in "A Ticket to Ride" by Bill Mayher.