By Rob McCall
Whan that Aprille with his shores soot The drought of Marche hath perched to the roote And bathed every veyne in swich licour Of which vert engendered is the flour… So priketh hem nature in hir corages, Than longen folk to goon on pilgrimages.
—from Geoffrey Chaucer’s Canterbury Tales, late 14th century
Dear Friends: It is April, and Nature—unperturbed—is carefully, calmly, lovingly, and honestly doing what she has always done at this season since long before human folly. Nature remembers in eons, not in years. She cares little for our horrible history. As always, the red-winged blackbirds have returned to these parts with their thrilling liquid trilling, surpassing Mozart or Schubert. The finches and chickadees have chimed in with their delicate descant. The ravens soaring over the town and the mountain have added their gurgling alto to the chorus. The freed waters of the mill brook now take up the tenor part, and the tidal falls the bass. The downy, hairy, and pileated woodpeckers and the partridges begin drumming on dead trunks and logs their percussive accompaniment to this first movement of the symphony of spring. 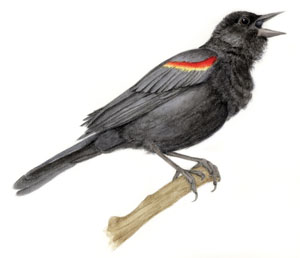 Illustrations by Candace Hutchison (3)
The vast open-air concert hall that is the North Woods is not as bleak as it was even a week ago. It is being decorated with subtle colors and arrangements that would make Martha Stewart weep. The sap is rising in the oaks and maples. The fine branches of the swamp maples are turning red against the gray as their buds push out. The bark of the red oaks is swelling to show stripes of dusty rose between the gray we have seen all winter. The dark wands of the pussy willows are dotted with spots of near-white as their soft catkins push forth during the warmth of the day. Rank opinion We enjoy an exquisitely long season of spring in these parts, from Groundhog Day in early February until the apples and lilacs come into bloom at the end of May, a good four months. But our great comfort is in the ageless familiarity of this recurring, synchronous symphony. Our souls are stirred by its opening notes, like Beethoven’s fifth symphony, reminding us of the whole composition that will perform itself in the months to come: this concerto, this oratorio that has been hailed by a thousand thousand generations, and no critic would dare deride. Maybe we cannot clearly see, as the ancients could, the Great Composer and Conductor directing this symphony from a podium high above. But we can still watch and hear the great organic earth orchestra faultlessly responding with ageless and matchless skill and dedication to the motions of the invisible baton in the invisible hand. We can still revere the Conductor and the performers of this music of the spheres. We can still teach our friends, our children, and our grandchildren to shake off the death dirge of Winter and sing the song of Spring. We can still join the band, take up our parched, pale, and paltry instruments, breathe the dust off of them, and blow our own Ode to Joy. Saltwater report, early April The water in the bay looks like hammered stainless steel these April days, reflecting the metallic gray of the sky, but every now and then a bright sun will transform the bay to cobalt blue set with millions of glittering diamonds almost too bright for the eye to behold.
Spring picks up speed as the leaves begin to break out on aspen, maples, wild cherries, lilacs, apples, and other fruit trees.
Mountain report, early April Our mountain, Awanadjo—Blue Hill, Small Misty Mountain in the Algonkian language—is first veiled in mist, then draped with tatters of fog rising from the hollows below, then wrapped in cloud so as to be invisible, then looming over the town like a great brown bear asleep. They say if you can see the top of the mountain it is not about to rain, but if the summit is covered in cloud, reach for your rain gear. Seedpod to carry around with you From E.B. White: “The first day of spring was once the time for taking the young virgins in the fields, there in dalliance to set an example of fertility for Nature to follow. Now, we just set the clocks an hour ahead and change the oil in the crankcase.”

Natural and un-natural events, mid April April showers it is, not just dribbling from the eaves, but pouring in exuberant streams and coursing happily through every brook, stream, and ditch, raising a chant to delight the heart. The sun is higher than in March and the air is warmer. The ground responds by quickly greening and the buds of trees and shrubs agree with swelling pastels peeking out of their shiny sheathes; a hint of silver in the apple buds, a hint of red in the swamp maples, and a hint of yellow in the forsythia promising splendor yet to come. April showers come in several varieties. Last year at this time it was the dreary, clammy sort borne on the east wind off the ocean, bringing the kind of damp cold that laughs at your coats and hats and blows right through into your bones with all the creeping chill of the deep northern seas. Rain driven by wind thundered on the roof and hammered on the east side of the house and carved meandering rivulets through winter’s mud and sand. Field and forest report, mid April A few stalwart songbirds have returned, including song sparrows, white-capped sparrows, and slate-colored juncos. But the great homecoming will wait until May, when more and more songs will fill the air as each day goes by. Yellow colt’s foot blooms in the ditches, and deer nibble down the green shoots of daylilies in the yard. Rank opinion As without, so within. While the long winter takes its toll on the soul, we lose our selves piece by piece. Our colors fade, our songs fall silent, our spirits sink, our souls shrivel. But spring returns, bringing the songbirds, the daffodils, and the crocuses like lost pieces of our personalities coming home once more to find their familiar places in our hearts. Day by day our missing parts are returned, and we are completed once again. Like the world around us, we are warmed and filled and giddy with the puddle-jumping joy of it. Natural and un-natural events, late April Now that the frost is out of the ground in most places, the creatures Aristotle called “the intestines of the earth” resume their ageless, essential work of soil-making. Tiny piles of dark, rich earthworm castings have begun to appear wherever there is bare ground. During heavy rains, earthworms scurry to the surface and robins sing their joyful rain-song in anticipation of a hearty meal. With cocked head and careful attention, crows, too, can be seen stalking the lowly earthworm after a rain. Charles Darwin, who devoted a lifetime of study and his last book to them, wrote, “It may be doubted whether there are many other animals which have played so important a part in the history of the world as these lowly organized creatures….Without the work of this humble creature, who knows nothing of the benefits he confers upon mankind, agriculture, as we know it, would be very difficult, if not wholly impossible.” 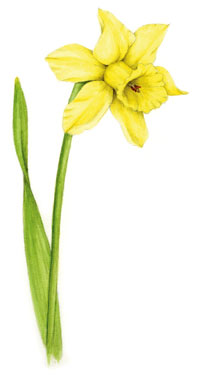