By Peter Bass
On the cover of the April/May 2012 issue of this magazine there is a boy steering a sailboat while wearing a wonderful, older-than-his-years expression. Steering a vessel at a young age is one of those events that can give you a feeling that you really are somebody important and capable of big things. You are trusted with the safe operation of a great machine. For me it was certainly a moment when I thought I might amount to something, an event that may happen any year now. The picture by Benjamin Mendlowitz (of course) was taken on the Concordia 31 Vital Spark. This gave me another wistful moment, not because I know this boat, but because I know the stories from whence came the name. If you have never read the stories of Para Handy and the crew of the small coastal freight boat Vital Spark as she steamed the rivers and lochs of Scotland, please try to find a copy. A friend from Cornwall in the UK presented me with the book (title: Para Handy) about a year ago, and I try to knock down a few stories every week or so. It is like a good friend who understands your absences and always treats you just as well when you return. The author is Neil Munro, who wrote the stories as a series in a newspaper in Glasgow. That’s enough information to start you on your quest to find Captain Para Handy. Back to the Boy on the Cover There is no age limit to the wonder of the first command. One of the children of our blended family came to visit in Boothbay one summer with a college friend who had grown up in Brooklyn and whose seafaring experience consisted of Staten Island ferry rides. We hopped into Grandmother’s launch and headed up Townsend Gut for a tour, quickly handing the wheel to Ron of Brooklyn, who gripped it with sufficient firmness that sap would have run out had it been wood. He soon relaxed enough to look around and yelled to no one and everyone, “I am driving a BOAT!” There may have been an adjective before “boat.” 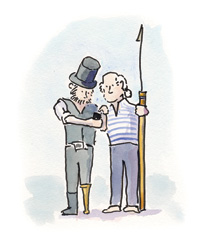 The Winner and Still Champion Sometimes I wonder why I am so fascinated to learn the same thing every year at this time and still marvel at it: Allen’s Coffee Flavored Brandy is again the best-selling spirit in Maine. The company from Somerville, Massachusetts, that produces the beverage generally sells a million bottles in various sizes for over $12 million dollars annually. In 2011, ACFB sales dipped slightly to 988,000 bottles and just under $12 million in sales. That’s the first sub-$12 million year since 2006. The peak was 2009 at almost $13 million, in the depths of the Great Recession. I am indebted to Bill Trotter of the Bangor Daily News for his obsession with the release of the annual “Drink.ME” report.
As a loyal Mainer, I have tried to embrace it as part of my culture, like eating blueberries and lobster...
Although the recession was a personal challenge, drowning my sorrows in ACFB was never on the agenda. As a loyal Mainer, I have tried to embrace it as part of my culture, like eating blueberries and lobster, but I can never quite get there. My fascination with ACFB is noted within my family and often results in birthday gifts of hip-pocket-sized bottles, so my mention again of ACFB’s dominance in Maine liquor sales will probably keep this gift-giving going on and on and on. It is OK to stop now, John. The Shoe Fits One thing that really caught our eye on the porch was yet another Bangor Daily News article, this one about the market for Maine hand-sewn shoes that continues and increases in the Far East. In the heyday of the Bass Weejun, GH Bass enjoyed an excellent export business to Japan, and that interest is building again, but not for Bass, whose current ownership shuttered the factories in Maine long ago and now has shoes under the Weejun brand made offshore. The Japanese interest is in the Maine connection, and several American brands, such as Ralph Lauren, Red Wing, and Quoddy Mocs are finding that the made-in-Maine brand is what sells. While several of the small hand-sewing factories in Maine make shoes for other brands, Quoddy makes and sells it own brand. 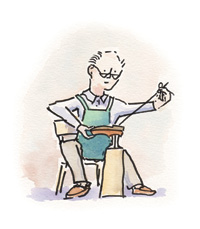 Bass, Dexter, and Sebago may have built this brand awareness in Japan and may still enjoy export sales there, but they are not in a position to enjoy the Maine-branded connection.
The Japanese interest is in the Maine connection, and several American brands, such as Ralph Lauren, Red Wing, and Quoddy Mocs are finding that the made-in-Maine brand is what sells.
When I last worked in the shoe business 25 years ago, Weejuns sold for about $80 a pair. They still sell for $80 a pair. Thanks to offshore sourcing, that price is the consumer expectation and will not change, so the likelihood that a big resurgence in Maine shoemaking will occur is slim. But we nevertheless celebrate the small victories of the several niche manufacturers who still thrive. My wife habitually sings “June is Busting Out All Over” on the first of June, and it is one of the year’s markers that I look forward to, much like the Drink.ME summary noted above or the Elver Chronicles. What are your markers? On the porch we used to celebrate the Bass Family National Holiday, which happened to be my Dad’s birthday in August, and was an MFO, or mandatory family outing, not that we minded. In deference to our employers who did not recognize this particular national holiday, we usually designated a Saturday before or after as the “holiday observed” when it fell on a weekday. All families have these annual markers that are theirs alone. Enjoy yours and the special time that is summer in Maine. Drink a toast and look to sea If you can with A.C.F.B. If you can’t, do not despair You can use Froid Riviere. Time is short, it’s already June; The season’s over all too soon. Before the days are short and darker Celebrate each family marker. Recall Cousin Sally and Uncle Eddie Feet up, binoculars at the ready.